Do lobsters possess a nervous system to feel pain?

I was reading an article, which it mentions that lobsters do not have a nervous system:

Lobsters have very poor eyesight and no nervous system. They walk slowly on the sea floor but are capable of swimming backwards by the curling and uncurling movement of their abdomen.

But in Wikipedia, I read that only 3 types of multi cellular animals do not posses a nervous system:

The only multicellular animals that have no nervous system at all are sponges, placozoans, and mesozoans, which have very simple body plans.

Which none of them seemed like a lobster to me. In this answer, it is claimed that every living organism feels pain somehow.

Now I would like to know the answers of these questions:

To answer if lobsters have a nervous system: 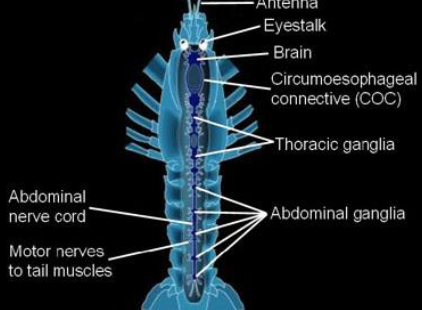 Yes they feel pain, at least in certain areas of their body without a doubt. Research has been done to test whether they feel pain consciously (a signal to the brain that is perceived allows for learned response) or if it is just a reflex response (Nociception), and there is good evidence they actually perceive it especially in the antenna.

Before answer, What intuitively seems:

The nervous system of arthropods consist of a 'brain' in the form of dorsal- ganglion , connected by a nerve collar around the gut to the first ganglion of the ventral- nerve cord. The nerve cord is double, with segmental ganglia. Probably because of the heavy external skeleton, the arthropods have a great variety of sensory organs connecting their central nervous system with the external environment.

they have a small brain behind their eyes and a series of ‘mini brains’ or ‘ganglia’ (the plural of ganglion) in the nerve cord that runs along the body on the ventral (underneath) side.

Here are some screenshots from the above mentioned Google book article. 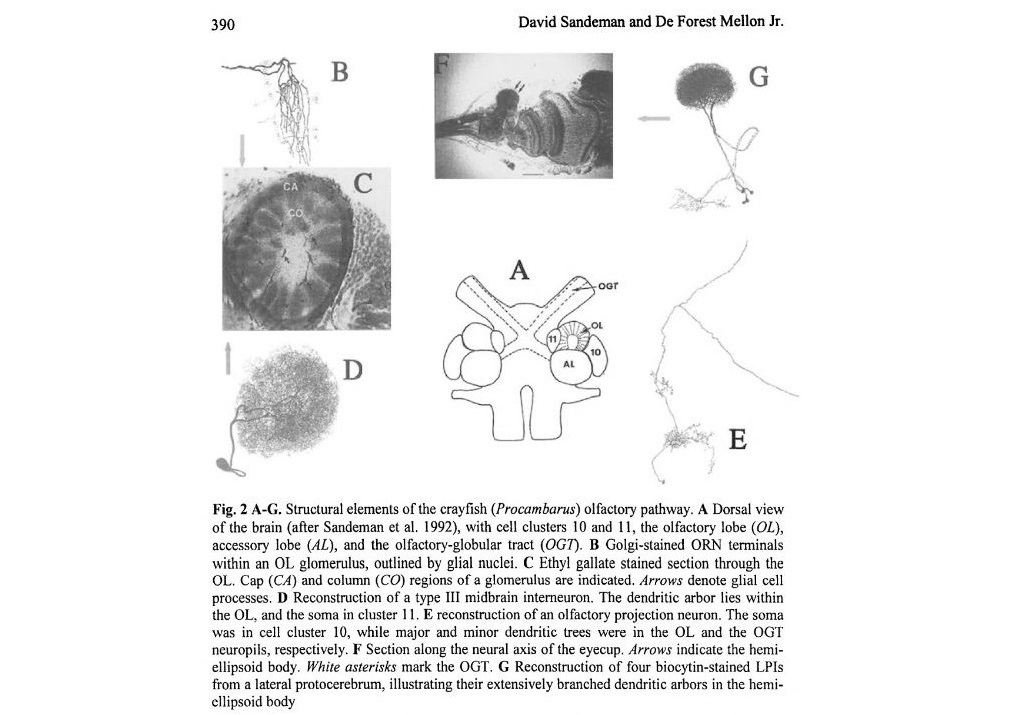 Diagrams and photos of nerve-features of Procambarus, a crayfish(not to be confused with fish). 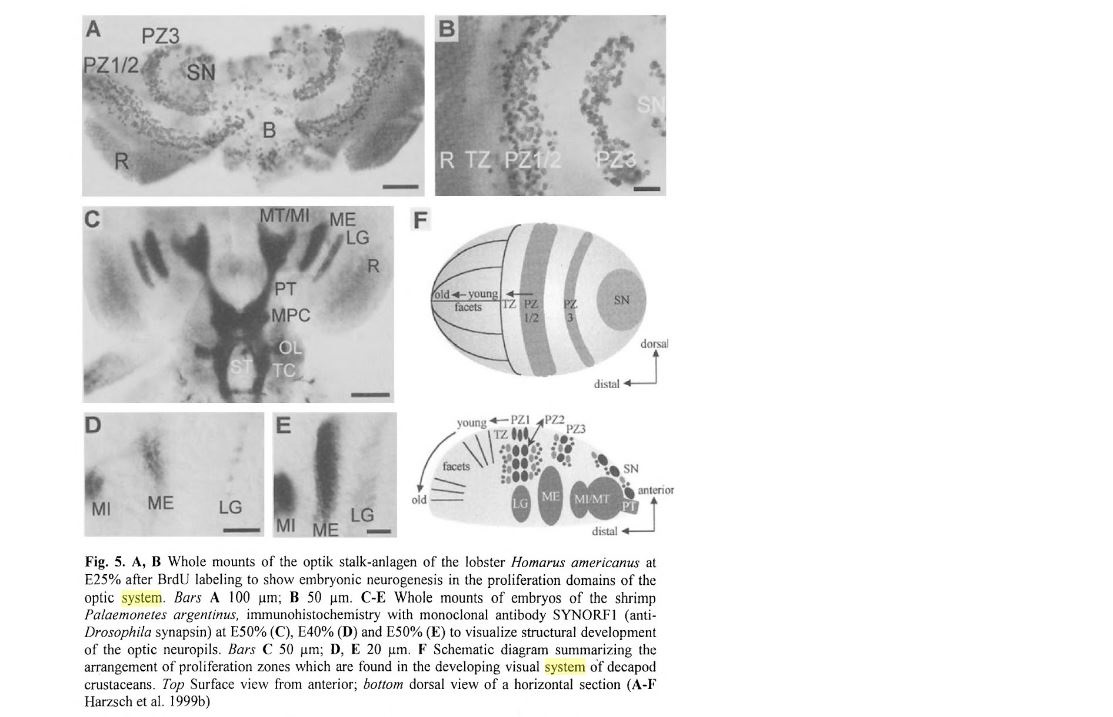 The same google book preview also shown the development of ladder like double-nerve-cord . 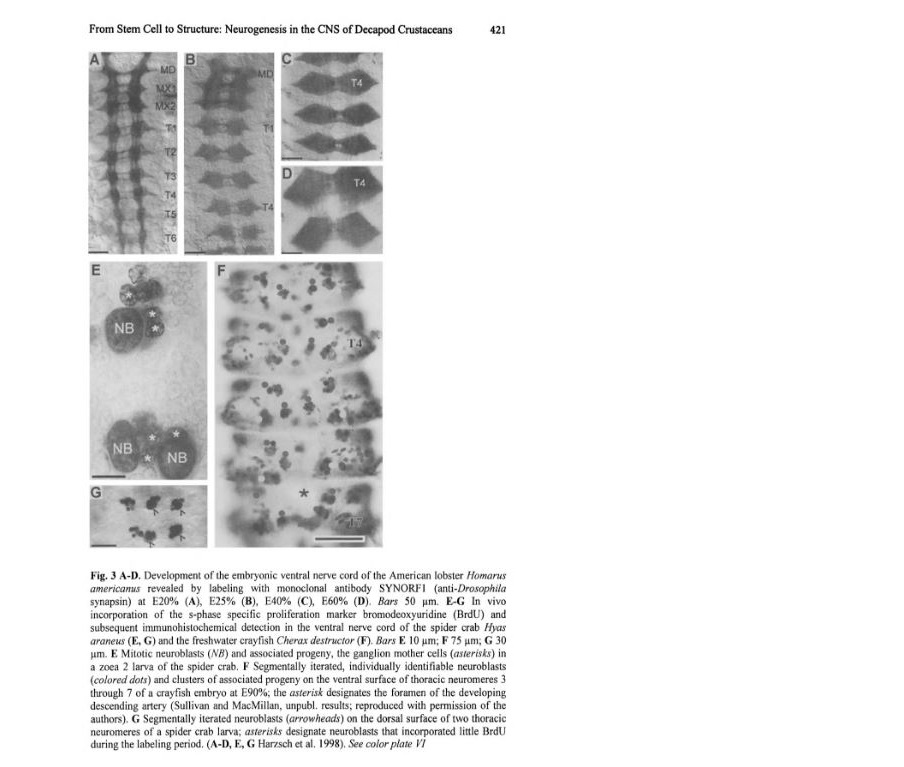 On the same Google book preview I found a more functional diagram (neuron response curves) of the crayfish, Procambarus 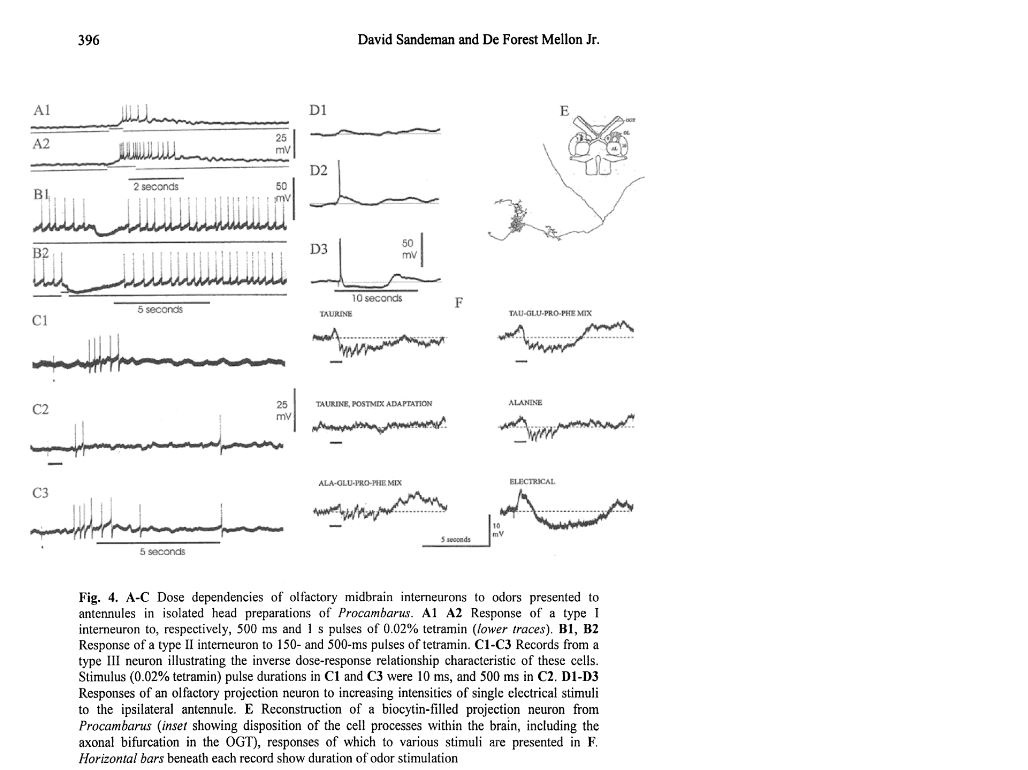 Lobsters have compound eyes, as do most arthropods, but these are stalked to provide a broader field of view and increased binocular spread. In clawed lobsters, each eye has 13,500 ommatidia which are light capturing, image forming organs. Lobster eyes are adapted for use in low-light environments, but appear to be only monochromatic (no true color discrimination ability). How good is their eyesight? How much do they rely on it, relative to other sensory systems like smell, taste, or touch? Lobsters, with their eyes perched on top of their heads, certainly detect shadows of potential predators looming above them - - whether that detection is perceived simply as quick changes in light intensity or whether an image is formed is not known. Lobsters also use some obvious visual displays in agonistic encounters. Still, chemical and tactile senses appear to be the keys to successful social encounters and prey detection. However, vision in lobsters has not been well studied.

Even though lobsters live in a watery world, they have highly developed systems of both smell and taste. The first antennae, properly known as antennules (little antennae), act as the "nose" of the lobster. Hundreds of fine hairs cover the antennules and are the actual organs of smell. These hairs are incredibly sensitive to amino acids, the building blocks of all proteins, of which animal tissue is made. However, the hairs are densely packed on the antennules and this proves to be a problem in a watery environment. Water is much more viscous (sticker) than air, as oils are more viscous than water. When fine structures are densely packed together and placed in a water environment, the water between these structures is not easily moved - - in other words, a boundary of nonmoving water is formed around the structure. In order for a lobster to be able to smell something, or to be able to walk towards a smell, it has to constantly sample the chemicals in the water to determine their changing concentration. Lobsters do this in the same way that humans do - - they sniff. Sniffing is accomplished by flicking the antennule downward quickly - - this removes the old water and replaces it with new water and a new odor sample. Flicking can be easily observed by watching a lobster in a tank (at an aquarium,restaurant, supermarket, or lobster pound) for just a few moments. Because lobsters have two antennules, they can determine the direction of the smell by comparing the difference in concentrations between the two antennules. Humans use a similar mechanism for distinguishing between different concentrations (noise levels) of the same signal to determine the direction of sounds.

Lobsters also possess proprioreceptors - - sensory hairs that are internal and provide information about limb movement, posture, and equilibrium. These are generally located at joints and within muscles and are stimulated when the joint is bent or straightened and when the muscles are stretched. Proprioreception is critical to maintaining proper posture and coordination during movements.

Lobsters are also capable of producing and detecting low-frequency sounds. Clawed lobsters produce a growl or rasplike sound by contracting a small sonic muscle in the base of the large antennae. These sounds are not made during social interactions, but have been recorded for lobsters resting in their shelters and can be felt (not heard) when a human pulls a lobster from its tank or natural habitat. Their purpose is completely unknown, but may have something to do with defense. In contrast, spiny lobsters possess a stridulatory organ at the base of the second antennae that makes a variety of sounds: rasps (during aggressive encounters or when predators are nearby), slow rattles/flutters (when secluded), pops (when the lobster is out of its shelter), and mating calls. They do not, however, possess the functional equivalent of ears and thus do not hear these sounds in the same fashion as we do. But sounds are simply vibrations that travel through the medium they are produced in (air or water) and thus, they can be detected by mechanoreceptors that are sensitive to water vibrations.

Though, however; this webpage did not display the references for their so detailed informations.

The above mentioned website, Wikipedia, and some other website mentioned about this dispute. Several of the website (including OP's mentioned) supported the view that lobsters/ crustaceans don't feel pain; some put a more-or-less neutral opinion (like wikipedia, Lobsters conservancy). Some website such as PETA strongly offended this view and clearly expressed it as a popular believe.

Some people believe that shrimps, crabs, and lobsters—all of whom are more closely related to insects than to vertebrate animals—cannot feel pain at all. But recent scientific studies have shown that crustaceans have central nervous systems very much capable of generating the sensation of pain. Crustaceans release stress hormones (analogous to our adrenal hormones) in response to painful events. If you’ve ever seen a lobster or crab lowered into a pot of boiling water, you’ve seen these animals fight just as hard for their lives as any other animal would in the same situation. A lobster can’t scream, but that doesn’t mean he doesn’t feel agony in the time it takes for him to boil to death. And crustaceans suffer in other ways—they are often transported alive to restaurants and grocery stores and crowded into tanks where they are so stressed that their claws must be banded shut to prevent them from attacking each other.

My opinion about this problem; is nothing but people might overthinking a certain belief, and the logical barrier to both prove or disprove it, is the problems of qualia.. And also, "lobsters don't have nervous system" is a drastic misinformation, a really bad news for science; But basically lobsters are no different from other animals.

Not the answer you're looking for? Browse other questions tagged pain central-nervous-system aquatic-biology or ask your own question.

9
Do ants feel pain?
8
What does pain look like in wave form?
2
At what stage is the nervous system developed enough to interpret neuronal signals as 'pain'?
2
Alcohol consumption and central nervous system
27
Do oysters feel pain?
1
Does the nature of nervous impulses give us a finite number of things we can perceive?
7
How can tooth enamel feel pain when drilled by a dentist?