Can you identify this insect for me?

Does anyone know what this is? I have lived in this area of northern Utah, USA for over 30 years and played with insects, snakes and spiders growing up here. However, until this week, I have never seen this insect before, nor anyone else we have asked. Suddenly they are all over our porch, patio, trampoline and house. This one is about the size of a lady bug, but we have seen some about double that size.

At first we thought it might be a beetle, but their shells are not bifurcated. Looking underneath, they have a long thin tube that they fold into their body that appears to be their mouths. We thought a weird tick, but they only have 6 legs. Can't seem to find anything similar online either.

Does anyone know, what it is? 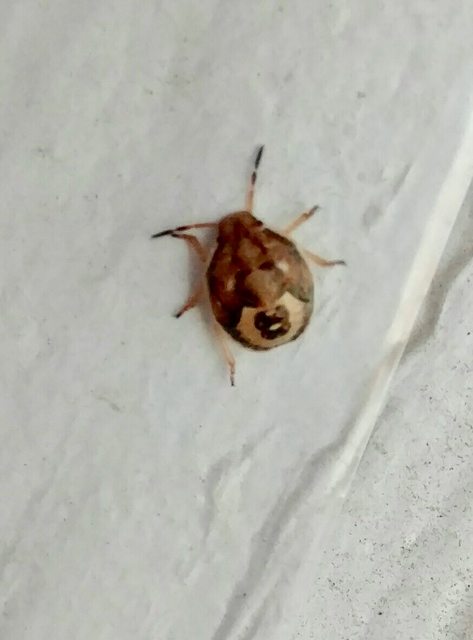 Definitely a nymph of some species of true bug (order Hemiptera), most likely in the suborder Heteroptera (i.e., the shield bugs, stink bugs, assassin bugs, etc.) and family Pentatomidae.

For example, see these photos of nymphs of similar species:

Using yet another species, Piezodorus lituratus, as an example, you can see how a Pentatomidae nymph typically develops to maturity: 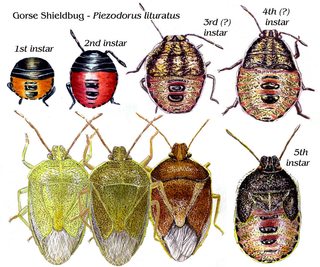 As to your species...

This site lists Cosmopepla lintneriana, Chinavia hilaris, Podisus placidus, Chlorochroa rossiana, and Sehirus cinctus as species of Pentatomidae that live in Utah. None of their nymphs looks quite right, though your specimen reminds me most of a stripe-less Podisus. That might be a good jumping off place for further digging...

I can't find a great match yet, but I can keep looking. I'll update if I find one.