What chemical conversions are involved , and what's the name for the process, when the muscles use lactate as an energy source?

I understand that muscles do anaerobic metabolism, specifically, "lactic acid fermentation", which I understand produces lactate. I'm not asking about that process.

What chemical conversions are involved , and what's the name for the process, when the muscles use lactate as an energy source?

I'm aware that it can happen as This paper, is tellingly and usefully titled, "Lactate as a fuel for mitochondrial respiration" (though I only have the abstract)

And aside from that paper i've also heard

"lactate produced during exercise can be reused as fuel by the muscles by turning it into glucose".

But I'm interested in what chemical conversions are involved

I see you've already got an answer in the comments, so this is rather a collection (with more proper formulation) of comments. As is known, lactate is produced by muscles (generally) during exercise due to absence of oxygen. However, the lactate produced can be used again in following two ways:

PS: there have been studies which now suggest that indeed lactate, not glucose, is the primary energy source of neurons. As per the lactate-shuttle hypothesis, the glial cells neighboruing neurons convert glucose into lactate, which is then used by the neurons. This fits with the observation that the extracellular fluid immediately surrounding the neurons is richer in lactate as compared with blood and cerebrospinal fluid, as shown in microdialysis studies. These studies suggest that glucose is not the actual primary energy source of neurons.

EDIT: As you see, the first reaction in both the cases is $\ce{lactate \rightarrow pyruvate}$. However, the main difference arises after this reaction. In muscle cells, this pyruvate is used in Krebs cycle, for which the first enzyme is pyruvate dehydrogenase converting pyruvate to acetyl-coA. However, in gluconeogenesis i.e. formation of new glucose molecule (a part of Cori's cycle), the first step is conversion of pyruvate to oxaloacetate, and is catalyzed by the enzyme pyruvate carboxylase. Thus, although the first step in both processes is the same, the end product is quite different.

Thanks David And Homosapien..

HomoSapien has posted an answer which i've accepted.

I have included here a useful diagram showing the conversion of Lactate to Pyruvate to AcetylCoA, and a description how it relates to the question.

As has been mentioned there are two different processes not to be confused. There's the Cori Cycle aka Lactic Acid Cycle, where which involves the liver, blood and muscle. Liver converting Lactate->Pyruvate->Glucose (that process in the liver is called Gluconeogenesis). Glucose travels to the muscle.. Muscle performs Glucose->Pyruvate->Lactate , lactate travels to the liver and in that cycle. so there Lactate is very indirectly fuelling an anaerobic metabolism in the muscle. Also note that(I understand from speaking to a biochemist), that when the Pyruvate is converted into Glucose it's technically not the reverse of Glycolysis since different enzymes are used and it's a different pathway. I see that the conversion of pyruvate to lactate is a reverse of lactic acid fermentation, as the same enzyme, LDH, is used

The other process, which is quite interesting and less spoken about in popular articles, is one which occurs entirely within the muscle. It's what David explained was Lactate -> Pyruvate -> AcetylCoA There is no conversion to Glucose there. And as Bryan has pointed out to me, The lactate metabolism they are talking about in that paper isn't really anything special - all of the reactions except lactate->pyruvate, are exactly the same reactions from standard glucose aerobic metabolism. That - Lactate->Pyruvate->Acetyl Coa is the one the paper is talking about. A main point to make there is that the Lactate->Pyruvate conversion is performed by the enzyme LDH which can work both ways, and in doing lactate->pyruvate, it is doing the reverse of "lactic acid fermentation". The other part, Pyruvate->AcetylCoA is what happens in aerobic metabolism.

I found a really good picture in that paper which helps explain things related to the answer of my question in regards to the process where muscle converts lactate to pyruvate as fuel for aerobic respiration... (I suppose it could potentially fuel anaerobic metabolism rather than aerobic)

So the picture shows the cell and the mitochondria within it. 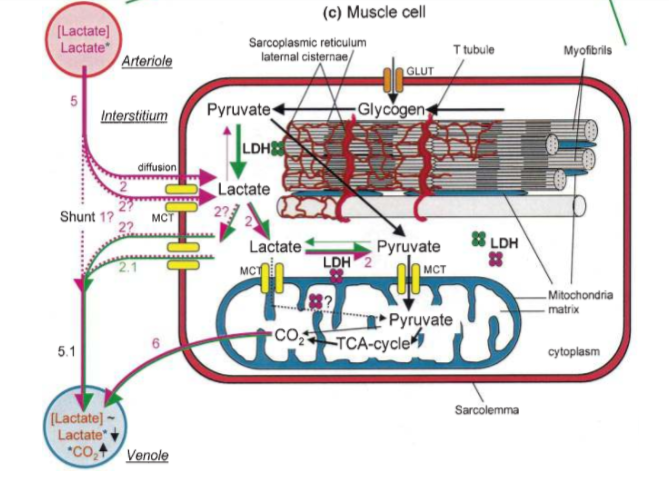 So when this page for example, (to quote what I know to be an accurate part of that article), says "lactate produced during exercise can be 'recycled' into glucose and used as fuel by the muscles" It's referring to the cori cycle, since it mentions lactate converting to glucose. Whereas in contrast, that paper, is talking about a process within purely within the muscle. Also the cori cycle is about pyruvate being used for anaerobic metabolism(anaerobic metabolism occurs in the cytoplasm) and the paper mentions about pyruvate being used for aerobic respiration(a reaction in the mitochondria).

Not the answer you're looking for? Browse other questions tagged biochemistry metabolism muscles fermentation or ask your own question.

6
Energy use by muscles, actual work done by muscles and more
1
What is the energy source for adipocytes?
4
Cellular Respiration/Fermentation Problem Leading to Lack of Energy
10
Are humans capable of both anaerobic respiration, and lactic acid fermentation?
3
Is glycolysis the beginning part of fermentation, or does fermentation follow glycolysis?
2
Does Glycolysis produce lactate, or pyruvate?
4
Glycolytic non-oxidative pathway