What is the function of multiple nuclei in syncytial cells?

A mononucleate's size is limited by its nucleocytoplasmic ratio, and protozoa like being big.

The solution? Multiple copies of the same genes in huge nuclei, or multiple individual nuclei.

Multiple nuclei are common in any large, complex cell. There is nothing specific to the presence of cilia that require multiple nuclei, and ciliates are not the only multinucleate protozoa (the amoeboid Chaos genus can contain up to a thousand). The reason large, complex cells require this is simply because they are so big. Such a huge size requires, in addition to more complex nuclear regulation, a high total protein turnover, which in turn requires a high transcription rate. Even with mRNA being translated by numerous ribosomes, the amplification factor is still limited. Having multiple nuclei increases the rate of mRNA production, which increases the total synthetic capacity of the organism. When only a specific gene is required to be transcribed at a high rate, that individual gene may be duplicated many times. This is often seen in the nucleolus, which contains many copies of the same genetic material required to create the huge amount rRNA needed for ribosome biosynthesis: 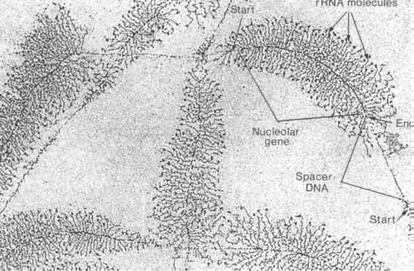 Many protozoa are large because they are packing as much complexity into a single cell as they can, even to the point of having a backbone-like structure or simple photosensitive "eyes" (though not all protozoa are large). Many adaptions are required to allow single-celled organisms to grow to this size, such as a more complex cytoskeleton, a dedicated feeding apparatus, a contractile vacuole, etc. Multiple copies of genetic material is just another required adaptation. This adaption can manifest itself in various ways. Some organisms have multiple copies of the same nucleus. Others fuse these nuclei into a single, large nucleus (a macronucleus), keeping a limited number of micronuclei around for sexual reproduction:

Multicellular organisms tend to have multiple nuclei in specific cells for the same reason. Many types of cells, for example, require an extremely high rate of protein turnover and are very large (such as skeletal muscles), so they have multiple nuclei. This occurs when a single nucleus is no longer sufficient, even at peak capacity.

I would like to point out that what you are describing is a coenocyte. A syncytium is a multinucleated cell which has arisen from the fusion of multiple cells and their constituent nuclei (karyogamy), whereas a coenocyte is a cell which had undergone multiple rounds of nuclear division, without accompanying cytokinesis.

Regarding your second question:

Multiple nuclei in a single "cell" is not exclusive to ciliated cells.

Muscle fibers of animals or placenta of mammals undergo cell fusion, resulting in multiple nuclei in one "cell".

Embryos of some animals start with nuclei division without cell division, also resulting (temporarily) in multiple nuclei in one "cell".

Other examples are provided here: https://en.wikipedia.org/wiki/Syncytium

Not the answer you're looking for? Browse other questions tagged cell-biology phylogenetics eukaryotic-cells cilia or ask your own question.

9
Multi-nucleated cells: advantages and examples?
3
How many centrioles/basal bodies are there in multi-ciliated cells throughout the cell cycle?
2
Dinuclei cellular mechanism
9
How can antibiotics damage the ear?
2
Why do some cells like myofibrils have multiple nuclei?
10
What is the difference between organelle membranes?
1
Why is the gene regulation in eukaryotic cells needs multiple level of control than in prokaryotic cells?
2
Do all human cells have all the same organelles?
2
What is going on with these buccal epithelial cells?
0
L-selectin in white blood cells