Do smaller intelligent animals have a higher neuron density to account for their seeming intelligence? Otherwise, what?

It seems like there's a lot of very small animals that have a much higher intelligence than what you would expect if you linearly projected intelligence as a function of brain size. There's ravens, crows and parrots which are much smaller than humans but have a recognizably high intelligence and emotional capacity. Then there's rats and general rodents like squirrels or similar animals like raccoons, and I guess an octopus to throw in which are good at problem solving and fierce fighters. Then there's also bugs like ants which are somehow very versatile and can adapt to many situations despite being that tiny, and with recent information may also have a recognizable emotional capacity like possibly bees.

It would make sense to me if the correlation between neuron density and intelligence isn't linear, but I don't have the information to make any determinations.

It also may be the case that we are implying intelligence in some cases.
The responses these animals show may have been evolutionarily selected as it best for their survival. However, to us the benefits of these responses may not be directly visible. For example, sheep herding dogs may have a high degree of spatial and numerical capabilities since humans bred them for these traits.

Implicit in the question is the assumption that the examples of the animals you mention somehow would outperform species (with brains) of similar size. Comparing intelligence between different species, no matter how you define it, is going to be challenging. I would argue that it is impossible to devise a single task with which to compare such different species as ants, octopi, crows, and rats. However some correlations between cognitive capacity and some anatomical features of the brain have been investigated.

The scaling of the ratio of total brain-to-body mass is not linear. It rather follows a power law relationship, typical to allometric scaling.

It is convenient to log-transform the mass variables in order to work on the following linear relationship:

The following plot from wikipedia displays this relationship for a number of different species. The slope of this line is $R$, and the intercept $log(\alpha)$. H. Jerrison proposed that the distance of a species from this line could provide an estimate of cognitive capacity. He called that measure encephalisation quotient. The reasoning behind this idea is that of course the brain of bigger animals will be bigger and that of small animals smaller, but is it bigger or smaller than expected from this simple universal model? If so, that may provide a clue for more advanced cognitive skills. 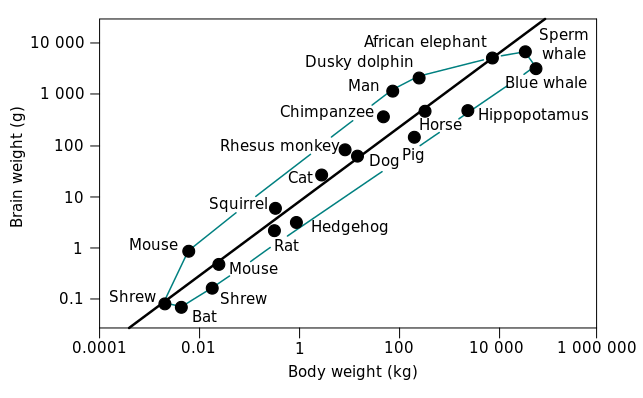 Indeed, we can see as examples that humans and dolphins diverge from this line quite distinctly, which matches with our intuition about these species' cognitive abilities, but so do some species of mice. Is this metric good enough to predict cognitive abilities overall? Given the primitive functions that many brain areas are associated with, such as the brainstem, it is not straightforward that a simple overall increase of brain size above what this simple model would predict, would confer any benefit to the overall cognitive capacity of an animal. At least when attempting to correlate cognitive capacity with several measures based on brain anatomy of non-human primates, it was found that overall (log)brain size or (log)neocortex size are better predictors than the encephalisation quotient. The proportion of brain volume that the neocortex occupies is also able to distinguish the brains of primates from those of insectivores or carnivores. Given the high-level functions that the neocortex is involved with, these results are not surprising.

Scaling of the whole brain or the neocortex can be due to a number of things. Either more cells are added, the cells become bigger, more glial cells are added etc. So which is it? According to a 2014 paper by the Kaas group more neurons are added in the cerebral cortex and the cerebellum. This results in a decrease in neuronal density in all species studied except primates, where neuronal density appears to remain relatively stable with the number of neurons. The authors conclude from this result that neuronal size (including axons and dendrites) must have remained stable in primates.

To answer your question, if we take overall brain size or neocortex size as a proxy for the cognitive capacity of an animal, we can conclude that the relationship indeed is not linear, as you predicted. However, we have no reason to believe that some species are exceptionally more endowed than what would be expected of them based on brain size given this non-linear relationship, except perhaps primates. Of course comparing mammals to invertebrates based on this evidence is a non-starter as they lack a centralised brain and/or neocortex.

Although we may be surprised by the remarkable things some species can do, this may only mean that we have not looked close enough at the capabilities of other yet unsuspected species. Conversely, our amazement may simply be because of the fact that we underestimate the capabilities of animals that are not similar to us.

Not the answer you're looking for? Browse other questions tagged neuroscience zoology brain or ask your own question.

15
Is there a correlation between total neurons and intelligence?
8
Is the ratio Brain Mass/Total Mass still considered a valid indicator of intelligence?
5
How are hereditary neural circuits created in the brain during early development?
6
Correlation brain size and muscle volume
2
Glia/Neuron ratio