Processing bodies (P-bodies) are distinct foci within the cytoplasm of the eukaryotic cell consisting of many enzymes involved in mRNA turnover (ref). They play a fundamental role in RNA silencing/interference, particularly as an antiviral response, since they are the key site for siRNA-bound RISCs (small interfering RNA-bound RNA-induced silencing complexes) to degrade mRNA with an exogenous origin. Some mRNAs entering P-bodies then leave and re-initiate translation, and the switching mechanism for this is currently poorly understood.

However, I'm not clear on whether all mRNAs pass through P-bodies at some point, when not actively involved in translation. Is there is a separate step by which mRNAs of exogenous origin are specifically (or more rapidly) recruited to P-bodies - and, if this happens, how are they specifically targeted for this uptake?

It seems rather odd if RNAi has evolved to give viruses two independent targets for evasion, but if the only requirement for recruitment to a P-body (and potentially degraded via RNAi) is to not be currently involved in translation, wouldn't that select for viral proteins to be more highly translated (and therefore postpone movement to the P-body)? I don't really understand why mRNA processing doesn't simply occur in the cytoplasm.

The paper cited above says "The available evidence indicates that P bodies are sites where mRNAs that are not being translated accumulate, the information carried by associated proteins and regulatory RNAs is integrated, and their fate — either translation, silencing or decay — is decided", but this is from 2007 and I'm aware RNAi is a very fast-moving field.

I don't really understand why mRNA processing doesn't simply occur in the cytoplasm.

To be clear, P-bodies are in the cytoplasm (ie they are not separated by a membrane). There is also dynamic exchange of components between the ribonucleoprotein complex and free cytoplasmic pool (1):

Most P-body components are distributed diffusely throughout the cytoplasm as well as being localized in P bodies. Quantitative information regarding the fractionation of these proteins between the cytoplasm and P bodies is still lacking, but given the volume of P bodies relative to that of the cytoplasm, the diffuse cytoplasmic fraction could be significantly larger, although the concentration of mRNA-decay factors might be much higher in P bodies. Also, P-body components dynamically exchange with the cytoplasmic pool, which indicates that decay enzymes and co-activators are not confined to P bodies. So, it is probable that mRNA decay also occurs, and might even be initiated, in the diffuse cytoplasm, and that P bodies arise by association of mRNA-decay intermediates induced by interactions between decay enzymes and cofactors. The concentration of mRNA-decay intermediates and mRNA-decay enzymes in P bodies would be expected to increase the speed of degradation and, in turn, reduce any potential competition between these RNA fragments and normal mRNAs for limiting cellular proteins involved in mRNA regulation.

I'm not clear on whether all mRNAs pass through P-bodies at some point, when not actively involved in translation.

mRNA can also be degraded by exosomes (1):

In eukaryotic cells, degradation of bulk mRNA occurs by two alternative pathways, both of which are preceded by removal of the poly(A) tail by deadenylases. Following this first rate-limiting step, mRNAs can undergo 3'→5' exonucleolytic decay, which is catalysed by the exosome... Alternatively, after deadenylation, the cap structure is removed by the decapping enzyme DCP2, rendering the mRNA susceptible to 5'→3' digestion by XRN1 [a P-body associated protein].

Also see (2), and this image therein: 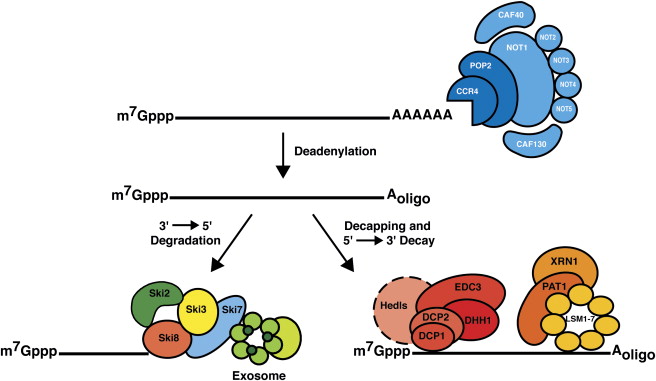 If the only requirement for recruitment to a P-body (and potentially degraded via RNAi) is to not be currently involved in translation, wouldn't that select for viral proteins to be more highly translated?

That is, in fact, not the requirement (3)

Recruitment of mRNA to PBs is not an occurrence of non-translation, rather requires active silencing via miRNA or RNAi mechanisms.

They reference another paper (4):

Recent studies with mammalian cells have shown that P-body integrity is not required for ARE-mediated mRNA decay or silencing mediated by fully or partially complementary exogenous, transfected small interfering RNAs (siRNAs). In this study, we investigated the requirement for P-body integrity in NMD, mRNA decay, and silencing mediated by miRNAs and long double-stranded RNAs (dsRNAs). We show that these pathways are unaffected in cells lacking detectable, wild-type P bodies. However, although P bodies are not required for silencing, active silencing pathways are required for P-body formation in Drosophila melanogaster cells, indicating that P bodies are not the cause but a consequence of silencing.

Is there is a separate step by which mRNAs of exogenous origin are specifically (or more rapidly) recruited to P-bodies - and, if this happens, how are they specifically targeted for this uptake?

The RISC complex can be involved in initial recognition and cleavage of viral RNA and the resulting fragments are subsequently degraded by the exosome or P-body associated proteins. RNAi associated components have been observed to be localised with P-bodies (1): 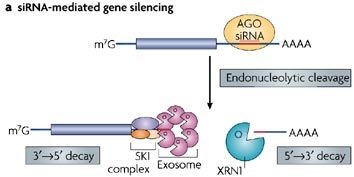 You can also consider the R-gene viral defence mechanism in plants which induces P-body formation and suppression of translation in an RNAi independent manner (5):

Plant NB-LRR proteins [R-genes] confer resistance to multiple pathogens, including viruses. Although the recognition of viruses by NB-LRR proteins is highly specific, previous studies have suggested that NB-LRR activation results in a response that targets all viruses in the infected cell... NB-LRR signaling does not result in the degradation of viral transcripts, but rather prevents them from associating with ribosomes and translating their genetic material. This indicates that defense against viruses involves the repression of viral RNA translation... As a consequence..., NB-LRR responses induce a dramatic increase in the biogenesis of RNA processing bodies (PBs). We demonstrate that other pathways that induce translational repression, such as UV irradiation and RNAi, also induce PBs. However, by investigating the phosphorylation status of eIF2α and by using suppressors of RNAi we show that the mechanisms leading to PB induction by NB-LRR signaling are different from these stimuli, thus defining a distinct type of translational control and anti-viral mechanism in plants.

There are many articles discussing how viruses subvert and/or repurpose P-body mediated decay if you want some further reading (3), (6), (7).

Not the answer you're looking for? Browse other questions tagged virology mrna microrna rna-interference or ask your own question.

3
Why introduction of an extra copy of a gene related to pigmentation causes RNA interference in Petunia?
10
Are non-coding RNAs introns?
1
Transposons, Viruses and RNA interference
1
Secondary structure and function in mRNA and single-stranded virus RNA
3
Are RNA cleavage sites always polyadenylated?
1
What prevents mRNAs that are localized to a specific part of the cell from being translated before they reach their destination?
5
Is viral single-stranded RNA in the absence of reverse transcriptase infectious?