Do different chiral centers on ligands cause different confirmational changes and effects in their target proteins?

Say pathogenic bacteriaA makes toxinA, which had D-amino acids instead of L-amino aids, does this difference in chirality cause a different conformational change in the receptor or enzyme, thus leading to either deactivation of the enzyme or signal transduction pathway or activation of a different pathway?

I understand what chirality is in the concept of organic chemistry — rotating plane polarized light, ingold-prelog system etc; however I never leaned what structural feature of chiral molecules changes the way they react inside a cell.

I do NOT understand HOW changes in chirality can be associated with cellular toxicity.

There a few things you have to take care of with chirality in biological systems:

First note, that for amino acids we usually use L and D instead of r and s nomencalture.

In chemistry the difference between chiral enantionemeres is usually really just a difference in light polarisation like you described, otherwise they can be thought of as identical, since they have identical chemical properties. This way of thinking does not apply to biochemistry - the moment enzymes (large molecules with very defined 3D structures) are involved the structural difference between the two forms becomes very important for each and every biological reaction.

In the case of single amino acids this means that D amino acids are toxic to eukaryotic cells, because their similarity to the D form allows them to interact with some of the enzymes that usually bind it, but the binding is not a perfect match so the enzymes get inhibited, which makes the D form toxic. (This is already described in the second paper you linked:)

In animal studies, administration of D-amino acids to rats and chicks resulted in growth inhibition [18]. In addition, serious damages such as suppression of the synthesis of glutamate oxaloacetate transaminase, glutamic pyruvic transaminase, and lactate dehydrogenase resulted from D-amino acids accumulation in animal tissues [18].

Now in your question you are asking about the difference between a toxin made from the 'wrong' amino acid. The thing is, this change of the protein will most likely mean, that its not a toxin anymore. A protein toxin is toxic because it can interact with other proteins, based on its 3D structure. This structure is based on the chemical and structural properties of the amino acids building it. If you change the underlying structure of every amino acid it will fold differently and you will get completely different protein - and not a mirrored version of the original protein/toxin.

One can make no generalization about the effect of the change in chirality in a ligand in the protein to which it normally binds. As the simple diagram below shows, as far as interaction with the ligand binding site is concerned there is no essential difference between a enantiomer of the normal ligand and a modified version of it:

Both may be able to interact with sites ‘a’ and ‘b’ on the protein, but whether this will be inhibitory or not cannot be predicted — it will depend on the energy of the interaction compared with that of the correct interaction (and the relative concentrations of substrate and inhibitor).

If it does bind it is most unlikely to cause a conformation change, and even less likely to trigger an alternative pathway. Most protein binding sites are tailored for a single response. In the event of disruption, inhibition is the most likely result.

As far as a bacterial toxin is concerned, the fact that it may employ D-amino acids is a red-herring. The overall structure of the toxin is what counts, and has evolved to act on a specific target. Each example is likely to be unique.

Any textbook of biochemistry will have sections on the substrate specificity of enzymes (e.g. Berg et al. online).

As Nicolai has mentioned in his answer, change of chirality (L and D) of amino acids will drastically change the way a protein folds. I searched online to find if a solved structure of D only form of any protein. However, there were none.
But, both right handed and left handed DNA are known. This difference does not happen because of the chirality difference of the DNA constituents but the way the bases are base paired. However, it exemplifies how the change in chirality can lead to non-trivial change in structure. 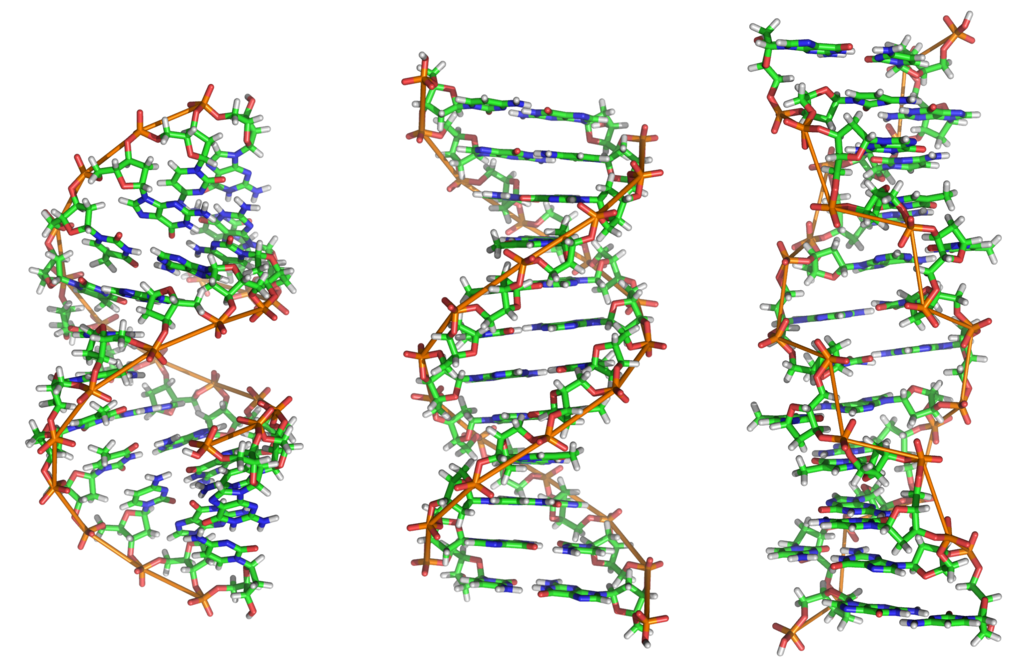 Original uploader was Richard Wheeler (Zephyris) at en.wikipedia - Originally from en.wikipedia; description page is/was here., GFDL, https://commons.wikimedia.org/w/index.php?curid=2117121
I will read some more on signal transduction and return to the question.

Not the answer you're looking for? Browse other questions tagged cell-biology enzymes amino-acids protein-binding chirality or ask your own question.

8
Is consuming proteins different vs. consuming amino-acids and how?
2
Does urea at different concentrations (5 or 0.5M) have different effects on proteins?
6
How do membrane proteins find their target locations?