How does hypochlorous acid inactivate viruses?

I was reading how bleach was used very widely as a disinfecting agent during the 2014 West Africa ebola outbreak and am interested in the mechanisms with which hypochlorous acid inactivates viruses. Most of the studies I could find only focused on its activity against bacteria. I know viruses tend to be much more difficult to inactivate than cells as they're somewhat simpler and aren't really alive.

The other answer by @CMosychuk talks about the general aspect related to use of hypochlorous acid. I will discuss here its molecular mechanism of action.

Hypochlorous acid (HOCl) is a very powerful oxidizing agent. In aqueous solution, it dissociates into H+ and OCl- as:

However, HOCl also destroys viruses by chlorination. It acts on anything, from lipids to nucleic acids. For example, Hawkins et al ,2002 describe in detail the effects of HOCl on nucleic acids. HOCl, by direct chlorination, leads to the formation of chloramines, and ultimately nitrogen-centered radicals. These radicals often react with each other to form dimers. Also, they have reported formation of single- as well as double-stranded breaks on application of HOCl on plasmid DNA. See this image: 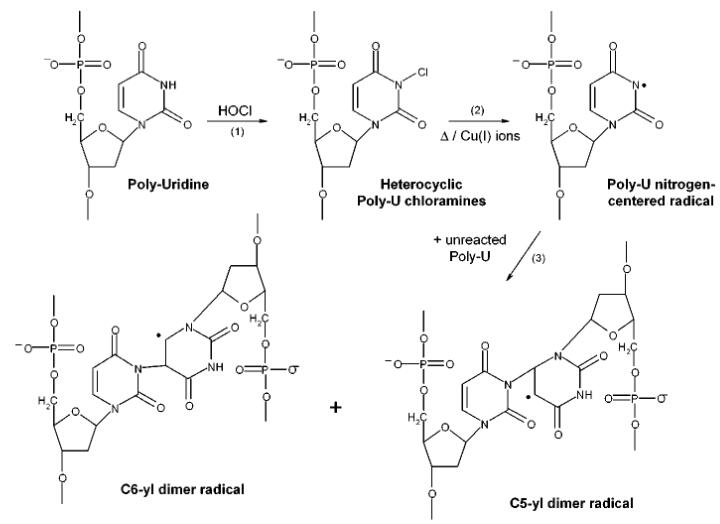 These reactions render the nucleic acid useless and the virus harmless. In a similar manner, HOCl also reacts with polypeptides, ultimately leading to their fragmentation. See these images (from here):

Also, as mentioned in the other answer, application of HOCl has been shown to promote denaturation and aggregation of proteins. The linked paper also talks about HOCl's effects on other biomolecules, such as carbohydrates, but those effects would be out of scope here.

A 2008 paper in Cell elucidated a mechanism not far off from how heat-denatured proteins in a cooked egg aggregate, and never return to their native conformation (1).

Remember that proteins don't do their job outside of their native conformation. The hypochlorous acid post-translationally modifies the proteins in a way that they lose their shape and begin to aggregate. The authors believe that the reactions are sufficiently fast that the denatured product builds up faster than the refolding reaction can take place. Your innate immune cells do something similar to combat microbes or cells they recognize as distressed or foreign, known as oxidative burst, by releasing compounds such as hypochlorous acid.

Now, viruses are just protein coats and nucleic acid. Sometimes they have an envelope, but the envelope is typically quite easy to destroy with detergent. Naked viruses are known to be able to survive a number of days in harsh conditions. The virus depends on elements of the protein coat such as spikes to attach and facilitate entry into the host. Denaturing agents will act to destroy these structures, preventing infection.

So what are some important considerations?

1) Concentration: At an inappropiate concentration, common disinfectants will fail because they lose efficacy. For example, alcohols at least 65-70% abv are known to be the lowest efficacious concentration, and anything lower you see the killing begin to drop off. People tend to use bleach at 10% or 100ppm I believe.

2) Contact time: Proteins take time to denature and immediately cleaning away the bleach will not accomplish your goal. Five to ten minutes wet contact time is appropriate for bleach. If it dries it loses effectiveness. Anything higher you don't see an increase in effect, either.

3) Compound: Bleach isnt good for everything. It works on hard, non-porous surfaces, but it also requires pre-cleaning because without a detergent, bleach won't remove grime or films that may inhibit its action.

Not the answer you're looking for? Browse other questions tagged biochemistry proteins virology or ask your own question.

32
How did viruses come to be?
5
How does protein denaturation work?
4
Amino acid compatibility
3
How does reversibility of lactic acid fermentation work?
1
Does all the citrus fruit contain Citric acid and Ascorbic acid?
3
How are viruses isolated?
2
Does digestion require hydrochloric acid?
10
How exactly does alcohol solution kill or neutralize viruses?
29
Killing enveloped viruses with soap