Our eyes only have the ability to sense light within a certain spectrum. My understanding is that particular frequencies energize specific cells in our eyes, each responsible for a different "color". When these cells are energized, they each release an appropriate amount of their chemical transmitter to stimulate additional cells and create the perception of the object from which the photos originate.

At what point does this process not occur for non-visible light?

In other words, do we fail to see non visible light because our eyes lack the receptors for other frequencies, or does our brain receive signals that it just dumps because it has not developed to process the information?

Have there been any experiments done involving a brain scan while exposed to non visible light?

Vision is based on a protein interaction with a molecule called retinal from vitamin A.

Wavelengths of light in the visual range cause a photoisomerization of retinal (a cis- to trans- change), which is sensed by the protein that is "holding on" to the retinal.

Wavelengths that do not cause this photoisomerization cannot be sensed by the photoreceptors of the retina, so there isn't any signal produced to transmit to the brain.

However, there is some filtering done by the lens of the eye. Without the lens, humans (and other animals) can see further into the UV range. That UV light is also damaging to the retina, though, so it's best to keep the lens intact.

Note that the image in the answer by @Remi.b is actually from a psychometric experiment, so the lens is intact. The responses there are actually human perceptual sensitivity to light for each cone. The blue curve would go off to the left quite a bit further into the 300nm range if the lens were not present. The research subjects probably prefer the experiment as-is, however.

You wouldn't perceive that UV light much differently than a far violet color, however, because differences between different cones are necessary for color vision, and by that end of the spectrum only the cones responsive to the shortest wavelengths are responsive at all.

[D]o we fail to see non visible light because our eyes lack the receptors for other frequencies, or does our brain receive signals that it just dumps because it has not developed to process the information?

It is because our eyes lack the receptors for other frequencies. 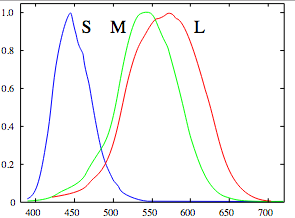 As you can see, we do not have receptors for wavelength below 390 nm or above 700 nm which is our visible spectrum.

Not the answer you're looking for? Browse other questions tagged brain vision eyes human-eye light or ask your own question.

5
What is the focus distance of a 3D screen?
12
Can "red" cone cells actually see much red light?
2
Seeing new colours with new photoreceptors
25
Why does my room suddenly look 'reddish'? My eyes seem to adapt to color
1
Does the nature of nervous impulses give us a finite number of things we can perceive?