How do our eyes detect light at different frequencies?

Here is my confusion: we can see colored light of different wavelengths: form red to violet. To my understanding, these stimuli cause a confirmational change in the photoreceptors in our eyes and results in a STP that eventually leads to an "all or nothing" action potential that sends another signal, again an all or nothing action potential through the optic chiasm to the occipital lobe and we perceive the colors as we see them.

My question is *how does this signaling work? *; How can a minor stimulus, resulting in an "all or nothing" chain of action potentials be converted into something as specific as the vision of color?

Asked another way, how does variation in a confirmational change at a receptor that results in "all or nothing" signaling lead to specific signals being sent such as colored vision ?

Short answer
Action potentials generated to different colors are indeed similar throughout the nervous system and do not encode color as such. Instead, the different color- sensitive cells in the retina are connected to different neurons and these color-specific signals are kept segregated up until the higher visual cortical areas.

Background
Action potentials are indeed pretty similar throughout the nervous system. However, the color-sensitive sensory cells in the retina, called the cones, come in three flavors: red, green and blue. These colors form the RGB system just like in your LED TV and can together make all the available millions of colors. These three cones synapse ultimately onto color-specific secondary sensory neurons (Fig. 1).

Hence, R, G and B cones indeed generate identical action potentials in downstream neurons, the trick is they do so in different retinal ganglion cells, and at different firing rates depending on the intensity of light that particular cone is sensitive to. These different classes of retinal ganglion cells project onto different classes of neurons in the brainstem (lateral geniculate nucleus, or LGN) and ultimately onto different neurons in the higher cortical visual areas in the brain. 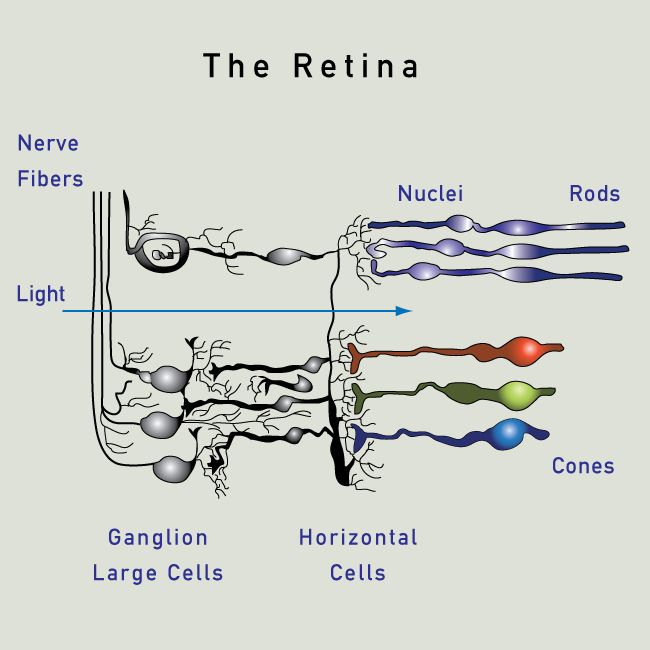 The reason why we can differentiate millions of colors can be explained by the Hering model of color vision (Fig. 2). Basically, the different cones converge pairwise onto opponent color-sensitive cells. The red-green opponent system, for example, operates by weighing the amount of red and green in the incoming signal. This weighting results in an analogue system that can code millions of colors along the red-green axis (Fig. 3). 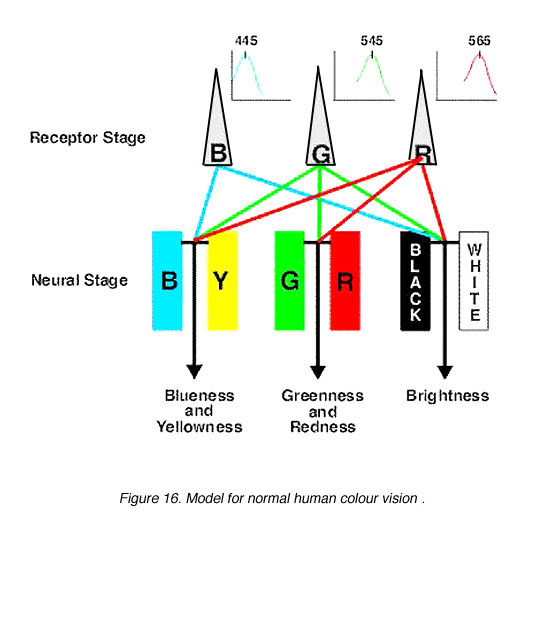 How can a minor stimulus, resulting in an "all or nothing" chain of action potentials be converted into something as specific as the vision of color?

Visual phototransduction is the one of answers to your question.

It is a process by which light is converted into electrical signals in the rod cells, cone cellsand photosensitive ganglion cells of the retinaof the eye. This cycle was elucidated by George Wald (1906-1997) for which he received the Nobel Prize in 1967. It is so called "Wald's Visual Cycle" after him.

The visual cycle is the biological conversion of a photon into an electrical signal in the retina. This process occurs via G-protein coupled receptors called opsins which contain the chromophore 11-cis retinal. 11-cis retinal is covalently linked to the opsin. When struck by a photon, 11-cis retinal undergoes photoisomerization to all-trans retinal which changes the conformation of the opsin leading to signal transduction cascades which causes closure of cyclic GMP-gated cation channel, and hyperpolarization of the photoreceptor cell.

In dark glutamate is continually being secreted at synapse between photoreceptors and bipolar cells. 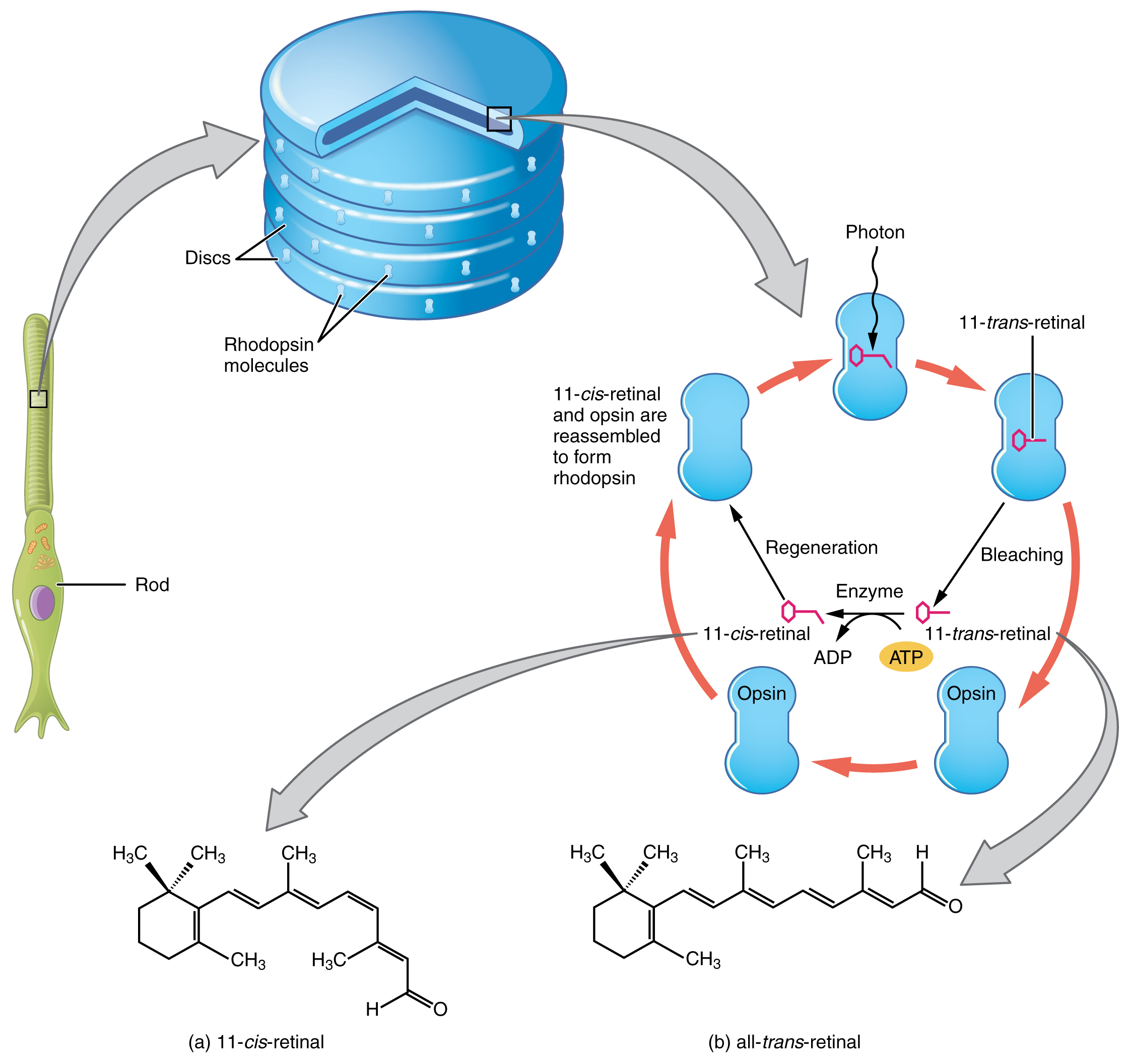 1)A light photon interacts with the retinal in a photoreceptor cell. The retinal undergoes isomerisation, changing from the 11-cis to all-trans configuration.

2) Retinal no longer fits into the opsin binding site.

6) The alpha subunit-GTP complex activates phosphodiesterase or PDE.PDE breaks down cGMP to 5'-GMP.

7)This lowers the concentration of cGMP and therefore the sodium channels close.

8) Closure of the sodium channels causes hyperpolarization of the cell due to the ongoing efflux of potassium ions.

9)Hyperpolarization of the cell causes voltage-gated calcium channels to close.As the calcium level in the photoreceptor cell drops, the amount of the neurotransmitter glutamate that is released by the cell also drops.

Impulse conduction As is explained by AliceD above via CN 2 using labelled line principle.

How do our eyes detect light at different frequencies?

Different frequencies are recepted via different photoreceptors i.e. different pigments in cones. Tricolor mechanism being the most famous. Here, our eyes can detect three different colours Red, Green and Blue. These are mixed in appropriately for detection of different colours. 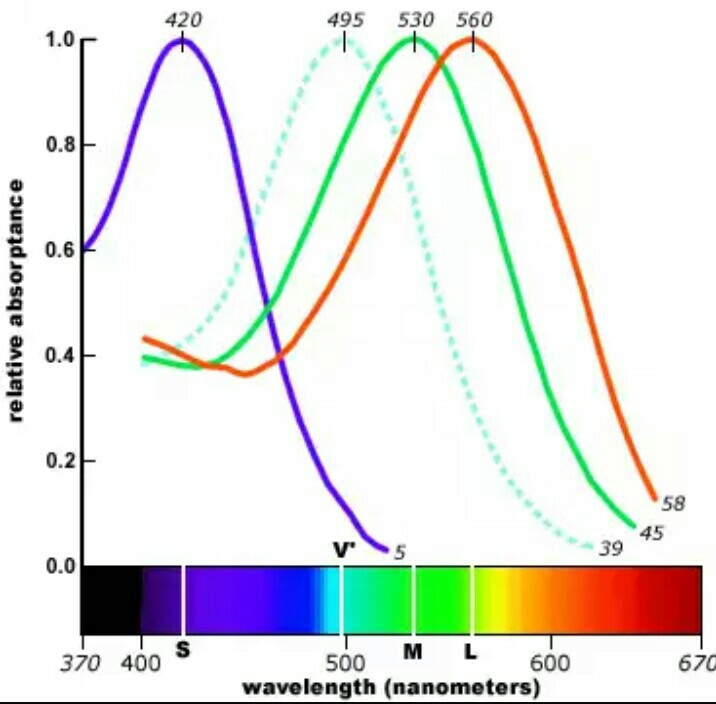 Not the answer you're looking for? Browse other questions tagged neuroscience neurophysiology eyes senses central-nervous-system or ask your own question.

3
How do photoreceptors overcome the ambiguity of wavelength vs intensity to determine brightness?
3
Photoreceptors and light with mixed frequencies
0
What is the neural coding of rod and cone cells?

14
How do we know the presence of light when our eyes are closed?
9
Why does my eyes see a red spot when over exposed to light?
3
Photoreceptors and light with mixed frequencies
8
What is the smallest difference in light wavelength that the human eye can detect?
6
What would happen if you "rewired" your eyes with your nose?
8
Are there animal species that sense infrared light with their eyes?
1
If action potential is "all or nothing" then how are finely tuned signals sent from one neuron to another?
1
Does the nature of nervous impulses give us a finite number of things we can perceive?