Which cells produce HCl produced in stomach? Don't these cells get destroyed by HCl?

Which cells produce HCl produced in the stomach? Or is HCl produced due to the translation of proteins. Don't these cells get destroyed by HCl?

Since your first question is a quite basic one (the answer is oxyntic cells) and asking two or more questions in the same post is a reason to close ("Avoid asking multiple distinct questions at once"), I'll address only your second question:

[Why] don't these [oxyntic] cells get destroyed by HCl?

First, it's important to understand that oxyntic cells (from the greek ὀξύς, meaning "sharp" or "acid") do not produce HCl. They actually secrete two separate ions, Cl− and H+ (and, since HCL is a strong acid, one can say that technically there is — almost — no HCL in the lumen, because the ions keep dissociated).

You can find this in any physiology book, but there is a good explanation of the steps in Scientific American (2017):

This image from Lodish (2000) summarises it very well: 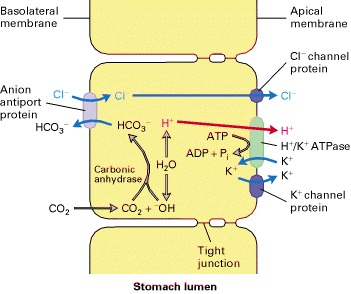 Second, why don't the HCl (actually Cl− and H+, as explained above) already present in the lumen destroy the mucosa? The answer is the mucus layer.

HCl in the lumen doesn't digest the mucosa because goblet cells in the mucosa secrete large quantities of protective mucus that line the mucosal surface. Basic electrolytes, such as HCO3−, trapped inside the layer of mucus neutralize any HCl that penetrates the mucus.

By the way, a similar mechanism explains why doesn't the lysosome has its membrane destroyed by the enzymes it contains.

Not the answer you're looking for? Browse other questions tagged cell-biology digestive-system stomach or ask your own question.

3
Where are -HCl supplements absorbed in the human digestive system?
2
Transplantation of stem cells
6
Do we consume DNA and proteins of other organisms?
4
Betaine HCl stomach pH
8
Why some cells don't produce purines?
11
Do humans produce rennin?
2
Does digestion require hydrochloric acid?
6
Spike protein production by mRNA vaccines?