Are we capable to generate sounds of animals to the point that they mistakenly recognize it as members of their species?

From Animal language (Wikipedia), there are many evidences that we can communicate with animals, at least to baboons and dolphins. There is a case that fish moving away when hearing a record of whale sounds, however no examples mentions about the sound we actually make to communicate with them. We can even dog whistle, but this doesn't mean the dogs thinks that there is another dog. In my opinion, the answer is yes, since once we can capture the sound with spectrograms we can ultimately generate it. Is there any research on this?

The most clear and indisputable case of a human being generating a sound (using his own voice) that was mistakenly recognised by an animal as a sound made by a member of its own species is the case of Konrad Lorenz and the imprinting on birds. 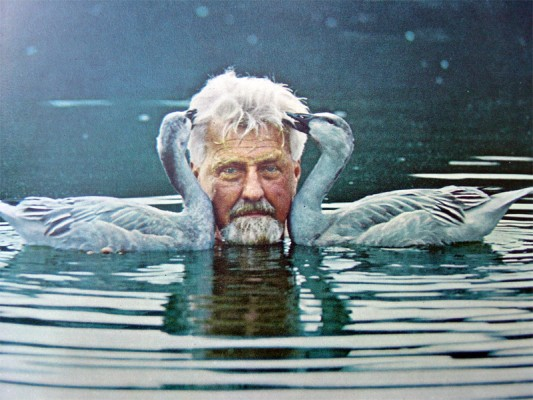 Lorenz needs no introduction. However, in the case you don't know him, he is the father of modern ethology, together with Niko Tinbergen.

Among several other things, Lorenz studied and explained imprinting, specifically filial imprinting. According the Wikipedia link above:

Lorenz demonstrated how incubator-hatched geese would imprint on the first suitable moving stimulus they saw within what he called a "critical period" between 13–16 hours shortly after hatching. For example, the goslings would imprint on Lorenz himself (to be more specific, on his wading boots), and he is often depicted being followed by a gaggle of geese who had imprinted on him.

For imprinting in an object (the mother), some species depend on movement that object makes, some depend on the sound it makes and some depend on a mix of movement and sound. From Brittanica:

Lorenz demonstrated the phenomenon by appearing before newly hatched mallard ducklings and imitating a mother duck's quacking sounds, upon which the young birds regarded him as their mother and followed him accordingly. (emphasis mine)

During his life, Lorenz had several bird children, making several different youglings imprinting on him. As you can see in pictures like this one below, those animals will follow Lorenz (for the rest of their lives) as if Lorenz were their mother. 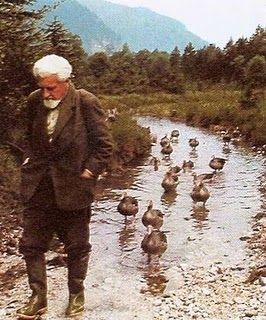 The funny thing is that, during some time after his early publications (but way before his Nobel Prize in 1973), some people had problems accepting Lorenz's discoveries, because they could not reproduce them.

It turned out that Lorenz was very effective in imprinting a lot of different bird species because of his uncanny ability of mimicking that bird species' sound, be it a goose, a chicken or a duck.

Of course, raising so many children has its problems: 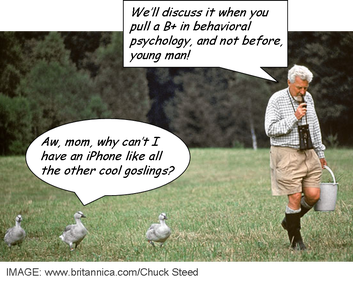 Not the answer you're looking for? Browse other questions tagged zoology ethology behaviour communication language or ask your own question.

8
Why social animals attack odd members of their own group?
19
Are there any animals that celebrate communally?
5
Can birds raise younglings that are not their own?
2
Are there any animal species other than humans & chimps that engage in tribal conflicts?
3
Why are Aardvarks capable of burrowing given their size?