What happens to the human ear as it naturally goes deaf?

I was always told that when the human ear goes deaf to a specific sound (auditory frequency), then that sound is heard one last time, and upon fading away, will never be able to be heard again.

Is this in fact true? If so, why do we hear that sound (which seems to happen randomly and is somewhat loud for a split second) just before the ear becomes deaf to it?

I don't think you will hear the frequency "one last time", before it fades away. More likely you will slowly lose your range of hearing from high to low frequency.

Hair cells in the cochlea are arranged in a spiral on the basilar membrane, with high frequency cells at the apex. For some reason, high frequency cells are more sensitive to damage, either by loud noises, drugs (including certain antibiotics that cause deafness), or old age. By adulthood, humans have already lost a significant portion of their high-frequency hearing (children hear up to 22kHz, adults 16-18kHz from memory).

Significant hearing loss can also be caused by the loss of outer hair cells, which act as a cochlea amplifier, or loss of the type I spiral ganglion neurons that connect the hair cells to the brain. But typically age-related hearing loss is normally caused by the death of Inner Hair Cells.

Hearing loss is caused by different things, but your probably thinking of age-related hearing loss.

When people go deaf, it is be because "hair cells" in the ear break.

This breakage results from overly loud frequencies, or just random damage to cells over a lifetime.

If your last remaining hair cell that is tuned to a certain frequency after all the other ones have died gets killed somehow, it will depolarize and send an action potential to your brain telling it to hear that sound.

But that would be a very faint sound, since only one or a couple hair cells die off.

But in reality, it usually isn't that you hear a sound for the last time before going deaf, you have a faulty premise hear!

it's NOT like the ubiquitous "seeing the light" that happens when your heart stops.

NIDCD has a wonderful description of hearing, and how it's lost here.

Sorry I'm late on this, meant to have it up for your bounty, but ended up with a busy weekend. The short answer to your question is no, you don't normally hear or notice anything as you lose your hearing.

However, what you’re describing can occasionally occur in noise-induced hearing loss by acoustic trauma, which is not all that common (though not rare). Though it isn't normally tightly banded around lost frequencies, just a general "ringing" that contains some of the damaged/lost frequencies.

First, let's cover how hearing actually works, and then we'll see how it can break down. I'm going to stick with Air Conduction hearing for the sake of simplicity. To get everyone on the same page visually, here's a good open source diagram of the ear: 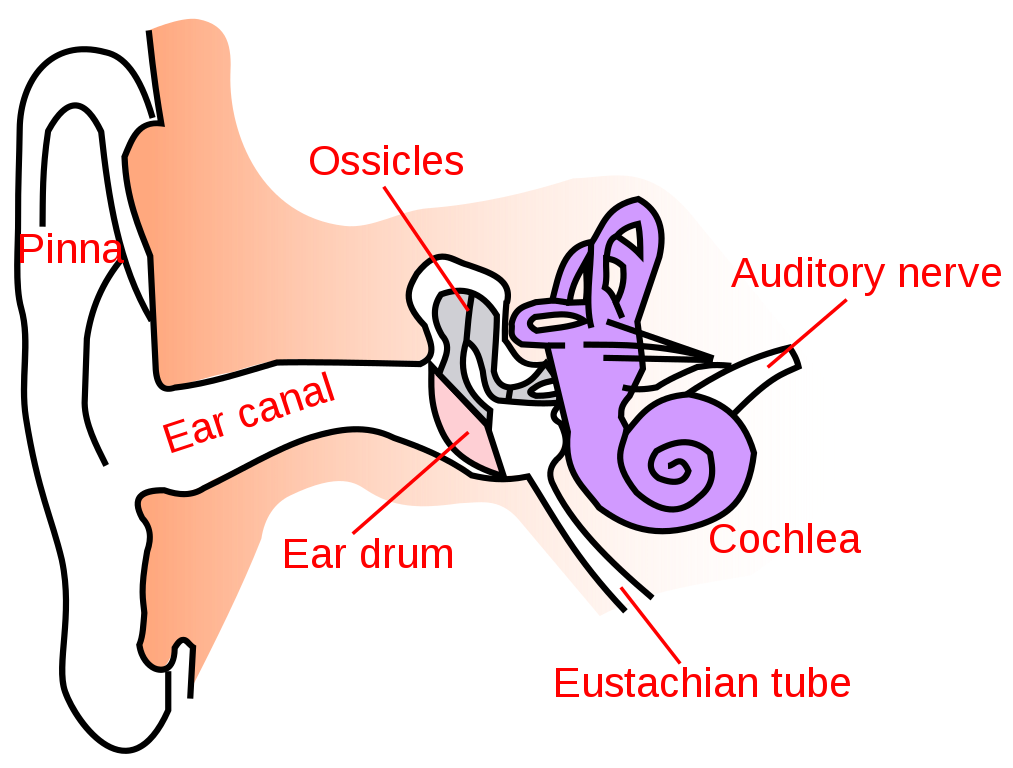 Generally, I think most people can understand that sound waves are captured and deflected by the "ear" (pinna and auricle) and then transverses ear canal (external acoustic meatus) where they finally hit the eardrum (tympanic membrane). The ear drum marks the division between the external ear to the middle ear.

The eardrum vibrates, not entirely unlike a drum, with the sound waves causing the little bones in your ear (ossicles) to vibrate. The signal is amplified and passed on to one of the best named body parts, the bony labyrinth (via the oval window). At this point the fluid (perilymph) in the inner ear moves about in different currents depending on the mix of wavelengths at the time (which can be described in detail, but is beyond the scope of this answer).

The main tissue that actually detects the movement of the fluid is the organ of Corti (you might think don't you mean cochlea, but note that this is the portion of the cochlea that actually process the movement of the perilymph). Hair cells react to waves in the perilymph differently depending on their placement and the wave itself. As the hair cells go up and down with the wave, the stereocilia on their surface get bent up/crushed/deflected against tectorail membrane. The hair cells with bent stereocilia then open up ion channels (though they don't have an actual action potential), which leads to action potentials in the nerve cells of the spiral ganglion.

Those nerves send signals to the inferior colliculi where the signal is "bundled and filtered," and finally sent to the primary auditory cortex where the brain will finally process the signal as auditory information. I realize there are plenty of intermediate structures I didn't mention, but I believe this gives an overview appropriate for the question.

Viewed simply, hearing loss occurs when any part of the complicated system above has a problem. The most common kind of hearing loss is sensorineural (SNHL), which is most commonly induced by noise (NIHL), but could also be do to degradation from aging, etc.

To get to a ringing effect, we need to consider the physiology of acoustic trauma. Often the energy wave is great enough that much of the proper Air Conduction pathway is skipped. Either way, the hair cells get slammed against either of the surrounding membranes. As you can imagine, under normal volumes the stereocilia become deflected (bent down), and then return upright as the sound wave passes. However, in acoustic trauma you hit the cells hard enough that it tears the cell membrane and lets ions leak en mass onto the nerve cells (1). If the damage is bad enough, or frequent enough, this will lead to an interesting effect called excitotoxicity (a cell stimulated to death). This in turn will be perceived, at least at the moment, as "ringing" in the frequencies covered by the neurons. In general, the damage tends to be broad enough that it isn't held to one particular wavelength or tone, and that the nerves become overwhelmed so a clear signal can't be distinguished (ibid).

Now your body will try to repair this, which will lead to swelling, repair mechanisms, and eventually scar tissue. This in of itself can interfere with proper hearing. If you're lucky, you'll be able to recover some of the hearing at the damaged frequencies, if not then you've lost the hearing in that range, and the last thing you heard there was ringing.