It reports an extensive analysis of a group of kitchen sponge specimines. From the abstract:

Two of the ten dominant OTUs, closely related to the RG2-species Chryseobacterium hominis and Moraxella osloensis, showed significantly greater proportions in regularly sanitized sponges, thereby questioning such sanitation methods in a long term perspective. FISH–CLSM showed an ubiquitous distribution of bacteria within the sponge tissue, concentrating in internal cavities and on sponge surfaces, where biofilm–like structures occurred. Image analysis showed local densities of up to 5.4 * 1010 cells per cm3, and confirmed the dominance of Gammaproteobacteria. Our study stresses and visualizes the role of kitchen sponges as microbiological hot spots in the BE, with the capability to collect and spread bacteria with a probable pathogenic potential. (emphasis added)

A quick take-home message from the paper is that typical efforts to try to re-sanitize used sponges may only shift the sponges bacterial population toward a more potentially pathogenic population, and that it is probably a better idea to simply dispose of the sponge perhaps weekly and get a fresh one instead of microwaving it.

There's a nice write-up in the NYTimes science section, Cleaning a Dirty Sponge Only Helps Its Worst Bacteria, Study Says:

Stop. Drop the sponge and step away from the microwave.

That squishy cleaning apparatus is a microscopic universe, teeming with countless bacteria. Some people may think that microwaving a sponge kills its tiny residents, but they are only partly right. It may nuke the weak ones, but the strongest, smelliest and potentially pathogenic bacteria will survive.

Then, they will reproduce and occupy the vacant real estate of the dead. And your sponge will just be stinkier and nastier and you may come to regret having not just tossed it, suggests a study published last month in Scientific Reports.

Personally I've always hated the whole concept of kitchen sponges and now feel vindicated. Isn't something that can trap biomatter (bacteria, food particles) and keep it moist for extended periods of time the antithesis of what you would want to clean your dishes with?

I'm not looking for opinion, rather I'm asking about policy and practice. Since what we do in the privacy of our own kitchen sink is our own, I'd like to ask if kitchen sponges are generally approved for use in restaurants or institutional food preparation settings? Do they have sterilization protocols? Does this paper speak to those? 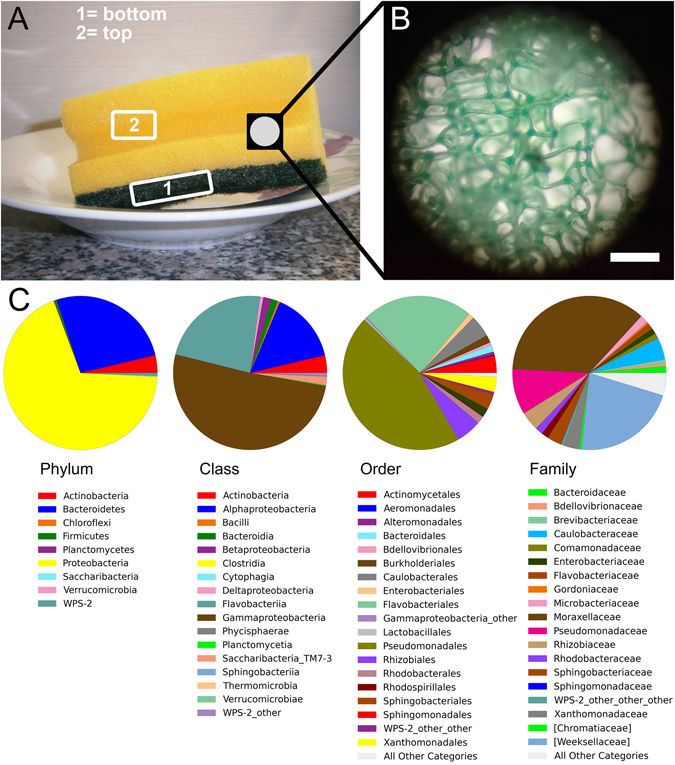 above: "(A) Kitchen sponges, due to their porous nature (evident under the binocular; (B)) and water-soaking capacity, represent ideal incubators for microorganisms. Scale bar (B): 1 mm. (C) Pie charts showing the taxonomic composition of the bacterial kitchen sponge microbiome, as delivered by pyrosequencing of 16S rRNA gene libraries of 28 sponge samples (top and bottom samples of 14 sponges, respectively). For better readability, only the 20 most abundant orders and families are listed." From here. 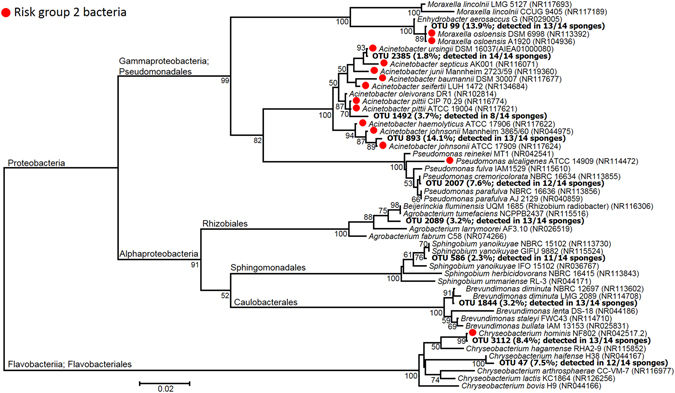 above: "Neighbor-joining phylogenetic tree of the ten most abundant OTUs in the analyzed kitchen sponges, as retrieved by pyrosequencing of 16S rRNA gene amplicon libraries. The relative abundance (percentage of the total sequence dataset) and the detection frequency (number of sponges where they were detected) are given in parenthesis after the OTU number. The most similar reference sequences retrieved by BLAST and EzTaxon alignment (type strains only) were included in the tree, followed by the corresponding accession numbers. Red circles indicate risk group 2 organisms, according to the German Technical Rule for Biological Agents No. 466 (TRBA 46631). Numbers at the nodes indicate percentage values of 1000 bootstrap re–samplings (only percentages ≥ 50 are shown). Scale bar represents substitution rate per nucleotide position." From here.

If your question is, indeed,

I'm asking about the nature of sponges, and if it's a good idea to use them to wash dishes and I'd like to stay focused on that.

I can answer that.

I like the sponge+mesh scrubber for washing dishes (not countertops or other) because the sponge conforms to the shape of things and reaches into crevices (with dishsoap and water) that I normally can't reach without more effort, and the mesh, well, scrubs. I don't care how grungy it gets; I rinse it out till it looks clean, throw it in the dishwasher when I run a load, which isn't often, and reuse until it's falling apart. Is it an ideal home for bacteria? Yep. You may think this is a red herring, but so is your toothbrush. Yet no one tells you to use a new toothbrush every week.

What is important is not what's in the sponge (or the toothbrush), but 1) how much of that bacteria stays deposited on the dishes washed with a sponge and rinsed with clean water, and 2) are any of the said bacteria dangerous to one's health?

Unfortunately, while the microbiome of the sponge was analyzed, the more important questions were not. There isn't a study yet that answers that aspect. So, until there is, I'll keep using my sponge without fear, as I do my toothbrush.

What has been shown is that lack of Gammaproteobacteria in one's environment predisposes an individual to asthma and allergies. Also worth mentioning is that the mouth has a very high density microbiome itself,

The oral microbiome is comprised of over 600 prevalent taxa at the species level, with distinct subsets predominating at different habitats.

The oral microbiome is largely still unknown, but includes some of the species found in the kitchen sponge (chicken or egg situation?) Or is it that the prevalence of these organisms in our environment (including our hands) seeds the sponge and the mouth?

While the similarities suggest a kitchen sponge core-microbiome, the more variable fractions might differ from region to region. Clearly, more data from different regions are needed to support this hypothesis, but apparently bacteria affiliated with the Moraxellaceae seem “typical” for kitchen sponges. Interestingly, Moraxellaceae have been consistently detected on sink surfaces, faucets, refrigerator doors and stoves30, i.e. surfaces that might be regularly cleaned with kitchen sponges, suggesting them as source for these surface contaminations. However, Moraxellaceae also represent typical human skin bacteria, suggesting also other sources for the contamination of kitchen surfaces. In turn, human skin (hands) might represent a source for the contamination of the sponges with Moraxellceae during use. Recently it has been shown that in particular Moraxellaceae get significantly enriched on cotton laundry during a domestic washing process.

Should we stop laundering out cotton clothing?

As a physician (a shameless appeal to authority here), I'll worry when studies show that dishes washed with a sponge are colonized by harmful bacteria. So I'll continue to use my sponge to wash dishes partly because I like studies to be meaningful to health and disease, partly because I like my dishwashing sponge, and partly because whatever I use to wash my dishes (except my bare hands, which I deem insufficient to the task) will become a breeding ground for all manner of bacteria.

For all other kitchen cleanup, I use a cloth, which is doubtlessly packed with bacteria as well, but I can fool myself into thinking it is cleaner because I launder them every couple of days, or immediately after a relatively dirtier task.

Buy a jug of hydrogen peroxide. A nice big one. Rinse the sponge with the peroxide before use and then wait 5 minutes while the bacteria bleach out and die.

THEN stick it in boiling water to kill any that are left, if you REALLY hate germs. (Although the peroxide should do the job on its own).

Hydrogen peroxide is a free radical/oxidizer. It desperately wants to oxidize something, and anything will do. It will oxidize the cell wall, weakening it, it will oxidize the phospholipid bilayer of the bacteria, which will pop the microbe, and even if the microbe has an unbreakable will to live, and can somehow stay intact up to this point, it will destroy the DNA and RNA inside. Seriously. If you actually want to see this happen, drop a piece of raw chicken into peroxide and see what happens.

The best solution is to keep the bacteria in an incredibly hostile environment to prevent bacterial growth in the first place rather than letting the sponges rot and re-sanitizing them after the fact. Additionally, keep unused sponges in a container of aqueous fluid - bacteria grow best in moist/slightly damp conditions rather than a pond.

If you're going to use sponges in the kitchen, put an open plastic container next to the sink containing dilute benzalkonium chloride or cetylpyridinium chloride (quaternary ammonium compounds), and perhaps some extra swimming pool grade chlorine. Soak the sponge in the container when it isn't being actively used. That should largely prevent bacteria and mold from growing.

Not the answer you're looking for? Browse other questions tagged microbiology microbiome sterilisation or ask your own question.

7
Bacterial cell lysis - what solution to use?
4
For people who work in microbiology labs, what software do you use to manage your strains?
4
Why lab technicians use indirect (antibody reaction) method for diagnosing?
1
Why don't bacteria eat food leftovers?
8
Do acetic acid bacteria use the electron transport chain when converting ethanol to acetic acid?
17
Why don't antiseptic agents kill 100% germs?
0
Resource for learning analysis of sequence data via QIIME 2