Do micro-organisms survive and live normally in a zero-g environment?

Edit: by zero-g, I mean an environment where you feel zero acceleration. Orbiting the Earth would be this since you're constantly in free fall. A rotating environment is not zero-g as the things inside will feel a "centrifugal" force pushing them into the wall (though it's actually a centripetal acceleration coming up against your intertia).

Several experiments with microorganisms have been conducted in the ISS (International Space Station), and the results were published in peer-reviewed journals, like this one for instance:

However, two things have to be clarified:

First, the environment at ISS is not really a zero-g environment. Actually, since the ISS is orbiting at only 400 km from the Earth surface, the gravity in the ship is almost the same of what it is here at the planet surface (89%, to be more precise). What happens is that the ISS is constantly falling, and that endless fall simulates a zero-gravity environment.

For this reason, one doesn't need to go to space to conduct micro-gravity experiments: they can be conducted here, on Earth's surface, in rotating containers (Tirumalai et al., 2017). For instance, this is a device to simulate micro gravity on ground, in a common lab:

Second: most of the experiences conducted on ISS focus on bacteria (and not on other groups of microorganisms, like protozoans and algae), and more specifically on their pathogenicity. The way your question was worded ("Are they able to move around in a drop of water like they do on Earth? Are they able to eat and reproduce normally?") make it seems that you are interested in things like locomotion and phagocytosis in unicellular eukaryotes, but that's not their main concern. Their main concern is that bacteria have different selective pressures in space, modifying their gene expression, and such "new" strains could be potentially dangerous for the crew.

Microorganisms impact spaceflight in a variety of ways. They play a positive role in biological systems, such as waste water treatment but can be problematic through buildups of biofilms that can affect advanced life support. Of special concern is the possibility that during extended missions, the microgravity environment will provide positive selection for undesirable genomic changes. Such changes could affect microbial antibiotic sensitivity and possibly pathogenicity. (emphases mine)

scientists have observed that in space, some strains of bacteria appear to exhibit enhanced growth and increased virulence (ability to cause disease).

Therefore, experiments like AES-1 (for "Antibiotic Effectiveness in Space-1") were conducted to compare gene expression from a non-pathogenic strain of bacteria (in that case, Escherichia coli) growing in micro gravity with the same bacteria growing on the ground. 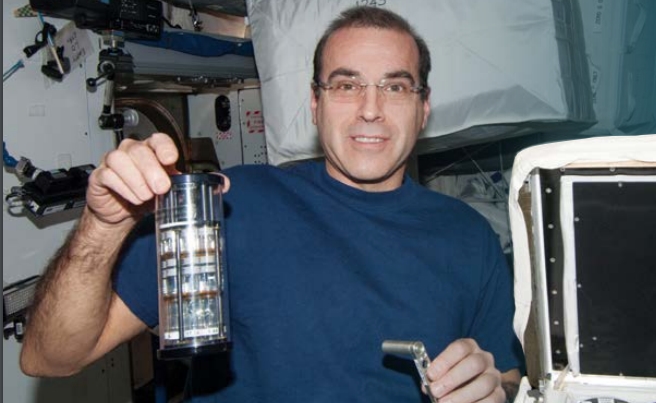 NASA Astronaut Rick Mastracchio using a crank to activate a group activation pack (GAP) onboard the ISS for the AES-1 experiment. (source: NASA, 2017)

The findings so far show that bacteria growing in micro gravity have less availability of nutrients. Still according to NASA (2017):

On Earth, the movement of bacterial cells through their media is influenced by the physical properties of the medium, including gravity-driven forces like buoyancy and sedimentation, as well as other forces, such as the viscosity of the medium. As the cells move, they interact with fresh media and absorb molecules of nutrients. The cells also excrete waste products that may sediment down, float up, or trail behind the cells if they move, while simultaneously diffusing away. However, in microgravity, these gravity-driven forces are absent, and ALTERED EXTRACELLULAR ENVIRONMENT MODEL the transportation of nutrients to cells and waste products away from cells are limited to diffusion-only transport. The altered extracellular environment model hypothesizes that the resulting reduction in the movement of molecules leads to less interaction of the cells with fresh media and thus reduced availability of nutrient molecules for absorption.

Analysis of those bacteria showed that they changed their gene expression. The genes over-expressed were mainly associated with:

To finish, a curious device is the "test tube" they use in micro gravity. In space you cannot simply manipulate test tubes like we do here, at 1g. It has to be a special device:

For the AES-1 experiment, the research team prepared 128 bacterial culture samples to send to the ISS National Lab. The samples were each contained in a fluid processing apparatus (FPA), a test tube specially designed by BioServe Space Technologies for use in microgravity.

A team of researchers at Rensselaer Polytechnic Institute, in New York, working with Lockheed-Martin Ames Research Center has found that one strain of a common type of bacteria thrives aboard space vehicles, even when faced with minimal nutrients. In their paper published in BMC Microbiology, the researchers describe an experiment they conducted aboard NASA Shuttle Atlantis that showed that Pseudomonas aeruginosa, a very common type of bacteria, grows more dense cultures when in space than it does on Earth when available nutrients are restricted.

Not the answer you're looking for? Browse other questions tagged microbiology microgravity or ask your own question.

2
Why does the mixture of infant formula with saliva provide an ideal breeding ground for disease-causing micro-organisms?
1
Autotrophic and heterotrophic organisms in anaerobic condition
4
Why don’t different organisms have nucleic acid genomes containing different bases and sugar?
9
Does rainwater contain many fewer micro-organisms than river water?