Can a human increase cold resistance through some practice?

Physiological measurements on practitioners are described in the paper Benson et al. (1982) Body temperature changes during the practice of g Tum-mo yoga. Nature 295: 234-236

Since meditative practices are associated with changes that are consistent with decreased activity of the sympathetic nervous system it is conceivable that measurable body temperature changes accompany advanced meditative states. With the help of H.H. the Dalai Lama, we have investigated such a possibility on three practitioners of the advanced Tibetan Buddhist meditational practice known as g Tum-mo (heat) yoga living in Upper Dharamsala, India. We report here that in a study performed there in February 1981, we found that these subjects exhibited the capacity to increase the temperature of their fingers and toes by as much as 8.3 °C.

In this paper the authors report measurements made on three subjects. The Figure shown below is the data for the third of these. The authors describe these results as follows: 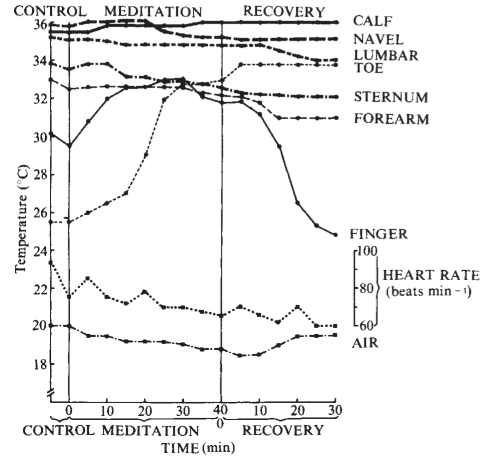 If you wish to try this for yourself, here is a description of the practice as quoted in the paper:

g Tum-mo yoga is a form of meditation which allegedly allows its practitioners to alter body temperature. Previously, only subjective descriptions of this phenomenon existed: "The neophytes sit on the ground, cross-legged and naked. Sheets are dipped in icy water, each man wraps himself in one of them and must dry it on his body. As soon as the sheet has become dry, it is again dipped in the water and placed on the novice's body to be dried as before. The operation goes on in that way until daybreak. Then he who has dried the largest number of sheets is declared the winner of the competition".

Not the answer you're looking for? Browse other questions tagged adaptation or ask your own question.

7
How do individual plants adapt to changes in temperature?
14
Are there animals that have evolved a resistance to human activity or encroachment?