What are the most efficient heat exchange sites on the human body?

Where on the body would be the best place to achieve the greatest cooling effect with a "cooling undergarment"? Concentrated over the kidneys, groin, inside the wrists, back of the neck?

Based on hte thermal maps from this paper it appears the most consistent place would be the along the spine on the back, with a small "V" like split near the neck. since this is where the most heat is radiation it is the place the most heat can removed. Oddly the neck appears to vary quite a bit in its cooling capacity, this may be a result of different muscle mass.

This does make sense physiologically since it is both the core of the body and he closest you can get to the largest blood vessels for the entire body, the abdominal aorta. It should also be consistent for males and females for this reason, even in the obese those portions of the body stay relatively uninsulated.

although according to trails for and with cooling vests and hyperthermia, no one part of the body can cool the entire body very quickly or consistently (the bodies own responses fight you on this) although it certainly helps with comfort. 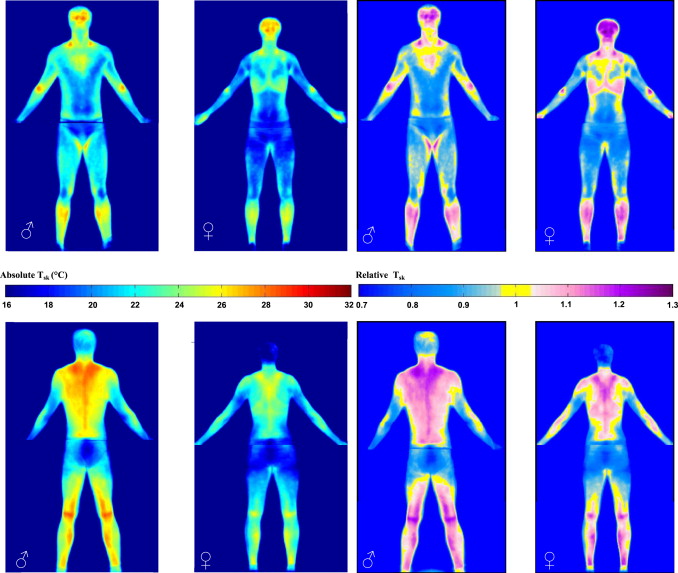 From personal experience, the best places to put a cooler (at maximum metabolic load) are across the back and over the neck and head.

Good candidate areas for a heat sink or exchanger:

Any region where large volume per unit time of blood travels close to the skin. Some dinosaurs are thought to have cycled blood through spiny fins on their back to cool down (obviously this works for non-dinosaurs too, and even better if the blood vessels in the fin are pressurized (see Are there any known examples of animals with air-conditioner type cooling? ).

Regions where a lot of metabolic activity takes place, including muscles in active use and "brown fat" (see https://www.webmd.com/diet/features/the-truth-about-fat)

Not the answer you're looking for? Browse other questions tagged human-biology human-anatomy human-physiology temperature heat or ask your own question.

2
Are there any known examples of animals with air-conditioner type cooling?

24
If body temperature is 37°C (98.6°F), why are most people more comfortable at around 21°C (70°F)?
6
Which organs in the body are responsible for measuring temperature?
1
Can signals travel "backwards" in the sensory pathway?
0
Influence of artificial sunlight on the human body
0
Does pouring water on your skin affect the evaporation process and heat loss?
2
Are there any place in human body that safe to implant things and have large amount of blood run through?