Synaptic connectivity in the newborn's brain

Assumed that the Hebb rule holds at least partially (of course, there are other factors at work during learning), I wonder if in a newborn's brain the areas where learning will take place are equally weakly connected by synapses (so the pathways will be "built up") or are equally strongly (maximally) connected (so the pathways will be "carved out") or something inbetween. Or are there areas of both/all kinds?

(I assume that there is a maximal connection strength beyond which no further strengthening takes place.)

According to a paper authored by Princeton researcher Deborah Sandoval:

At the time of birth, the human brain consists of roughly 100 billion neurons in the cortex (The University of Maine, 2001). During the early stages of development (between infancy and adolescence), the weight and size of the brain increases significantly (by up to a factor of 5). This increase in density is not contributed to the creation of a large number of new neurons (neurogenesis), but rather an exponential increase in synaptic growth, known as exuberant synaptogenesis (Huttenlocher & Drabholkar, 1998). At infancy, each neuron averages around 2,500 synapses, and at the peak of exuberant synaptogenesis (around 2-3 years of age) the number increases to around 15,000 (The University of Maine, 2001).

Shortly after this period of synaptic growth, the network experiences a decline in synaptic density as neuron connections that are used least-often are removed from the network. The process of eliminating/weakening the irrelevant and inefficient synapses during this developmental period is known as synaptic pruning. Synaptic pruning has been viewed as a learning mechanism, where the “pruning” or removal of a synapse is dependent on the neurons’ responses to environmental factors and external stimuli (Craika & Bialystokb, 2006). The processes of synaptogenesis and synaptic pruning in the developmental stages of the brain have been associated with an individual’s “critical period,” a time where an individual is highly receptive to environmental stimuli and, therefore, learning (Drachman, 2005).

Given the claims in those passages, it would seem that learning (for infants) takes place by initially developing an extremely large number of neuronal connections (most likely due to massive information exposure), and then selectively prunes synaptic sites due to a lack of various external stimuli keeping those axons/dendrites/synapses active; the remaining connections are then reinforced (continously excited). So, as you put it, it would seem that the infant brain both "builds up" and "carves out" neuronal connections for the sake of learning.

To further support this idea though, consider the following fMRI images that depict the functional connectivity of an infant's brain for the first year of life. (Function Connectivity of the Infant Human Brain) 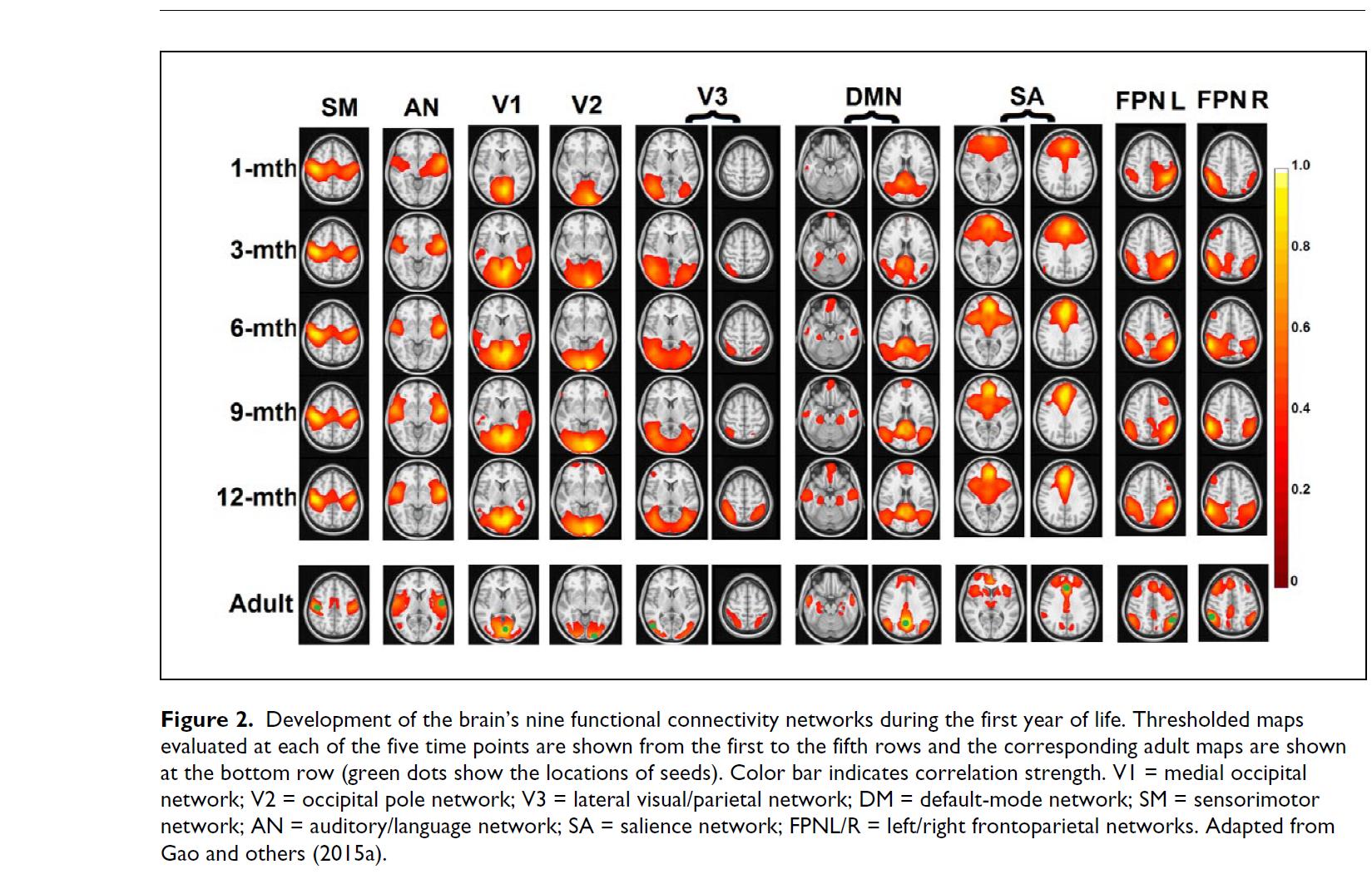 Pay special notice to the coloration differences between rows, within a given column, for the infant (first five rows). With dark red being least functional, and bright yellow being most functional, it can easily be seen that, as the infant gets older (is learning), occurrences of yellow tend to form as clusters within regions of red, which indicate locations of highest functional network activity.

Lastly, to assess the initial strength of each neuronal connection for an infant brain: when looking at the 1-month old scans, it appears that most all regions of the brain have a color that falls within an associated numerical range of .4 to .8, which would suggest that the brain, as a whole, begins at an almost "neutral" state.

Not the answer you're looking for? Browse other questions tagged neuroscience neurophysiology synapses learning neuroplasticity or ask your own question.

3
Can connections between neurons be weakened?
9
What is the latency between paired neuronal responses in the brain?
4
Differences between synaptic connections
1
What is synaptic clearance?
6
How does the synaptic cleft exist?
10
How are neurons / synapses “biased”?
0
What is meant by the term synaptic targeting?