How can we estimate what portion of a genome is repeating sequences without sequencing it?

Yes, it is possible to estimate the amount of repetitive DNA in a genome without sequencing. This was an important technique in the 1960s, referred to as Câ‚€t analysis and pioneered by Roy Britten.

The approach taken is to study the kinetics of renaturation of heat-denatured genomic DNA (in a fragmented form). As you can see in this idealised Figure taken from the Wikipedia article on the technique there are components which renature rapidly whilst other components renature more slowly: 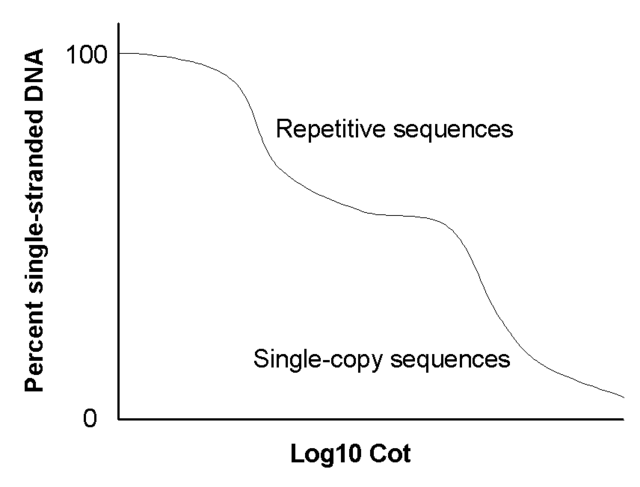 The interpretation of this is that repeated sequences renature rapidly because they are at a higher concentration than are single-copy sequences.

As stated at the linked Wikipedia article:

...it was through Câ‚€t analysis that the redundant (repetitive) nature of eukaryotic genomes was first discovered.

And finally here is a quotation from Britten and Kohne's 1968 paper in Science:

The rate of reassociation of the complementary strands of DNA of viral and bacterial origin is inversely proportional to the (haploid) DNA content per cell. However, a large fraction of the DNA of higher organisms reassociates much more rapidly than would be predicted from the DNA content of each cell. Another fraction appears to reassociate at the expected rate. It is concluded that certain segments of the DNA are repeated hundreds of thousands of times. A survey of a number of species indicates that repeated sequences occur widely and probably universally in the DNA of higher organisms.

In agreement with @Nicolai, I don't think you can!

Of course, if you assume having a priori knowledge about the fraction of repeated elements in related organisms, you could try to estimate it. Typically, if you consider a angiosperm, you know you're going to have much more repeated elements than if you consider a bacteria. Also, the size of cells and the size of the nucleus are correlated with the genome size (Gregory 2001) and the genome size is itself correlated with the number of repeating sequences (Flavell et al. 1974, Bennetzen et al. 2005). However, those correlations are pretty lose and it will not be possible to be accurate with these methods.

13
Sequencing the genomes of polyploid organisms
9
BLAST DNA Sequences Reversed
11
How can I find a complete human genome file?
1
Whole Genome Sequencing and Chromosome Counts
1
Can PCR duplicates have complementary sequences?
1
How to get phased haplotype from vcf file?
2
How are fragments isolated during shotgun Sanger sequencing?
2
How many palindromic sequences in human genome?
2
Multiple clones Sanger sequencing analysis