In a fitness landscape, is fitness relative or absolute?

I was asked if the fitness of a fitness landscape is absolute or relative.

Fitness landscapes are usually graphed with a fitness function that uses either phenotypes or genotypes in relation to fitness or one of its component.

More specifically, if the fitness measured is survival, and it's computed based on a quadratic model, does that means that every individual survival probability is an absolute measure of "fitness" (survival)?

Or since it's computed from a model, would it be better to find the relative contribution of a variable on the predictor in the model and say that the "fitness" is relative to a trait if it's computed with multiple traits?

My specific questions are:

In the image below, I've graphed all the points (black line) and I've removed the 3 lowest values of y for the 3 largest x values (red line). If I was calculating the fitness of the individuals with or without the 3 smallest points for the 3 largest x values, then the fitness of all the other individuals would be affected (except at x~38 and y~38). 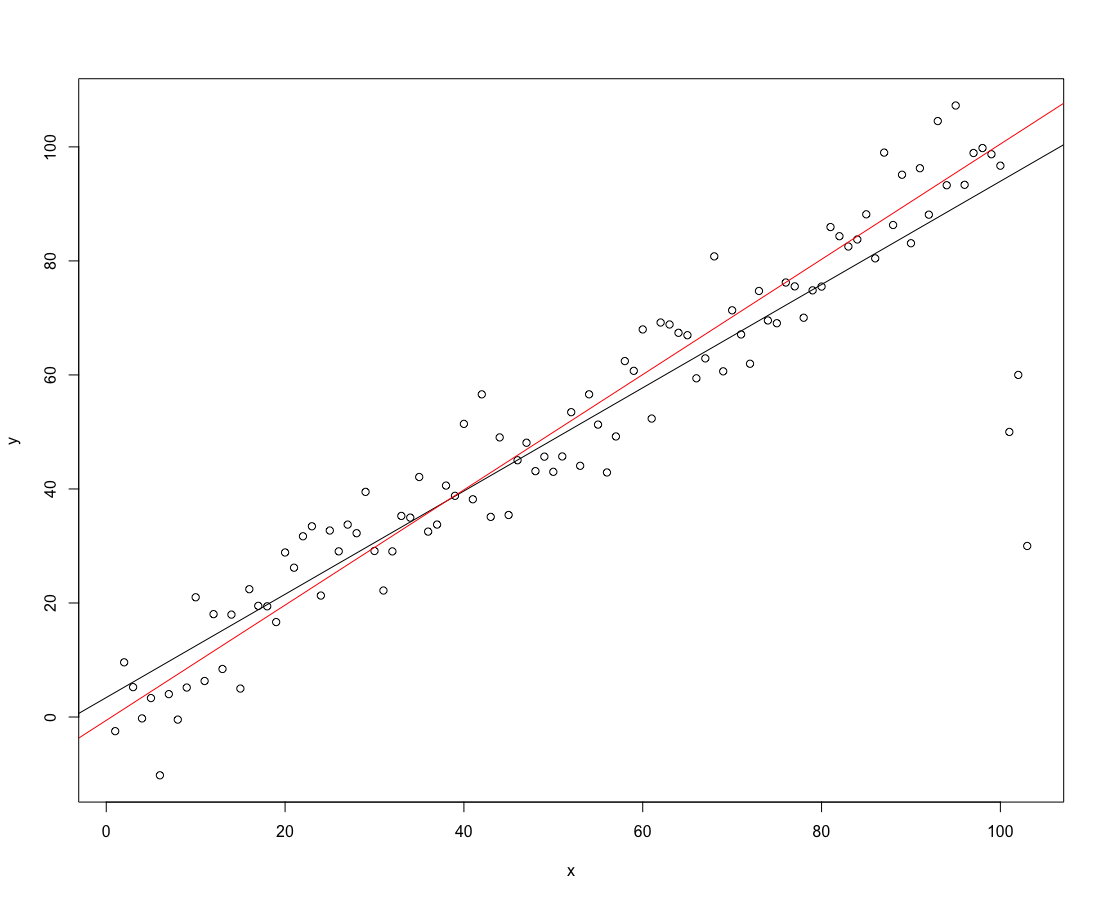 Another example with crossbills: 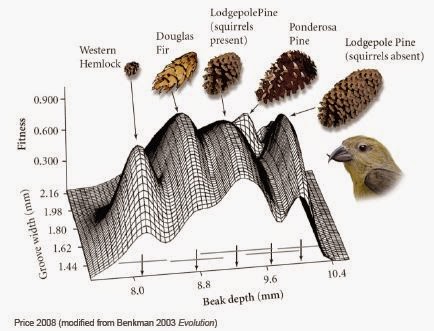 Would you say it's relative or absolute fitness. Here the fitness measure is "performance" of eating certain types of seed.

In this article they are saying (Morrissey & Sakrejda 2013):

Regression analyses are central to characterization of the form and strength of natural selection in nature. Two common analyses that are currently used to characterize selection are (1) least squares–based approximation of the individual relative fitness surface for the purpose of obtaining quantitatively useful selection gradients, and (2) spline-based estimation of (absolute) fitness functions to obtain flexible inference of the shape of functions by which fitness and phenotype are related. These two sets of methodologies are often implemented in parallel to provide complementary inferences of the form of natural selection.

Are least squares-based approximation of the individual always computing relative fitness surfaces? For spline, is it always absolute values?

By experience, most of the time, authors are talking about relative fitness. To confirm my feeling, I looked at the three randomly chosen theory papers from the first page of results that Google Scholar returned when searching for fitness landscape and they all use fitness as a relative measure. The papers are Derrida and Peliti (1991), Merz and Freisleben (2000) and Woodcock and Higgs (1995).

However, I do not think this is in the definition of a fitness landscape. One could work with absolute fitness and still call his model a fitness landscape. I think that therefore the answer is specific to every model considered. Note that even the "landscape axes" for which a fitness value is assigned can be of different nature. Typically, one can associate phenotypic or genotypic and/or even environmental axes.

What type (relative vs absolute) of fitness is shown in a fitness landscape?

A fitness landscape is just a graph with a regression line/curve. The reason why this graph is referred to as "fitness" is because it's specifically illustrating how well "fit" an individual is to survive & reproduce within its population; "landscape" however, has no special or unique meaning, and can freely be interchanged with "graph".

With this in mind, a fitness landscape can depict both types of models -- relative and absolute. I believe your confusion/uncertainty may stem from the fact that these two population measurements describe two different things, and, that the use of fitness landscapes isn't unique to just one of them.

(I would really like to address the differences between relative and absolute fitness models at this time, however, I feel that it would get to be off-topic, as that would require somewhat of a lengthy explanation/comparison. I strongly suggest posting a new question that asks this, and I will happily respond. That is, if you even want clarification between the two.)

Does the type of fitness change if you change way to model it (For example, I want to know specifically for a quadratic model vs a spline)?

Depending on the type of fitness model you're portraying (absolute vs. relative), the amount of variability in your data will (most likely) drastically differ; i.e., how sharp of a curve your data may produce within a given interval of your datapoints. That being said, different fitness models do require different regression models in order to most accurately characterize the data.

With absolute fitness, you'll be able to (much) more accurately describe your data using a non-linear equation that can handle a considerable amount of flexibility. This often in the form of a cubic equation (contains a term with $x^{3}$). Higher degree equations can also be used (contains a term with $x^{4}$, or $x^{5}$, ..), however, your regression model may become "too sensative" to variability, and as a result, will cause your (regression) model to be more inaccurate than it should be. Also, because of the sensativity & flexibility of these regression models, smoothening (spline) functions are applied to the model, so that the data isn't quite as chaotic; imagine the difference between a stock market graph (e.g., weierstrass function), with that of a more traditional, "smooth" graph (e.g., sigmoid or logarithmic function).

And then, with relative fitness, you'll want to use either a linear, or quadratic, regression model. Due to the nature of what relative fitness models describe, there isn't nearly as much of a change in your data, given an interval. Because of this, a simple linear (contains $x$ term, and no higher powered term) or quadratic (contains an $x^{2}$ term and nothing higher) regression model will sufficiently represent your datapoints.

(If you'd like more of an explanation as to the nature of absolute & relative fitness models, and why they may or may not bring with them a higher amount of variability in their data, that would be addressed when discussing the differences between the two models, or, you can also open a question that specifically addresses this.)

Are least squares-based approximation of the individual always computing relative fitness surfaces? For spline, is it always absolute values?

Not the answer you're looking for? Browse other questions tagged evolution fitness or ask your own question.

3
How is it possible for the absolute fitness to be more than 1?
2
What is the difference between absolute and relative fitness?

9
Is local equilibrium a reasonable assumption for evolutionary processes?
1
Assumptions of the models for haploid and diploid selection
5
Soft and Hard selection
7
Hamilton's derivation of direct fitness from his 1970 paper
7
How does the value of K determine number of local optima in NK model?
1
How to calculate relative fitness from absolute fitness with recapture data?