I have 3 questions that are interrelated:

By contrast, if a place cell from the rat hippocampus is examined in the same way (i.e., by placing a dot at the location of the rat's head whenever the cell emits an action potential), then the dots build up to form small clusters, but frequently there is only one cluster (one "place field") in a given environment, and even when multiple clusters are seen, there is no perceptible regularity in their arrangement.

So then what are those "clusters", i.e. I guess the place fields, are they the ones I highlighted in red on this picture (sorry, I am a very visual learner!) and also, why do they fire in clusters? 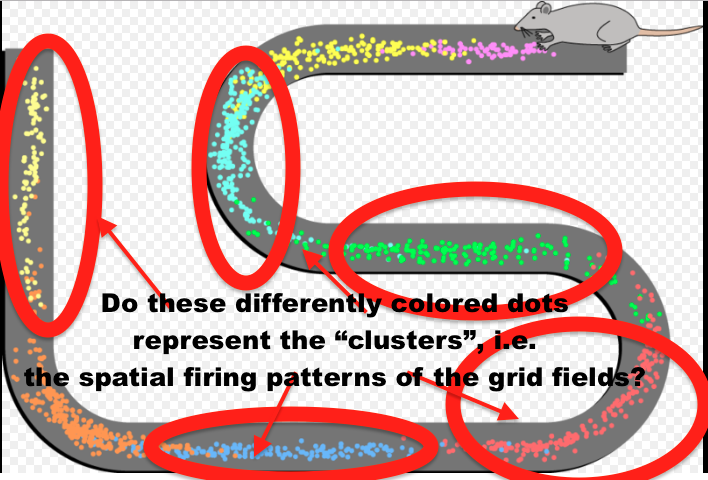 The Wikipedia Page has the following description of this picture but I am still not sure I am understanding it correctly:

Spatial firing patterns of 8 place cells recorded from the CA1 layer of a rat. The rat ran back and forth along an elevated track, stopping at each end to eat a small food reward. Dots indicate positions where action potentials were recorded, with color indicating which neuron emitted that action potential.

What is the physiological or anatomical difference between.... Available from: https://www.researchgate.net/post/What_is_the_physiological_or_anatomical_difference_between_place_cells_and_grid_cells_in_the_hippocampus [accessed Aug 16, 2017].

1.1. "Field" is just a term that refers to a region of space. I'd say the Merriam-Webster definition closest is #6:

1.2 The picture you have is probably a schematic, but what it depicts is a recording from several different cells. Each cell is assigned a color. Every time the cell fires a spike, there is a dot placed at the location in space where the animal was at the time of the spike. You let the animal run through the maze and get a record of lots of these points, and you see that they cluster together into place fields.

2&3 - These questions are getting to be a bit too broad and also you are only supposed to ask one question per submission, so I'll be very brief here. Grid cells are located in an entirely different part of the brain, the entorhinal cortex (part of neocortex), although this part does project to the hippocampus where place cells are found.

Grid cells fire in regular patterns in a spatial field, like in this image: 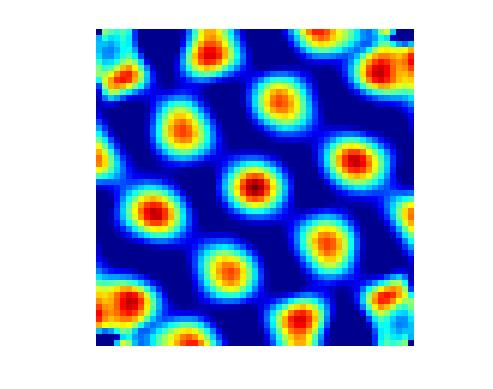 They also keep their relationship of firing locations relative to each other constant across contexts. You can think of them like a nested coordinate system.

Place cells do not do this. For a given environment, they seem to be somewhat randomly arranged relative to each other. Most likely, what actually happens with place cells is that if you could record from all of them, there would be a unique combination of cells active at any location, and this location could then be associated with other information like "I found food here."

Perhaps you could think about grid cells like a GPS location, but place cells are like a map marker.

Not the answer you're looking for? Browse other questions tagged neuroscience terminology etymology or ask your own question.

6
Hebbian theory "fire together" clarification
10
What is the mechanism behind tinnitus?
1
Do individual neurons communicate with the origin of thoughts?
3
What determines the shape of the center-surround receptive fields of retinal ganglion cells?
6
How do place cells switch their response patterns when the subject moves to a different environment?
2
What are the response frequencies of sensory neurons?
2
Difference between spiking and firing
3
Confusion about the construction of the rat's mental map