Please identify this bird? There are bright red feathers at the bottom of its tail. What do we call these feathers? 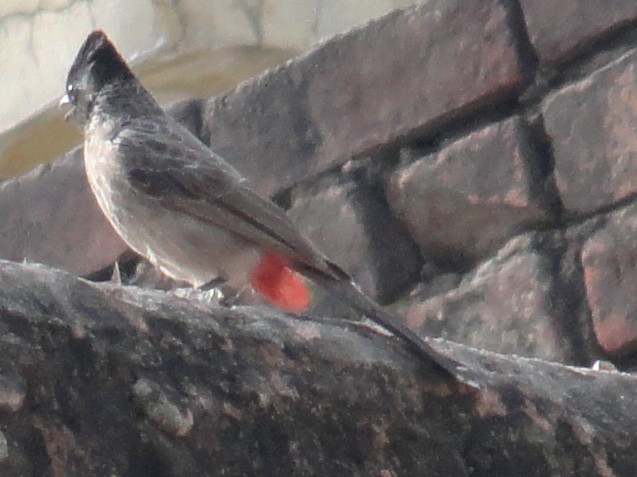 update: Location is North India. Temperature is around 35° C.

I am hesitant to provide 'positive' ID without location information, but this bird strongly resembles a Red-vented Bulbul (Pycnonotus cafer). The species is native to the Indian subcontinent, but is a common invasive species in many other parts of the world. 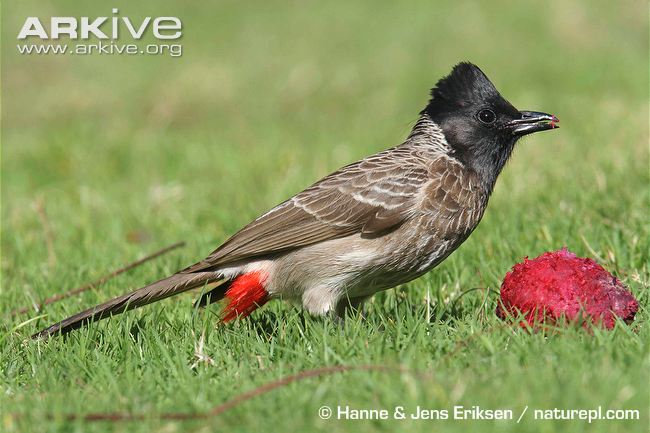 Key identifying features, with features visible in the photo given in bold (description from NZBirdsOnline):

Red-vented bulbuls are slim, starling-sized songbirds with predominantly dark plumage. They are typically bold and conspicuous, with repetitive, monotonous calls. Their slim build and curved bill are reminiscent of a honeyeater (e.g. bellbird or tui), although they are not closely related. The two most distinctive identification features are a small erectile crest on the crown (giving them a square-headed Roman helmet look when the crest is raised) and the diagnostic bright red patch between the base of the legs and the undertail. The head, hindneck and upper breast are glossy black, with a circular brown patch over the ear. This dark hood becomes streaked or scaly on the lower breast and merges into the pale grey belly. The upper wings and mantle are mid-brown with pale margins when in fresh plumage, creating a scaly appearance. The rump is white, and the tail is long and blackish with a prominent white tip. The bill, eyes and legs are dark. The sexes are alike, although males are slightly larger. Juveniles are dull brown with an orange or pinkish (cf. red) vent.

edited for the addition of location information

As the photo was taken in Northern India, the bird is almost certainly a Red-vented Bulbul. The Red-vented Bulbul is common throughout India, and there are no similar species in the range that could easily be confused with this species.