Why do soil bacteria produce nitrous oxide as a result of anhydrous ammonia fertilizer application?

The NPR article and 4 minute audio news item Can Anyone, Even Walmart, Stem The Heat-Trapping Flood Of Nitrogen On Farms? discusses unexpected contributions of greenhouse gasses from the manufacture of consumer goods. One example is bread, or agricultural products in general, and part of this is the anhydrous ammonia used in fertilizer.

Carbon dioxide seems to be a bi-product of the manufacture, but nitrous oxide a more potent greenhouse gas is produced by bacteria in the soil as a result of application of ammonia.

Manufacturing nitrogen fertilizer is energy-intensive, burning lots of fossil fuels and releasing carbon dioxide. What's just as damaging, and perhaps even more so, is what happens when it's spread on a field. Bacteria feed on it and release a super-powerful greenhouse gas called nitrous oxide.

These bacteria are naturally present in the soil, says Philip Robertson, a researcher at Michigan State University, "but once they get exposed to nitrogen fertilizer, they really light up" and pump out nitrous oxide.

Question: Is it common for most soil bacteria to make significant quantities of nitrous oxide after ammonia is added, or is there only a small subset of bacteria present in soil that might do this? Also, what is the metabolic pathway in this case? Is this a waste product from "eating" ammonia, or something more complicated/subtle?

below: Anhydrous ammonia tanks in a newly planted wheat field. Walmart has promised big cuts in emissions of greenhouse gases. To meet that goal, though, the giant retailer may have to persuade farmers to use less fertilizer. It won't be easy. TheBusman/Getty Images. From here. 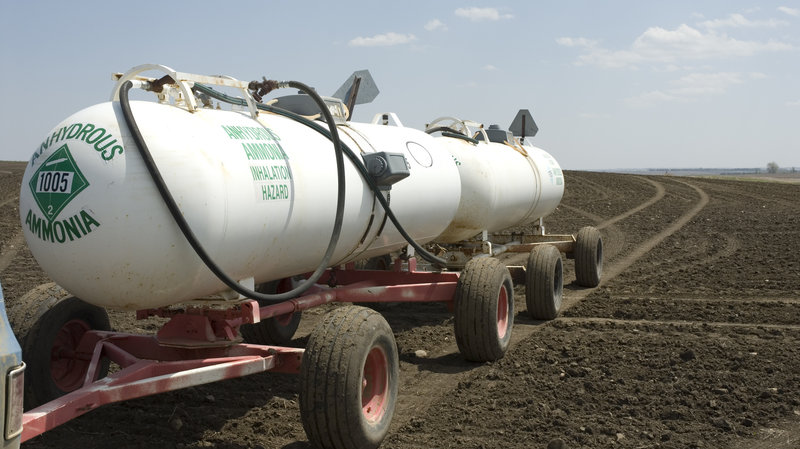 Addressing the first part of your question:

Is it common for most soil bacteria to make significant quantities of nitrous oxide after ammonia is added, or is there only a small subset of bacteria present in soil that might do this?

No, not all soil bacteria can oxidize ammonia. According to wiki:

The role of archaea in the soil nitrogen cycle is not well-known yet, although it could be greater than that of bacteria. On the other hand, the role and metabolism of AOB are more or less studied.

The process of ammonia-oxidizing is also called nitrification and AOB sometimes referred as nitrifying bacteria. The most known bacteria genera from this group are Methylomonas, Nitrosococcus, Nitrosomonas and Nitrosospira. I think the most studied species is Nitrosomonas europaea Winogradsky 1892.

The second part of the question:

What is the metabolic pathway in this case?

Although, the metabolic pathways vary in different genera, let's look at ammonia metabolism in N. europea.

In the simplest case, it is a two-step process. According to KEGG:

Step 1. The enzyme ammonia monooxygenase converts ammonia to hydroxylamine. The enzyme contains copper, iron and possibly zinc. It requires two electrons, which are derived indirectly from the quinone pool via a membrane-bound donor. The reaction is:

Step 2. The enzyme hydroxylamine dehydrogenase converts hydroxylamine to nitrite. This reaction requires specialized cytochrome as an acceptor of electrons. The reaction is:

Further destiny of released nitrite can be different. In one process it could be oxidized by different microorganisms (bacteria, archaea) to nitrate (NO3) which could be consumed by plants or washed out to deeper horizons with water. In another case, nitrite, nitric oxide and nitrate could be involved in process of denitrification. During this process, a group of denitrifying organisms (bacteria, archaea and fungi) consume nitrogenous compounds and reduce them to nitrogen (N2), which can escape to the atmosphere. This process can occur through different metabolic pathways mainly with aid of reductases like nitric oxide reductase. One of the possible intermediate product of such pathways is a nitrous oxide (NO2). If N2O escapes from cells we can observe a resale of nitrous oxide from soil.

Let's return to your first question, and particularly to the part where you ask about significant amounts of nitrous oxide.

First of all, nitrification is a natural process and is a part of the nitrogen cycle. Some organisms fixate nitrogen and convert it to ammonia, some oxidize ammonia to nitrous compounds and some of them reduce it back to nitrogen. It occurs everywhere virtually in all terrestrial and water biocenoses. In a healthy ecosystem, the inflow of nitrogen is theoretically equal to the outflow (with temporal deposition in trophic chains). In such natural conditions, the release of nitrous oxide should be neglectable.

The situation changes significantly when we add an ammonia to soil artificially as a fertilizer. The main problem is that we break an equilibrium between nitrogen fixation, nitrification and denitrification. The second big problem is that an ammonia is toxic for most organisms, so we can alter microbiome. In such case, we can expect an excess of products of nitrification and improper denitrification with exaggerated levels of released nitrous oxide. The actual proportions vary significantly depending on both biotic and abiotic conditions, therefore it is difficult to predict real levels of nitrous oxide released without in situ examination.

if I give you a can of anhydrous ammonia, and I drop in a match, it will blow up, yielding nitrous oxides.

it is an exothermic energy releasing reaction.

bacteria figured this out, and use this same chemical reaction, albeit with more steps, to derive their own energy, and therefore drive their own matabolism.

like the way a marshmallow (sugar) will burn, our bodies have figured out how to burn sugar without heat and yield ATP, certain bacteria do the same, but with ammonia. the nitrous oxides are then converted into nitrites by other bacteria, and finally to nitrate by yet other bacteria. And finally, some of the nitrates go into the plants, while others, get turned back into nitrogen, like when bitrate in gunpowder explodes (cool!)

this is called "nitrification" as some people in the comments have said.

google the nitrogen cycle if you havent already. it is very fascinating.

Not the answer you're looking for? Browse other questions tagged bacteriology soil nitrogen-cycle or ask your own question.