The source of ABA for inducing stomatal closure in the detached leaves?

As you may know, when leaves detached from the whole plant close their stomata to maintain water and prevent wilting. Could you please let me know what is the mechanism of stomatal closure in the detached leaves? if it is induced by ABA, what is the source of ABA under these conditions?

Please provide me the corresponding links for your answers as I couldn't find an appropriate answer for the question.

I think that ABA could be one of the player involved on the stomatal closure in detached leaves. In fact originally it was think that ABA is the main player on abscisic leaf but this in correct only for a small number of plants. Moreover ABA is produce in terminal buds to slow down the plants growth and prepare it for the winter (it is also produce in response to water depravation by roots). So probably ABA could also migrate in leaves and provoke the stomata closure. This is what wikipedia suggest by looking on Abscisic acid.

ABA was originally believed to be involved in abscission. This is now known to be the case only in a small number of plants. ABA-mediated signaling also plays an important part in plant responses to environmental stress and plant pathogens [...].

Abscisic acid owes its names to its role in the abscission of plant leaves. In preparation for winter, ABA is produced in terminal buds.This slows plant growth and directs leaf primordia to develop scales to protect the dormant buds during the cold season. ABA also inhibits the division of cells in the vascular cambium, adjusting to cold conditions in the winter by suspending primary and secondary growth.

By digging more on internet I found that abscission (the shedding hence the dropping of the plant leaves) occurs after the senescence of the leaf. In fact, before the leaf falling, the plant draws resources out of leaves and degraded the chlorophyll. This will cause also the change of colour (the leaves are green thanks to the presence of chlorophylls).

Finally I think that the stomata closure is also due by the darkness and the senescence. In fact the open or close state of stomata is mediate by guard cell and their state (swollen guard cell stomata is open, shrunken guard cell stomata is closed. Those state are influenced by Temperature, Darkness, Photoperiod, pH and also ABA. Hence when the plant start to take out nutriments from leaves, on leaves there will be a rise on pH and a diminution on water contents that will provoke the closure of stomata. Those two image could maybe help 3. 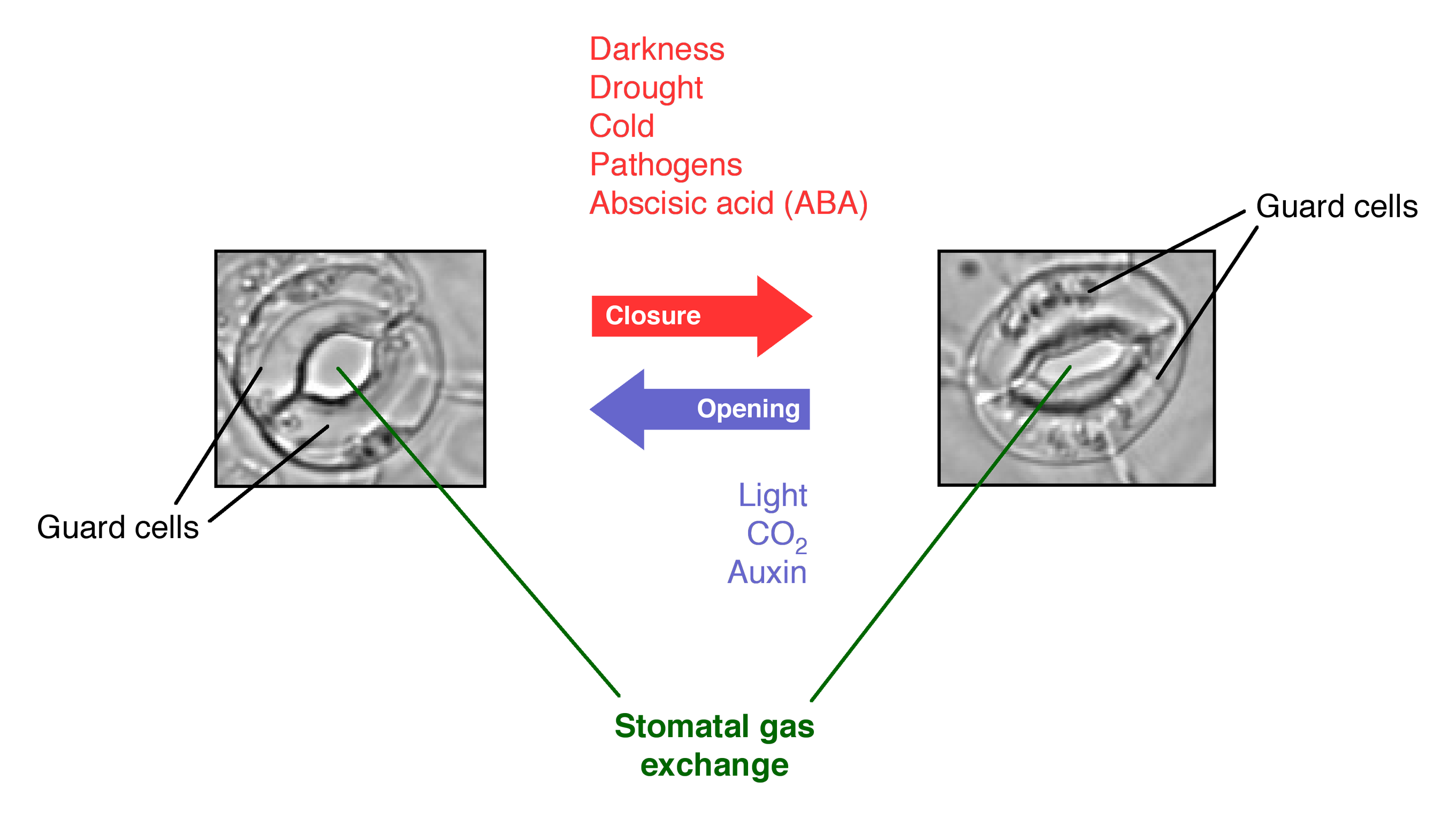 Hope my answer will help.

9
What factors affect the rate of transpiration in plant leaves?
4
H₂S as a source of electrons for plants
3
Why are there more stomatal openings on the lower surface of a dicot leaf?
10
How fast is water transported from roots to leaves?
2
Ions in Stomatal Opening Mechanism
2
Do any plants grow leaves beneath the ground?
4
Biological data source of trees