Why are excess amino acids toxic?

While learning about deamination, I learnt that excess amino acids must be converted to urea and excreted, since the nitrogenous group can alter the pH and affect proteins. But shouldn't the pH stay the same since they have NH2 that becomes ammonia as well as a carboxyl group (weak base and acid). So why are amino acids deaminated?

Firstly excess amino acids are deaminated to form keto acids and not urea. Urea is formed utilising the ammonium released as a consequence of deamination via Ornithine-Arginine cycle

Secondly the released ammonium is toxic because of two reasons:

1)pH changes in the tissues (as mentioned in the question)

2)disturbs the balance of K+-Na+ gradient between the intra and extracellular fluids.

ammonium ions compete with potassium ions for inward transport, over the cytoplasmic membrane, via potassium transport proteins like the Na+/K(+)-ATPase and the Na+K+2Cl(-)-cotransporter.

This causes increased demand for maintenance energy, caused by the need to maintain ion gradients over the cytoplasmic membrane.That is why converting the ammonium to urea is neccessary.

why amino acids are deaminated: to form glucose via gluconeogenesis or to form anaplerotic compounds

why acidic group of keto acids fail to neutralise the basicity of ammonia: because they keep getting utilised for the energy expenditure that increases in the tissues as mentioned above.

In addition to what @CATHARANTHUS has said I would like to mention that ammonia has its direct effects on brain metabolism.

Ammonia is an important substrate as well as a product for at least 16 different enzymatic reactions in the brain (Cooper and Plum 1987).

For instance its effect on Tricarboxylic acid cycle(TCA) is as follows:

So accumulation of ammonia will shift the equilibrium towards right hand side resulting in depletion of alpha ketoglutarate ,a key intermediate in TCA cycle which ultimately, results in decreased production of ATP, so one can say that ammonia exerts its toxic effects on brain by impairing ATP formation. 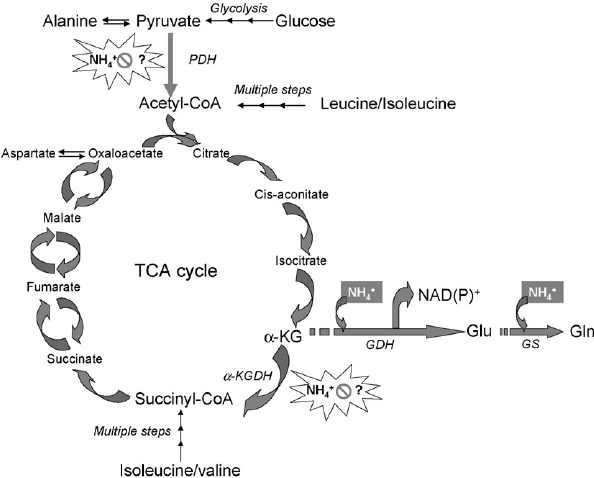 Not the answer you're looking for? Browse other questions tagged amino-acids liver or ask your own question.