Why is the prefrontal cortex called such?

What does cortex means? Brain?

My background: I am a programmer. I just want to understand humans brain the way a programmer understand computer. It seems that we don't have CPU. We have huge analog based memory. And we got registers instead of tons of abstract variables. Understanding why certain part of the brain is named under certain things will help me a lot in remembering where exactly that thing is and why. It's something very useful in my ways of learning math and programming.

Basically there are 2 theories.

Some people told me to just look that up on wikipedia. If you can show me something in wikipedia explaining the exact answer I am looking for I will be very happy.

The prefrontal cortex (PFC) is a part of the frontal lobe (Fig. 1).

[A part] demarcated from the rest of the organ by a fissure (crack), sulcus (groove), connective tissue or simply by its shape. For example, there are the frontal, parietal, temporal, and occipital lobes of the brain.

The outer or superficial part of an organ or bodily structure (such as the kidney, adrenal gland, or cerebellum or a bone); especially: cerebral cortex

The frontal lobe is called as such, because... it's in the front of the brain.

anterior to or involving the anterior part of a frontal structure

situated before or toward the front 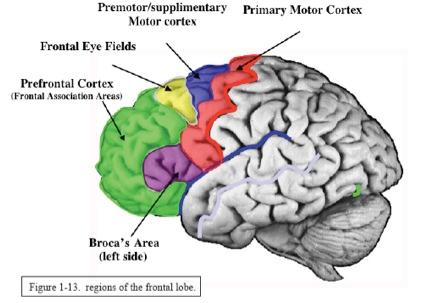 I think the term pre-frontal does not mean anatomically in the front of the frontal lobe of the brain. This is regarded to the history of discovered area , that the choice of the term was based on the prefrontal bone present in most amphibians and reptiles.you can find this in etymology part ▶️enter link description here

Not the answer you're looking for? Browse other questions tagged brain terminology neuroanatomy etymology or ask your own question.

0
What is the difference between prefrontal cortex and frontal lobe?

8
Is the six-layer cortex model of the mammalian cortex still the most accepted model?
1
Is the motor cortex identical to the sensorimotor cortex?
3
Why are plant buds called 'eyes'?
2
Confusion about the brain regions - temporal cortex, hippocampus and and white matter
2
Why are the posterior and anterior inferior temporal cortex called area TEO and area TE respectively?
1
Why are the grey matter structures of the inferior medial frontal lobe not directly (not via white matter) connected?
2
Why are plasmids called plasmids?
0
Which parts of the cerebral cortex don't belong to the neocortex?