I am currently digging in some books to understand the three major metabolic pathways involved in physical training. The most difficult one for me is the glycolytic non-oxidative pathway (also more commonly known as the anaerobic lactic pathway) and I would like some help from people versed in this field.

In this pathway, as far as I understand, glycolysis produces pyruvate. In this process, NADH and H+ ions are produced along the way.

Then, if there is still a high energy demand (i.e. glycolysis is still necessary); NADH binds with pyruvate to form lactate and free up NAD+ which is necessary to sustain the glycolysis (otherwhise, pyruvate would be consumed via an oxidative pathway i.e. oxidative glycosis or slow glycolysis). This can theoretically continue until glycogen is depleted or severely diminished as far as I understand.

The problem comes then from the H+ ions produced during the glycolysis. These ions cause acidosis of the muscles if not removed. However, they can be removed if sufficient oxygen is present to form water. And here is my main question :

I understand this is a difficult question and maybe there is no precise answer at the moment. If you could point me toward a good ressource that deals with this question, I would be glad. I currently base myself on McArdle book on exercise physiology.

I am going to try to walk through this problem, in a step-by-step manner in relation to exercise, starting from at rest, and ending at the point in which the body is no longer able to maintain its energy-charge.

The body mainly utilises oxidative phosphorylation to maintain its energy-demands. In cells where great amounts of energy need to be produced very quickly, eg. cells that are actively replicating, glycolysis is the preferred mode of energy production because this pathway is able to very quickly produce large amounts of ATP, and lactate is able to quickly diffuse in to the bloodstream. Lactate will travel in the bloodstream, to the liver, to be recycled back to glucose through an anabolic process called gluconeogenesis. This recycling pathway is known as the Cori-cycle. Essentially, what is happening is, parts of the body that are in need of high amounts of energy, will "dump" their wastes to the bloodstream, to be dealt with by other organs.

As these stores begin to become depleted, the body will begin to go in to overdrive, in an attempt to restore itself to a resting-state. Thus, your heart-rate will increase, breathing will become faster, and glycolytic pathways will be activated through feed-forward mechanisms.

I have touched on this before, in another post that you may find interesting. I believe that if you read through this though, that you will understand why there is low levels of oxygen, and what the body does to attempt to circumvent this.

There will be very low levels of oxygen throughout the active tissues. The body will do everything it can to try to restore this, but it will ultimately fail to do so. Thus, the only real option it has is to rely on glycolysis in the tissues that are causing "problems". The rate of ATP-production is most dependent on the rate at which a cell can take glucose in to the cell.

Of course, the muscles that are being used will only be concerned with producing energy. Therefore, all of the lactate that they produce will be dumped in to the bloodstream, where it will travel to the liver, in the previously mentioned cori cycle.

Overall, the issue is not in the muscle-cell's ability to regenerate NAD+. This is the easy part, seeing as there is no net-change in the concentration of NAD+ when glucose is converted to lactic acid. And also, things such as malate-aspartate shuttles, citrate-pyruvate shuttles, and glycerol 3-Phosphate shuttles can be used to maintain redox-balance. These are only but a few examples of how to maintain redox-balance.

You must also remember that carbohydrates are not the only class of molecules involved in these cycles; degraded proteins and fats can also be used to supply the TCA-cycle with alternative means of energy-production. Pyruvate probably would not even be able to be converted in to acetyl-CoA anyway, since pyruvate dehydrogenase requires the presence of oxygen to function.

Problems however do arise once the body is unable to deal with all of the waste that it is producing. There will reach a point, where the liver cells will be physically incapable of accepting any new lactate-molecules. And so, lactate will accumulate in the bloodstream. With an accumulation of lactate in the bloodstream, lactate will be unable to diffuse to the outside of the cell. Thus, cells will be unable to convert pyruvate in to lactate.

I tried to make a little illustration of what I mean above, below. Hope this helps to conceptualize it. 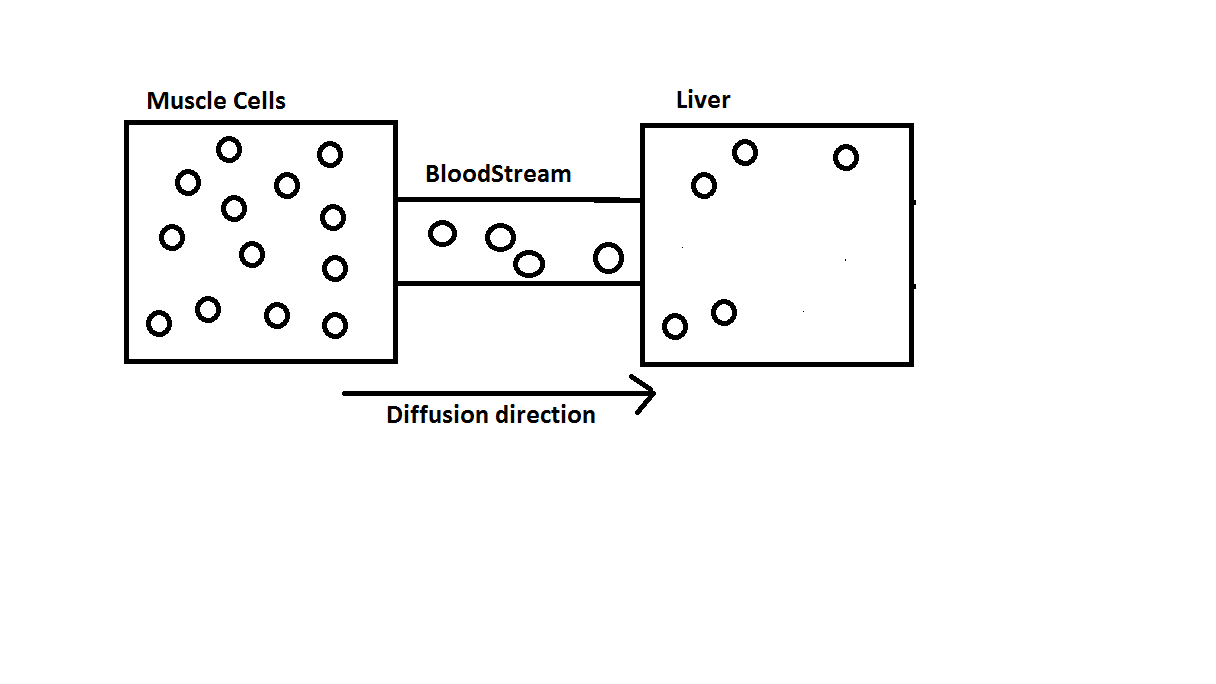 In this second picture, there is too much lactate for diffusion to occur. 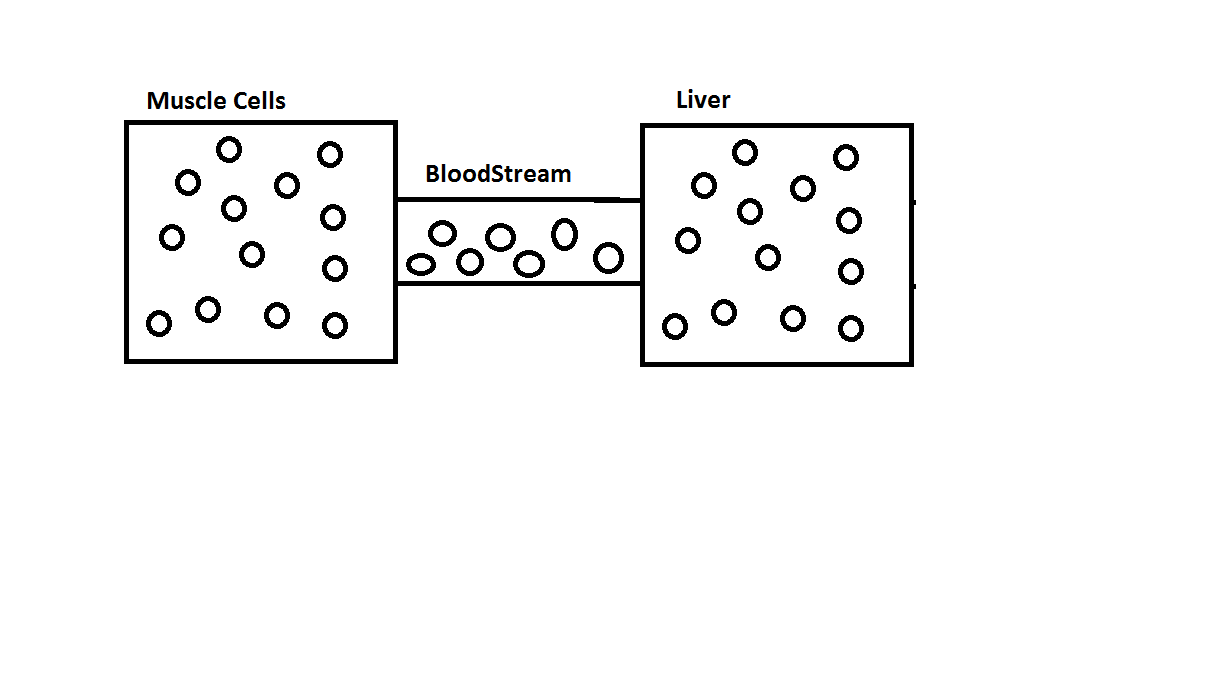 In these experiments, the researchers were trying to figure out what proportion of ATP would be created by glycolytic and oxidative pathways in muscle cells (and other cell-types). Their findings, were that, indeed, the majority of ATP production in muscle cells comes from glycolysis.

During exercise, this difference in amounts of ATP production between glycolysis and oxidative phosphorylation would probably be even greater.

Fantastic question! Hopefully this somewhat helps. It's very difficult to simply this process as it's quite complex.

So the respiratory chain cannot process all of the H+ joined to NADH.

Continued release of anaerobic energy during glycolysis depends on NAD+'s availability to oxidize 3-phosphoglyceraldehyde -- otherwise glycolysis grinds to a halt. 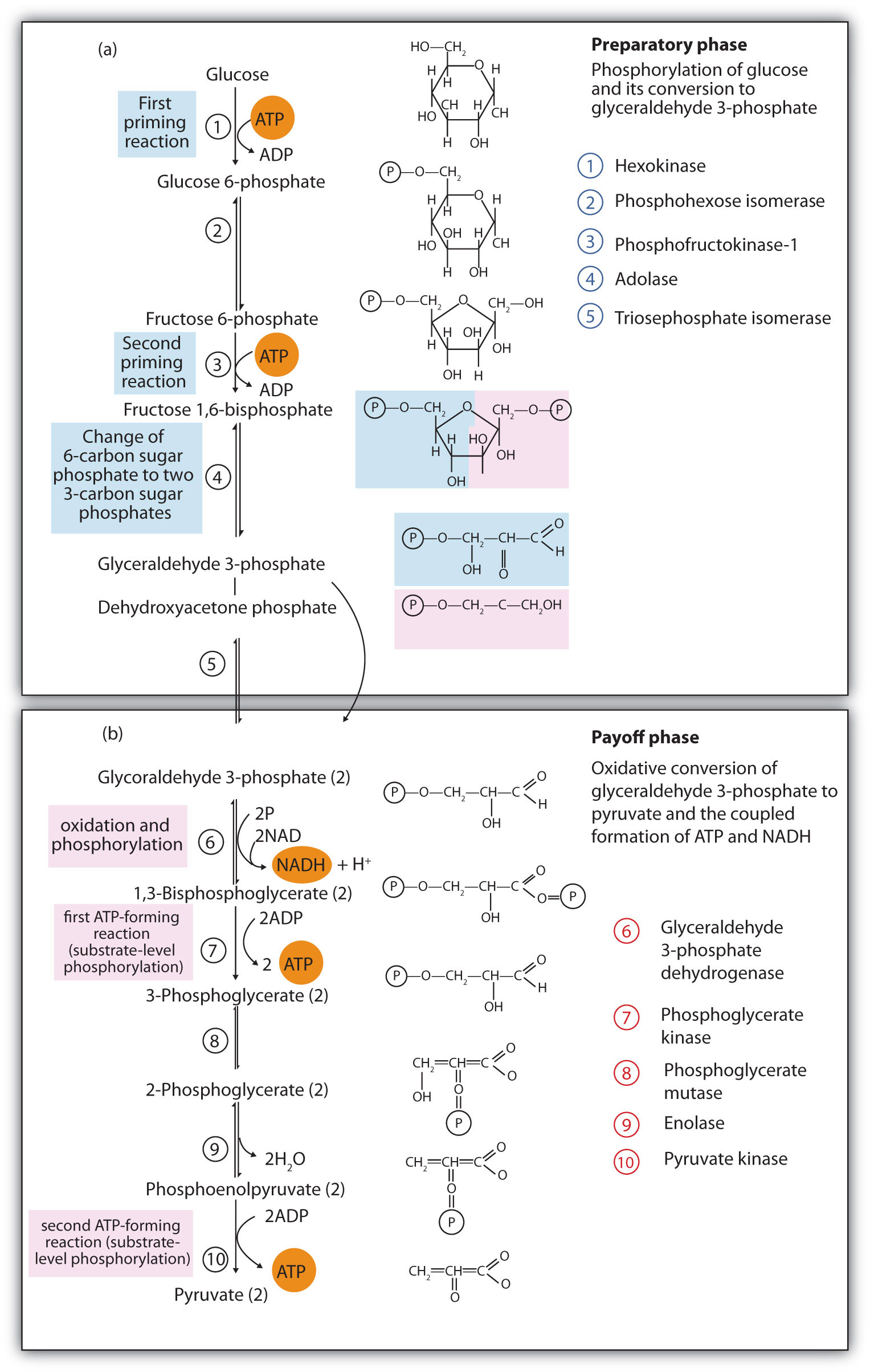 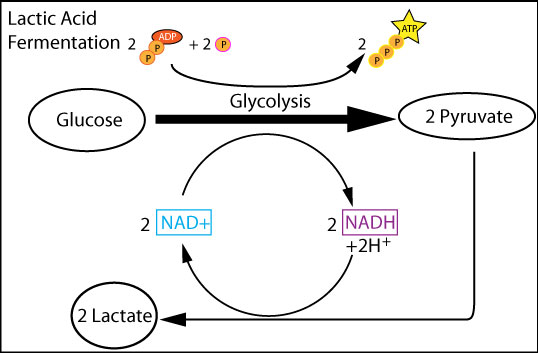 The storage of H+ with pyruvate represents a temporary "collector" of the end product of anaerobic glycolysis. Once lactate is formed it diffuses away into the interstitial space and blood for buffering and removal.

However, this avenue for energy is temporary. Blood lactate and muscle lactate levels increase and ATP regeneration fails to keep pace with the rate of use. Fatigue sets in and performance diminishes.

So these slides will have to do for now (best I have available to post). Put very simply in anaerobic conditions - there comes a point where there is not enough NAD+ available to convert pyruvate to lactate. 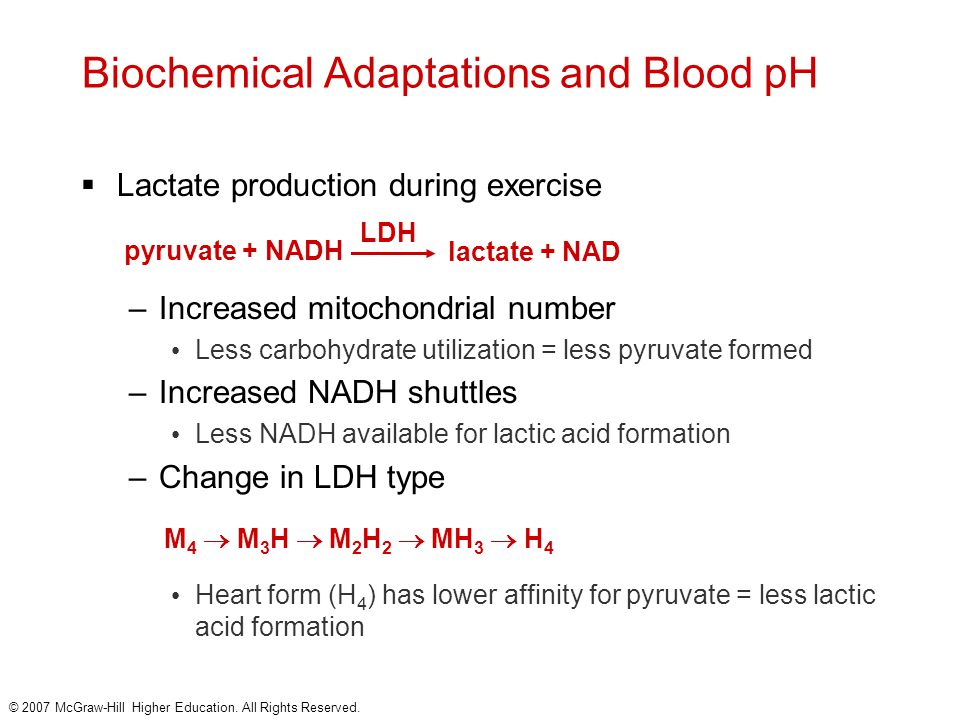 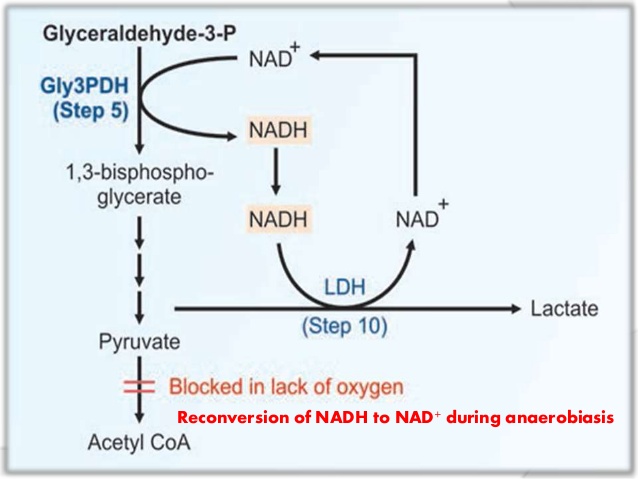 Not the answer you're looking for? Browse other questions tagged metabolism energy physiology or ask your own question.

3
How does heart beat faster while doing a strenuous task?

4
Consumption of NAD+ in glycolysis
3
How is the rate of gluconeogenesis controlled in the cell?
1
What is the fate of NADH produced in the liver during oxidation of lactic acid?
2
Does Glycolysis produce lactate, or pyruvate?
5
What chemical conversions are involved , and what's the name for the process, when the muscles use lactate as an energy source?
6
Pyruvate dehydrogenase: Apparently anomalous NAD/FAD redox reaction
4
Why is fructolysis independent of glycolysis?