Reason for conversion of glucose to fructose in glycolysis

Why is this? Perhaps it makes it less stable so it is easier to break down into pyruvate?

That is just a guess, is anyone able to provide more information about this?

Avoiding diffusion is one reason to phosphorylate glucose, the other is that it is removed from the osmotic balance between inside and outside of the membrane, so it can be transported at a high rate.

The Glucose-6-phosphate can then be used as a substrate for different pathways, namely glycolysis and the pentose phosphate way, and (depending on the organism) also be converted into glycogen and starch for further storage.

The reason for the phosphorylation lies further downstream in glycolysis: The isomerization by the glucose phosphate isomerase and the subsequent second phosphorylation into Fructose-1,6-biphosphate make the conversion and dedication of the molecule into the glycolysis irreversible.

Fructose-1,6-biphosphate is then cleaved by the aldolase into two C3-units: Dihydroxyacetone phosphate (DHAP) and Glyceraldehyde 3-phosphate (GA-3-P). GA-3-P is converted into DHAP, so that downstream only one metabolite needs to be processed.

If there is no glucose there is no need for glycolysis: I deduce from this truism that – at some early stage in the evolution of metabolism – a pathway resembling gluconeogenesis must have arisen before glycolysis. This is just another way of stating the obvious fact that autotrophy must have preceded heterotrophy.

If the aldolase reaction for triose → hexose evolved around glyceraldehyde 3-phosphate/dihydroxyacetone phosphate then perhaps the involvement of fructose 1,6-bisphosphate was dictated by the underlying chemistry of the aldolase condensation, and the steps to glucose followed from there. Note that the main carbon fixation pathway in photoautotrophs does indeed use this process: carbon fixation by RuBisCO generates 3-phosphoglycerate and the subsequent action of triosephosphate isomerase and aldolase generates fructose 1,6-bisphosphate.

So, my main point is that seeking the underlying design principles in the glycolytic pathway may be futile: glycolysis represents the catabolic use of a sequence of reactions that originally evolved for the purpose of anabolism.

Disclaimer: I have probably read this idea somewhere but I have no recollection of where. If anyone can point to an authoritative version of this please do so.

The pathway of glycolysis starts a hexose (glucose), but at a certain point — the aldolase reaction — two molecules of a triose are generated, then interconverted to the same triose, after which the pathway continues to pyruvate, generating net ATP. These triose molecules each carry a phosphate, which, as the poster mentions, prevents them diffusing through the cell membrane, so the hexose precursor needs to carry two phosphates. Thus the question “why is fructose formed?” can be restated as:

The chemical structure of glucose is not suitable to form a bis-phosphate compound that can yield interconvertable triose phosphates in the biochemical reactions the cell employs.

First consider the linear and cyclized structures of relevant phosphate derivatives of glucose and fructose: 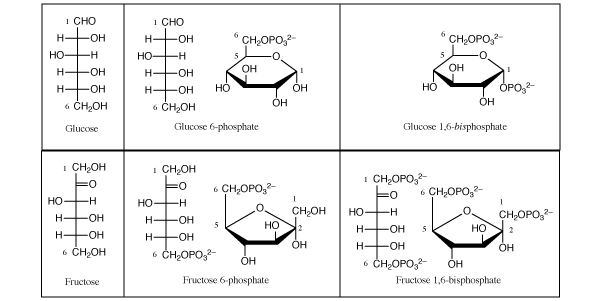 Now let us turn to the triose–hexose interconversion, which is necessary for both glycolysis and gluconeogenesis, which ever originated first. This has two requirements:

Requirement 1 is satisfied most easily in biological systems by an aldol condensation such as the aldolase reaction (also found in the Calvin cycle) in which the nucleophilic carbon of an enolate attacks the carbon of an aldehyde.

Requirement 2 can be satisfied by the isomerization of an aldehyde (like glyceraldehyde 3-phosphate) to a ketone (like dihydroxyacetone phosphate).

The fact that a ketone like dihydroxyacetone phosphate has the potential to form an enolate (shown above) explains the particular suitability of these trioses in relation to the aldose reaction:

So it is not just the symmetry of fructose (noted by the poster in a comment) that is important — but the structure of glucose itself. Glucose 1,6-bis phosphate is not, of course, the only sugar that can become ‘locked’ in its cyclic form. For example, the deoxy-ribose rings in the backbone of DNA cannot linearize because the bases are attached to the C1ʹ where the aldehydic group was originally.

Not the answer you're looking for? Browse other questions tagged metabolism glucose energy-metabolism or ask your own question.

1
What is the use of futile reaction cycling such as Fruc-P to Fruc-BP?
5
How are non-glucose sugars metabolized in the body?
3
Conversion and storage of glucose to glycogen
4
Cellular Respiration/Fermentation Problem Leading to Lack of Energy
3
Where do the four ADPs come from in the second stage of glycolysis?
2
Does Glycolysis produce lactate, or pyruvate?
1
Glucose Carrier Proteins in Cell Membranes
2
What happens to glucose taken up by the liver in type 1 diabetes?
4
Why is fructolysis independent of glycolysis?