A recent1 AncestryDNA commercial highlights a customer who discovered that she was 26% Native American. 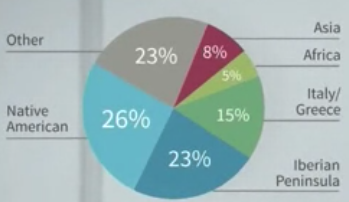 You can see the full commercial here.

My question is, how can this be?

What combination of parents' race lineage would dictate that a person is 26% Native American (or any other race for that matter), and how many generations back would one have to go to achieve these numbers?

1. Recent to me, I don't watch much television.

These tests don't actually tell your ancestry, there is no way for a genetic test to do that because there is too much genetic variation among populations, as well as between.

Wikipedia has a section on this:

Many companies offer a percentage breakdown by ethnicity or region. Generally the world is specified into about 20-25 regions, and the approximate percentage of DNA inherited from each is stated. This is usually done by comparing the frequency of each Autosomal DNA marker tested to many population groups.[2] The reliability of this type of test is dependent on comparative population size, the number of markers tested, the ancestry informative value of the SNPs tested, and the degree of admixture in the person tested. Earlier ethnicity estimates were often wildly inaccurate, but their accuracies have since improved greatly. Usually the results at the continental level are accurate, but more specific assertions of the test may turn out to be incorrect. For example, Europeans often receive an exaggerated proportion of Scandinavian.[10] Testing companies will often regularly update their ethnicity estimate, changing an individual's ethnicity estimate.

In summary: ethnicity testing is at best to satisfy a curiosity. There is no way that genetic testing can identify your geneology perfectly, and in fact it is pretty meaningless to do so, because interbreeding between geographically distinct populations happens all the time.

Not the answer you're looking for? Browse other questions tagged evolution human-genetics human-evolution snp or ask your own question.

0
What percentage of a Neanderthal's DNA could be in a Denisovan?
3
Concept and analysis of Pedigree
0
Analysis over single chromosome data
1
SNP coding for association analysis
1
DNA Inheritance- Math vs. Biology
1
Chromosome position mismatch for SNPs in dna tests