What is the first recorded unambiguous case of childhood cancer? [closed]

Osteosarcoma is mostly a disease of teenagers and it leaves characteristic changes in the bone. Sometimes archaeologists find such bones.

Malignant primary bone tumours were very rare in antiquity and continue to be rare in modern populations. The earliest known case affected a male Celt (about 800–600 BC) who was about 15 years old and lived in what is now Switzerland.1 The lesion is a neoformed bone mass at the level of the metaphysis of the humerus, whose gross pathology and radiographic aspect are consistent with a possible osteosarcoma or chondrosarcoma. A few additional cases of malignant primary bone tumours have been mentioned in literature. A possible osteosarcoma of the pelvis has been reported in a young individual from Ancient Egypt, dating to about 250 AD,92 and a well-documented case of osteosarcoma, with the typical radiographic “sunburst” pattern, has been observed in the femur of a native Peruvian dating to 800 BP (Fig. 4).93 Possible additional cases of osteosarcoma have been reported in a young female femur from the prehistoric population of Oahu in Hawaii,94 in a zygomatic bone from the French Middle Ages,95 in a 17th century mandible from West Virginia,96 in a young male from the Saxon necropolis of Standlake, England97 and in medieval skulls from the Czech Republic98 and France.99

But if you want "described" meaning a contemporary of the child wrote down what he saw, I found this by John Abernathy in 1804. 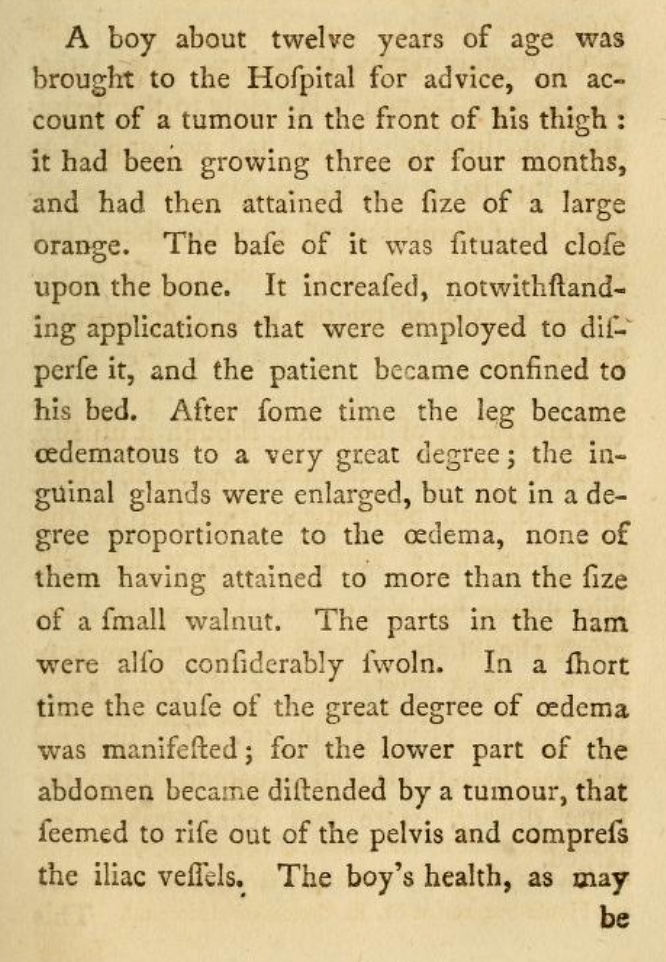 from https://archive.org/details/surgicalobservat1804aber Surgical observations : containing a classification of tumours, with cases to illustrate the history of each species : an account of diseases which strikingly resemble the venereal disease : and various cases illustrative of different surgical subjects by Abernethy, John, 1764-1831

Percival Pott was an English surgeon who is remembered for his realization that the job of chimney sweeping puts men at risk for development of scrotal cancer. Mostly these were grown men but among cases described was an 8 year old; this in 1808. https://www.ncbi.nlm.nih.gov/pmc/articles/PMC1037746/?page=3

He describes the work of Theophilus Boneti, whom in 1700 published a book of many hundreds of case reports accumulated from the previous 150 years. Included was a case of retinoblastoma (I could not tell what year it was from):

In the fourth case, the patient was a 5-year-old girl who presented with a fungous (soft) tumor of the right eye. After a short period of observation, a similar tumor was detected in the left eye. Both tumors invaded the meninges with adhesion to the brain. Boneti did not say so, but this youngster must have had bilateral retinoblastoma.

That puts the earliest solid description of a cancer in a child at 1700.

0
How Common are Paraneoplastic Syndromes in Cancer Patients?
1
Is the Andraka pancreatic cancer test real?
2
Cancer cure statistics questions
0
How does cancer of the larynx (laryngeal cancer) affect the respiratory system?
3
Does an increase in cancer cell traction forces increase metastasis of the cancer cells?
1
How do I find samples/patients in TCGA (the cancer genome atlas) that had radiation therapy?
1
Are there foods which not only prevent but help fighting cancer?
3
What is the precise mechanism by which exercise reduces chance of cancer?