How does coconut form?

I've seen that at the earlier stage coconut is filed with water and, as time passes, the water inside the coconut escapes and a thick layer of white substance forms.

Is the water converted into that white substance?

There is no water escaping from the coconut seed. The transformation of coconut water into coconut meat is explained by the development of the endosperm.

What happens is that, after the (double) fertilization, the endosperm of the coconut forms by nuclear division without cellular division, that is, without the formation of cell walls. This is called nuclear endosperm. According to the Wikipedia link above:

So, in an oversimplification, think about the coconut water as the cytoplasm of a single, huge cell, full of hundreds of nuclei.

After some time, cell walls surrounding the nuclei start to form. This is what we call cellular endosperm. According to the same link:

Therefore, in the coconut, the endosperm is initially nuclear (coconut water) and, after some time, becomes cellular (coconut meat).

Cellular endosperm development becomes visible in nuts about 6 months old, at which stage a thin coating of jelly-like endosperm tissue is seen around the periphery of the large embryo-sac cavity.

This image shows those two tipes of endosperm (and helobial endosperm as well): 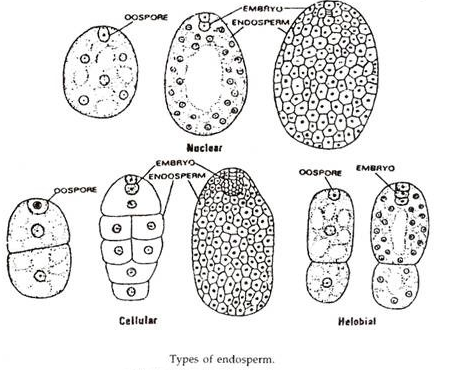 Not the answer you're looking for? Browse other questions tagged botany seeds or ask your own question.

0
Distribution of nutrients throuought a drink made of plants?
4
How does boiling water revive cut flowers?
9
How does coconut water solidify into hardened coconut meat?
2
What is the name of the plant with the down-falling light purple leaves?
5
Wax layer destruction from seed coats
18
Why do pink rain lilies flower only after rains, and not from being watered?
8
What fruit did I just accidentally buy?
4
Why does the seed of the coconut tree have a liquid in it?