Why don't Australian magpies in Tasmania swoop at people?

I'm currently living in Tasmania (Australia) and I have noticed that Magpies don't swoop at you here, yet they do in other parts of the country.

Just wondering: does anyone know why?

I cannot give you a proved explanation of why magpies don't swoop in Tasmania. Nevertheless, my goal here is corroborating your impression with some data, and indicating a possible cause.

Australian magpies are not the same species of European magpies (Pica pica). Actually, they are not even corvids. They belong to the Family Artamidae, and their scientific name is Gymnorhina tibicen (synonym: Cracticus tibicen). Here is a male magpie (you can tell he's a male by the white colour in his back): 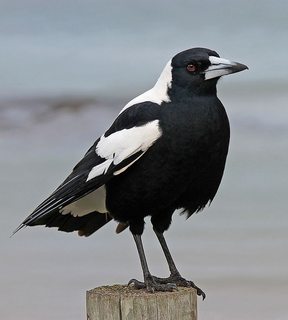 Magpies are territorial birds and in the breeding season (which is right now, as I write this, in September) a small percentage of the males become quite aggressive towards people approaching the nest.

According to the Wikipedia link above:

These magpies may engage in an escalating series of behaviours to drive off intruders. Least threatening are alarm calls and distant swoops, where birds fly within several metres from behind and perch nearby. Next in intensity are close swoops, where a magpie will swoop in from behind or the side and audibly "snap" their beaks or even peck or bite at the face, neck, ears or eyes. More rarely, a bird may dive-bomb and strike the intruder's (usually a cyclist's) head with its chest. 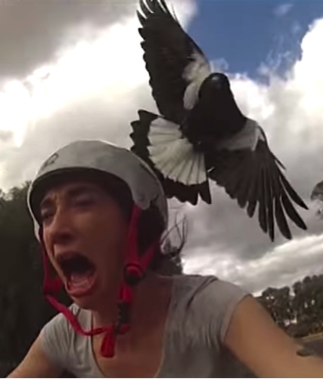 As a personal and anecdotal note, I have to say that I bike during the breeding season and I was never attacked by a magpie, nor I've ever seen a magpie swooping.

No swooping in Tasmania

Your claim sounded quite incorrect to me when I first read your question. After all, the magpies in Tassie (short for Tasmania) and the magpies in the mainland belong to the same species (G. tibicen).

However, after some research, your claim seems to be correct: there is very few, if any, report of magpies swooping in Tassie.

For instance, this is a chart from the Magpie Alert website: 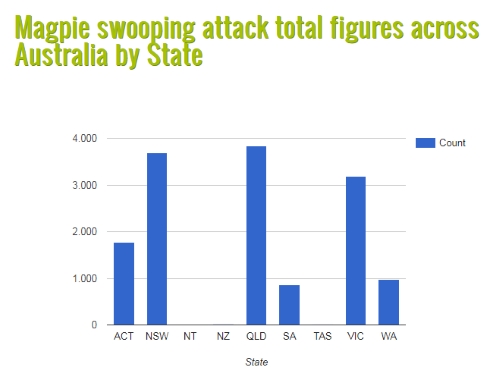 And here is a map of the attacks (the online version is here): 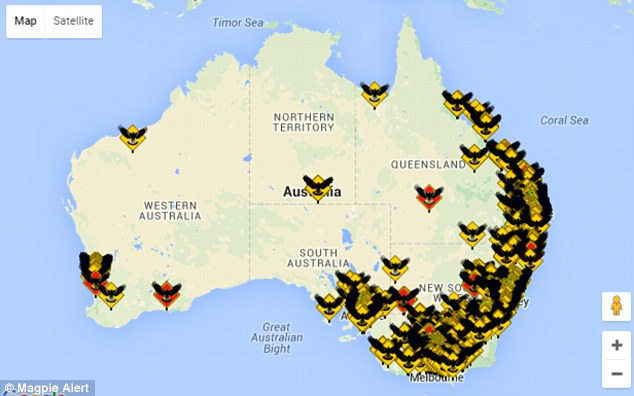 Most of the attacks happen in Victoria and New South Wales. However, besides Tasmania, you can see both in the chart and in the map that there is no attack registered in Northern Territory (NT) and New Zealand (NZ) as well.

That data doesn't prove that there is no swooping in Tasmania, but it does show that, somehow, Tasmanian magpies behave differently. Maybe they are more shy, or maybe the males over there perform other behaviours to drive off intruders before swooping. It's also possible that the explanation is completely different: maybe people in Tasmania don't like to go online and complain about magpies.

The Tasmanian magpie (G. tibicen hypoleuca) is the smallest magpies of all in Australia. Besides that, it is the magpie that forms the largest groups (Kaplan, 2004), with as many as 15 individuals. 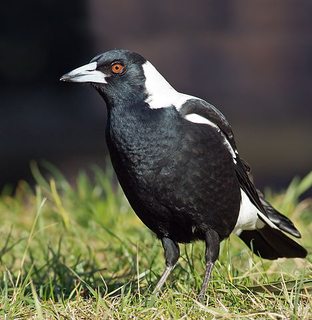 Coincidentally, magpies form smallest groups exactly in the areas of higher incidence of swooping, like Victoria and New South Wales. The possible correlation among those variables (swooping rate, body size and group size) is something that is still to be investigated.

However, regardless the actual explanation, the fact is that the number of registered attacks in Tassie is, indeed, smaller than in the mainland. After doing a lot of research, the explanation for this remains unknown to me. Let's wait for more answers.

PS: as I said in my comment, magpies are not that aggressive: they are very nice birds and very intelligent ones as well. So, one way to avoid attacks from the magpies in your area is becoming friends with them: magpies have a good memory and they can recognise a face after years. So, if you become friends with your local magpies, they probably won't attack you if you get closer to the nest. By the way, the best way to making new friends is with food (that works with humans too).

As someone who moved from WA to Tasmania 18 years ago, I discovered the Tasmanian magpies to be much more wary of humans that others I have met. They very much kept their distance for many years. Traditionally many Tasmanians have an old fashioned approach to nature. In previous years I suspect a swooping magpie would simply have been shot and the birds have learned to keep away from us. On the mainland you have large cities, with many parks and open areas. Ideal for magpies and full of humans. You also have lot's of cycleways and people moving about. Tasmania has a lower population, many rural areas and less of the territorial intrusion sort of behaviour that magpies resent. I was working on a Tasmanian university campus and from my office window I often saw the local magpies swooping cyclists. Open areas, strangers moving about, the birds took exception. I was never swooped because I was recognised.

A little late with this response but here goes. My home in Tasmania is a semi rural bush block that is also home to a primary magpie family (3 to 5), and also home to an ever changing peripheral group (upwards of 20) of older juvenile magpies. Although the magpie family make it clear the patch belongs to them, they show their superiority more with irritation, the odd sneaky peck or two, than outright aggression. As long as the other magpies defer to them when they're all in the same vicinity peace reigns.

My theory is the family, who I have a close relationship with, know I wouldn't be happy if they attacked other magpies, so they keep their disdain fairly low key.

They proved this recently when next door's free range chooks were causing a problem. I only had to chase them away for a single day before the 'family' took over and chased them away for me. But, even then, non contact swooping was applied.

Tasmania is filled with low key people who have time to take the time...just a guess, but perhaps this friendship factor is the key to the lack of magpie swooping in the state. Or, more likely, Tasmanian magpies have simply evolved to be a less aggressive breed.

I have been a cyclist in Tasmania for decades and until recently had never been swooped by a magpie. In November 2020 I rode the "Tassie Gift" bike-packing event and was swooped and chased at Caveside on my way to Mole Creek. There were multiple aggressive birds over about a 10km stretch and I was hit on the helmet twice as I tried to outrun them. Then again a few days later on the trip on my way towards Cressy I was attacked again. They seemed very angry and followed and swooped for a long distance.

So unfortunately I can confirm that they do indeed swoop in Tassie but only in certain places.

They have not swooped me yet on my home trails around Launceston. But sometimes I can see them looking at me intensely and I wonder if they are thinking about it.

I hope they are not all starting to learn this dangerous and disturbing behavior.

A few hours after the second attack I saw one flat on the road that had been squashed by a car. Oh what joy and mirth that bought me, cop that you f^%ker may many of your mates meet a similar fate.

Not the answer you're looking for? Browse other questions tagged ornithology ethology behaviour or ask your own question.

2
Is there an instinct-driven body language for birds?
2
Are gizzard muscles voluntary or involuntary?
1
Do non-migratory canada geese still exhibit migration behaviors?
12
Where do birds and squirrels go to die?
5
Help identifying this bird from Southern Brazil
2
Is feeding birds only after a snowstorm helpful or harmful?
3
What are the various types of plugs found in a bee house and how do they help us with identification?
1
Why are these nesting magpies building another nest