Which extinct creatures were most genetically distant from everything alive today? [closed]

Extinction in the deep past has cut off some evolutionary branches. Which extinct creatures (including all living organisms) were most genetically distinct (alien) from living creatures today?

I vote for the Edicaran fauna. 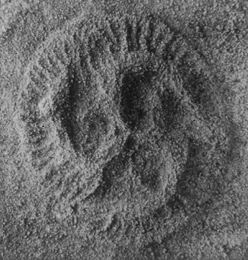 Most macroscopic fossils are morphologically distinct from later life-forms: they resemble discs, tubes, mud-filled bags or quilted mattresses. Due to the difficulty of deducing evolutionary relationships among these organisms, some palaeontologists have suggested that these represent completely extinct lineages that do not resemble any living organism. One palaeontologist proposed a separate kingdom level category Vendozoa (now renamed Vendobionta)[8] in the Linnaean hierarchy for the Ediacaran biota. If these enigmatic organisms left no descendants, their strange forms might be seen as a "failed experiment" in multicellular life, with later multicellular life evolving independently from unrelated single-celled organisms.[9]

No-one can say what the DNA of the Edicaran organisms were, or whether they were related to what came after. Apparently these fossils do not resemble the fossils of the subsequent Cambrian or much of anything else. The triskelion fossil I put in here looked the coolest to me. If they were a "failed experiment" or some sort of false start on multicellular life, they might have been totally alien.

The very first ones to go extinct would be the most genetically distant; at that distance, the issue becomes more "how do you define life?" or "how do you define a species?" to get the actual most distant. Overall, it sounds like an interesting question, but it really isn't: extinction isn't special, it's the norm. There are most certainly extinct organisms or pre-organisms of some level of development that never contributed to the existing life on earth and have no descendants or relatives.

4
The Perplexing Trilobite: What is the Evidence Supporting The Hypothesis That They are Not Crustaceans?