Is there evidence that dendritic spike generating ion channels are distributed unevenly on the dendritic tree, with higher density near the branching points of the tree than along the unbranched segments? Or the other way around? Or is there no observed correlation between density and local geometry of the tree?

If there is, i.e. if those channels tend to condense near branching points: which mechanism drives them to do so?

[I believe it could make sense to have the spike generating channels condensed at branching points: there they could act as local logical gates, summing up the inputs of the afferent branches (see Poirazi et al, Pyramidal Neuron as Two-Layer Neural Network).]

[There is also a figure in Larkums article on A cellular mechanism for cortical associations in which at least one electrode is placed close to a branching point. Maybe because there are extraordinarily many spike generating channels?] 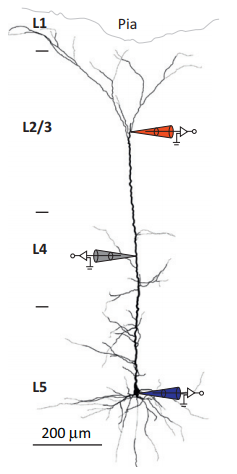 Browse other questions tagged neuroscience neurophysiology or ask your own question.

6
How do membrane proteins find their target locations?