Species of dinosaur with longest fossile record (no birds!)

There were many species of dinosaurs and many got extinct long before the whole clade disappeared. I am wondering which species has shown the longest fossile record. Since birds descend from dinosaurs, I excluded that case to preclude the easy answer! I fully understand the vagueness of my question, stemming from the uncertainties associated with the definition of species but I would think that at least some ballpark could be estimated?

Dinosaur biostratigraphy makes it not possible to answer your question through all of history. 8Ma is the highest longevity species I found in a biostratigraphy table. Dinosaurs are faster evolving than crocodilians who have 1/3rd as big a genome as a mouse and 1/6th that of a shark. Adaptive genus existed for 5-30 million years, and well known clades exist for 20-500 Ma. 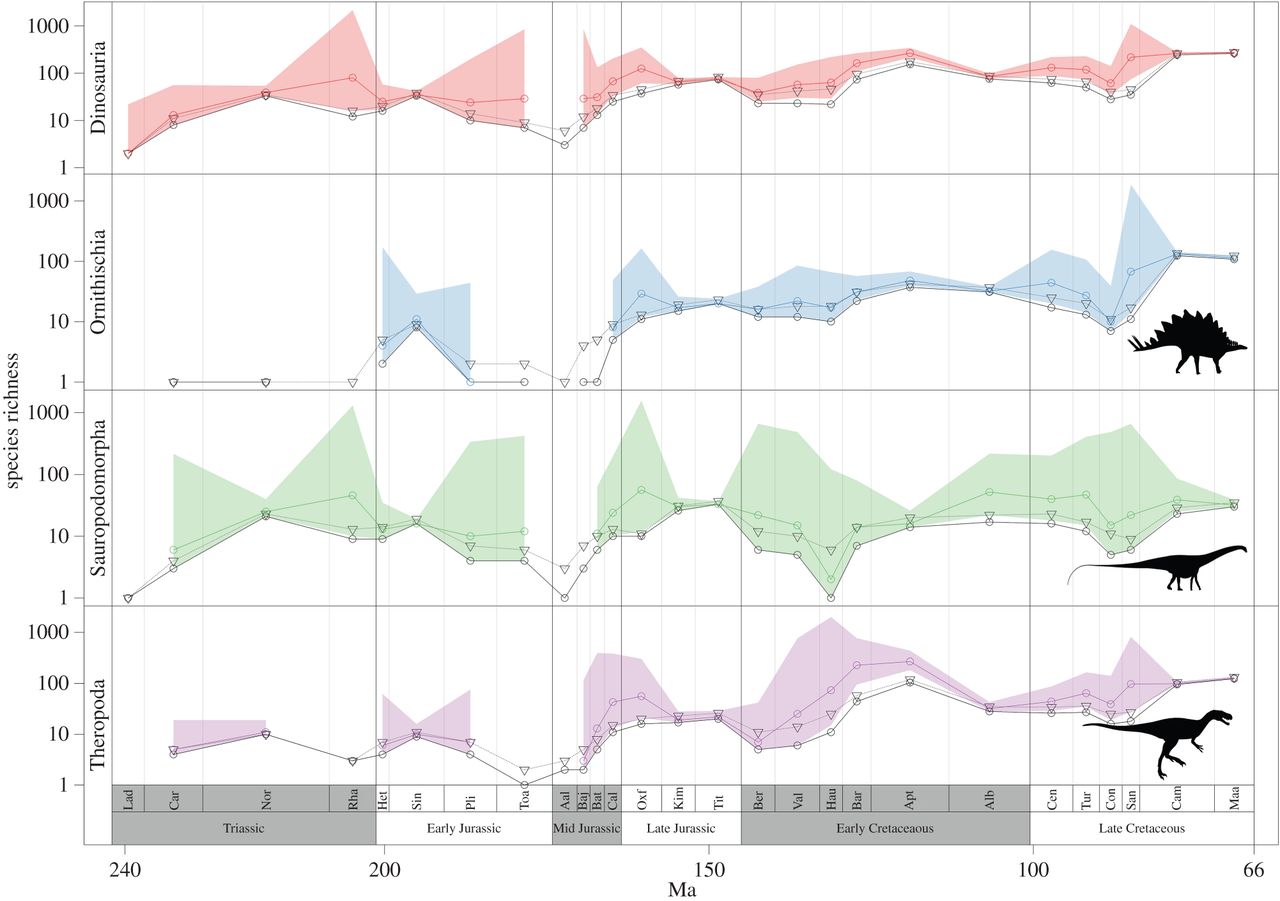 The most complete geological formations often only cover small spans of history. Generally you will find that paleontologists have few species, and more often groups and genus represented by 10-20 species fragments.

The Hell Creek Formation covers 2 million years of history, and has revealed 400 species, of turtles, dinosaurs, metatherians, mammals, turtles, and a very rich image of life at that time, and 90 percent of the geological time scale is represented by only a fragments of fossils.

So, you won't find a good answer for species, perhaps the best way to find out the longest lived genus (i.e. like a dragonfly, all species are in the same family) is by doing some google tricks:

For genus i can find this:

Animals with small genotypes Crocodiles and turtles evolve very slowly, and it gives you an idea of evolution speeds prior to the arrival of mammals, who seem can adapt faster than all previous larte animals.

2
Name of dominant dinosaur
3
Any simulations of four-winged dinosaur flight? (microraptors)
20
How did the largest/longest dinosaurs hold their head and necks up?
2
Can you see the coloration of Sinosauropteryx with the naked eye?
6
Has the most recent common ancestor of all living birds lived after dinosaur mass extinction?
3
How can paleontologists identify morphologically different fossils as members of the same species?
0
What species is most prolific?
3
Is this a real dinosaur species?
3
Why are there few tetrapod dinosaur carnivores?