Why does chromosome inversion happen?

I read that chromosome inversion is a type of genetic mutation.

In addition, there are two types of inversions: paracentric and pericentric. The difference between these two inversions is that one of them invovles centromere and the other one does not.

I apologize if my questions are vague. I do not have much background information on chromosomes.

Like many other mutations, inversion is generally a neutral mutation. Many inversions, especially those which are between small, intergenic regions, evolve neutrally by drift alone. However, selection can, and does, occur when:

Thus, inversion does not necessarily yield any advantage, but it usually does not cause any harm either (Kirkpatrick, 2010).

No mutation is useful or harmful by default. It depends on what effect it gives in every case. Similar is the case with chromosome inversion. It is mostly a nuetral mutation, occasionally harmful, and rarely useful for the individual. Thus, in a way, it can be classified as a neutral mutation.

The main point to ponder is how the two types of inversion affect daughter cells, especially during meiosis. For introduction, in a paracentric inversion, the centromere is not involved, while it is in pericentric inversion.

Now consider paracentric inversion during meiosis. Start with a diagram: 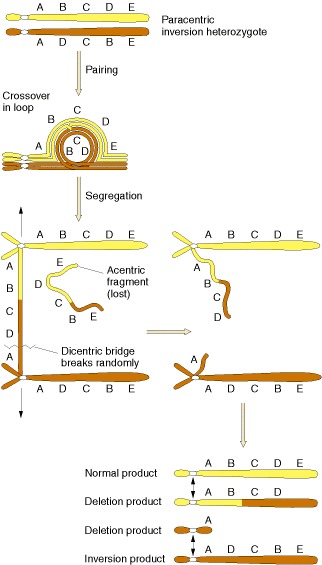 Due to a paracentric inversion during a crossover, formation of a dicentric bridge and an acentric fragment takes place. While the acentric fragment, due to lack of a centromere, is lost from the genome, the dicentric bridge forms such structure that the two remaining chromatins lie farthest apart. Eventually, due to tension, the homologous chromosomes break apart, leading to formation of chromosomes lacking certain genes. This makes the gamete and/or the zygote inviable, and reduces the recombination frequency.

Now, while very similar thing happens in pericentric inversion, the mechanism is a bit different. Again, see the diagram first: 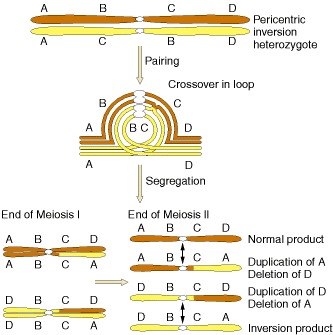 Since the centromere is also involved in inversion, the genes on both arms of chromosomes are, as a result, inverted. When crossover takes place, both homologous chromosomes receive two copies of one fragment and no copies of the other. As a result, again, the gamete and/or zygote is inviable and the recombinant frequency is reduced (Griffiths et al, 2000).

Just like all other mutations, chromosome inversion can occur at any stage of life in an individual. It is not limited to meiosis, it can occur in any replicating cell in the body. However, the phenotypic effects are most prevelant when it occurs during meiosis, since it can easily lead to defected or inviable progeny.

Not the answer you're looking for? Browse other questions tagged genetics biochemistry mutations chromosome crossover or ask your own question.

5
Chromosome 2 fusion?
1
When does a chromatid become a chromosome?
3
Mechanics of Chromosomal Crossover
3
Cousin Marriage from genetics point of view
1
Correlation between genetic distance and birth defects
1
What is the difference between these two depictions of chromosome?
7
Why does DNA mutate?
3
Human ancestor reproduction after chromosome fusion
1
Is it possible for a sex chromosome to be homologous?