By definition, are mutations required to be natural, or are synthetic lab-induced genetic changes considered mutations too? Furthermore, are genetically manipulated organisms (GMOs) considered forced mutants?

What is a mutation?

A mutation is any change to the DNA sequence. From wikipedia

In biology, a mutation is the permanent alteration of the nucleotide sequence of the genome of an organism, virus, or extrachromosomal DNA or other genetic elements.

Whether a given alteration to the DNA sequence occurred in nature or in a lab changes nothing to the fact that we call this alteration a mutation.

How common are mutations?

Just so that you realize how common mutations are: In humans, a couple having a baby typically transmit about 40 new mutations to this baby. This mutation rate is not quite the same between women and men (see Kong et al.(2012)).

What is a GMO?

I have never seen the term "forced mutants" before but it sounds like you might have a misrepresentation of what GMOs are and esp. in your misrepresentation, you might think that there is such natural category which are GMOs and other that are non GMOs but the boundaries between the two is more than vague.

Consider for example that the vast majority of our food has been manipulated by humans through artificial selection. Check out the ancestor of modern-day corn (from Genetic Society of America; original source: teosinte.wisc.edu; thanks @John) 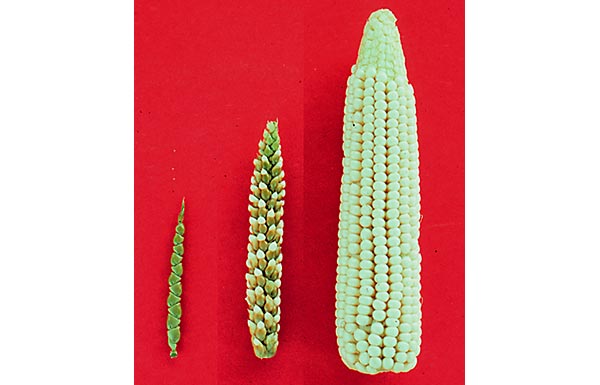 A gene mutation is a permanent alteration in the DNA sequence that makes up a gene, such that the sequence differs from what is found in most people. Mutations range in size; they can affect anywhere from a single DNA building block (base pair) to a large segment of a chromosome that includes multiple genes.

So both naturally occurring, and lab-induced modifications could be considered mutations.

I've never come across the term "forced mutants", but for perspective, a GMO can be created by purposefully exposing the organism to radiation in a controlled manner. In the wild, it is possible that organisms are thusly exposed as well, but in an uncontrolled manner.

For further reading, see this article.

This really is semantics.

The two pictures in my mind are very different, but tend to be related to the extent and complexity of the changes rather than whether they occur in the environment or are produced in the laboratory.

In plain English mutation just means change, but in molecular genetics one thinks of small-scale changes: base changes, additions or deletions of a base or a short stretch of bases. Those that occur in the environment are random in the general sense, and originally this was also true of those induce in the laboratory through agents such as mutagenic chemicals or ionizing radiation. With advances in recombinant DNA technology the changes could be directed: introduced at particular points in order to produce the desired mutation — site-directed mutagenesis. However the picture is one of small changes, even if they can have major consequences. Certainly the fact that the mutation is directed to produce the desired outcome (presumably what the poster means by ‘forced’ — although this term is not in common use.)

Genetic manipulated organisms (whether bacteria or mammals) often have a completely new gene inserted into them so that they can produce an entirely different protein — something non-functional like a fluorescent protein, or practical utility like insulin or a protein that provides a plant with resistance to pesticides. The organism is certainly changed, but ‘engineered’ would seem more descriptive of the extent of the change and the technology involved than ‘mutated’. (And although one of the other answers suggests there is no difference in principle between directed plant breeding and and such manipulations, this seems a little ingenuous to me. There is no way you could breed corn so that it expressed the green fluorescent protein from jellyfish.)

My apparently subjective remarks on genetic manipulated organisms and the non-use (or less frequent use) of the term ‘mutation’ is supported by the abstracts you find on googling for GMOs. I cite the first four below:

A genetically modified organism, or GMO, is an organism that has had its DNA altered or modified in some way through genetic engineering.

A genetically modified organism (GMO) is any organism whose genetic material has been altered using genetic engineering techniques (i.e., a genetically engineered organism).

Agricultural plants are one of the most frequently cited examples of genetically modified organisms (GMOs). Some benefits of genetic engineering in agriculture ...

Genetically modified organisms (GMOs) are living organisms whose genetic material has been artificially manipulated in a laboratory through genetic engineering.

Not the answer you're looking for? Browse other questions tagged genetics mutations or ask your own question.

12
Have any mutations or genetic loci been associated with exceptional longevity in humans?
2
Evolution after the development of sexual reproduction
8
Difference between mutation and DNA damage
6
Can DNA & RNA be considered as nature's programming language?
8
Is Mutation Theory still “valid” for complex organisms?
0
A trivial question on the meaning of “relatives” in an article on horizontal gene transfer
3
Have humans finished evolving?
2
What's the difference between mutation and substitution rates?
0
Is natural selection actually random?