Does exhalation help us speak, and if so, how?

Everyone knows that we breathe in oxygen and breathe out carbon dioxide. That's how the respiratory system works. But we also use the respiratory system to produce sound and language. When we speak or emit sound, our glottis opens up, and depending on whether the sound is vocalized, our vocal chords vibrate. We then use articulators (tongue, lips, teeth) to shape the sound we produce.

But what kind of air is emitted in the first place? When our glottis opens up, what kind of air is passing through, and why does it pass through? The most obvious answer, which is my first guess, is that carbon dioxide is passing through our glottis and our trachea, and that we use this to create sound. In this way we would be using the product of respiration for a separate purpose: to create sound and communicate.

This is only a guess. But a logical one. The question, to put it most simply, would be, do we utilize our natural cycle of exhalation to produce sound and speak? Or is something else going on?

It is this exhaled air we use to speak. However, there is a very minimal increase (and I do mean minimal) in the CO2 concentration and decrease in the O2 depending on how fast we speak, how often we stop to take breaths, etc. compared to plain, expired breath. This is because the inhaled air is being held back in the lungs and released more slowly as we speak, giving more time for O2/CO2 exchange to occur. However, it will mostly occur in what's called "dead space" and the %CO2 will be changed for a few breaths thereafter as well.

To demonstrate this, speaking until we're "out of air" should make us slightly dizzy because maximal exchange will have taken place at a certain point, after which our blood CO2% will rise, and our blood O2% will fall.

After that, the higher serum CO2 will cause us to take a deeper breath, a 'cleansing breath' if you will, to jump start the return to normalcy in blood gasses. It is very, very hard to resist this deep breath (which is why breathing has a voluntary and an involuntary component, i.e. you can't hold your breath until you die.)

If an average of 5% of your expired gas changes from 1.45 grams per liter to 1.95 g/L as it goes from O2 to CO2, the total change of mass of expired air is about 1.5 percent. That's countered by warm air which expands so it becomes lighter.

So the fluid physics of the expired air doesn't make a marked octave difference compared to raising the vocal chords.

Another physics thing is that dry air is lighter than moist air.

Oxygen absorption has no major role to play in sound generation, as Nitrogen constitutes 78% of the volume.

why does it pass through? Exhalation contributes to control the volume of the sound output. Air pressure is necessary to cause the vocal chords to vibrate as taught chords that can oscillate continuously when displaced by a constant flow of air.

Quite complex muscle actions of the thorax, rib cage, diaphragm, and abdomen occur during utterances, here are some measurements.

The vocal chords are also known as vocal folds. They narrow during sound production, and are open during respiration. They narrow very thin and vibrate as a direct cause of exhalation. There is a video of vocal folds vibrating, and you can see them vibrate. https://en.wikibooks.org/wiki/Acoustics/Human_Vocal_Fold

Above them is an air chamber that guides the sound waves into vowels, like A E I O U.

Other mammals don't have a developed air chamber above their vocal chords, and mostly can make screech sounds rather than vowels, however mammals can drink and breathe at the same time, which humans can't. You can study evolution of the voice box on other threads.

It's the same as with a trumpet, if the guy doesnt breathe outwards, sound is not produced, and stronger breathing changes the sound. 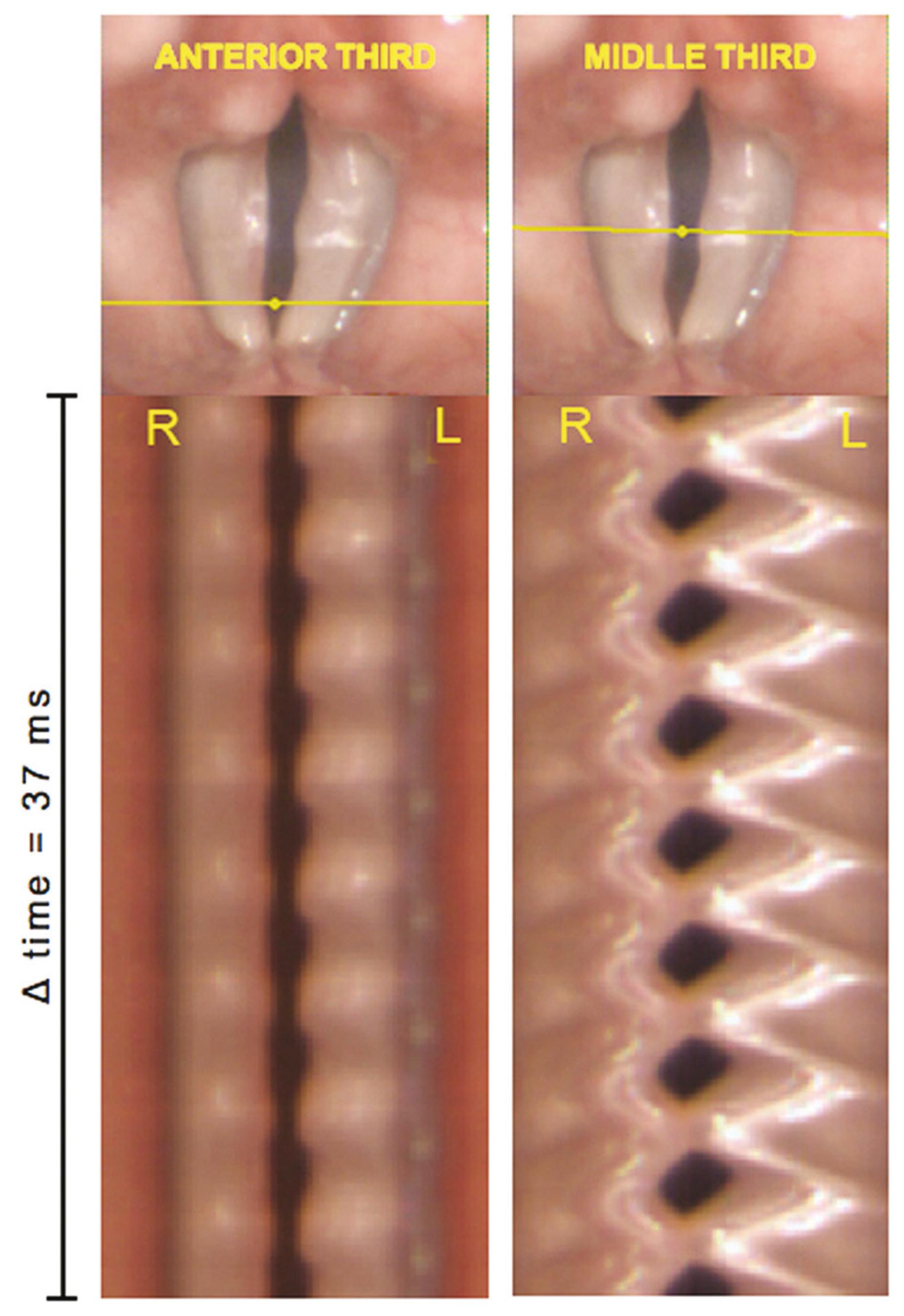 Not the answer you're looking for? Browse other questions tagged respiration language vocal-communication or ask your own question.

7
How much gas is exchanged in one human breath?
1
Breathing in and out
3
How does a metronome help in controlling breathing rate?
3
Why *morning walk*?
2
Cough at 1000 km/h?
3
Does the Valsalva maneuver require a completely closed airway? How do the effects compare to exhalation against partial resistance?
3
What is a deep exhalation/inhalation?
0
Can animals speak like humans?
4
What are the current theories on how baleen whales make whale song?