What is the largest animal that has no hard parts?

Some examples of "hard" animal parts are bones, cartilage, and exoskeletons. What animal has the most mass while being completely "soft". I don't think it's the colossal squid, since it has a hard beak and cartilage in their mantle. My guess is the heaviest jellyfish.

Please forgive me for plagiarizing the open source wikipedia, here are some species of large soft bodied animals. I honestly don't think I could re-write this more clearly for any logical reason:

The lion's mane jellyfish (Cyanea capillata) is the largest cnidaria species, of the class Scyphozoa. The largest known specimen of this giant, found washed up on the shore of Massachusetts Bay in 1870, had a bell diameter of 2.5 m (8.2 ft), a weight of 150 kg (330 lb). The tentacles of this specimens were as long as 37 m (121 ft) and were projected to have a tentacular spread of about 75 m (246 ft) making it one of the longest extant animals 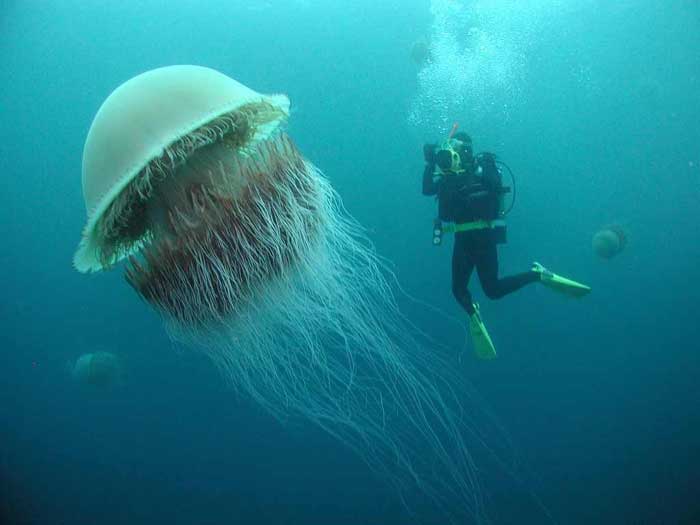 The largest roundworm, Placentonema gigantissima,[174] is a parasite found in the placentas of sperm whales which can reach up to 9 m (30 ft) in length

The largest nemertean is the bootlace worm, Lineus longissimus. A specimen found washed ashore on a beach in St. Andrews, Scotland in 1864 was recorded at a length of 55 m (180 ft).[183]

There are a couple of animals that are of interest but they are not technically soft bodied:

The largest known species of sea sponge is the giant barrel sponge, Xestospongia muta. These massively built sponges can reach 2.4 m (8 ft) in height, 80 kg and can be of about the same number of feet across at the thickest part of the "body". Some of these creatures have been estimated to be over 2,400 years of age.

34
Can any animals photosynthesize?
8
Why do small organisms make faster movements than big organisms?
3
Human bone density and Brown Bear bone density?
13
What animal has the longest juvenile period?
4
What is the largest species of polychaete?