Have we ever observed fertile offspring with a different number of chromosomes than the parents?

Chimpanzees are supposedly the closest relative of humans from a DNA perspective, they are both diploid, and they both undergo meiosis. However, chimpanzees have 24 chromosome pairs while humans have 23.

While it may seem a detail, the difficulty is to know what exactly you mean by observation. Chromosomal abnormalities, gene duplication, chromosomal duplication, robertsonian translocations, whole genome duplication are not super common but common enough to be seen repeatedly. We see them happen again and again in different lineages, we can even investigate how our environment affect such chromosomal abnormalities (Merkatz et al. 1984). So below, I am citing a few papers that I more or less randomly selected among the decently large amount of work on the subject.

There are many genetic disease in humans that are related to such chromosomal duplication (e.g. Down Syndrome) and de novo mutations for these mutations, while rare, are not so rare that we can witness them only on geological time scale (Veltman and Brunner, 2012)

There are soo many articles on the question that I don't really know what to cite. Of course, there are reviews that can be of interest to you (such as Zhang 2003). I tried to find a video showing a meiosis leading to chromosomal duplication but unfortunately, I have failed to find that.

The mechanisms of these mutations leading to chromosomal rearrangements are pretty well understood. You should probably start with wikipedia > gene duplication # Mechanisms of duplication for an intro.

As you talk about the difference between the number of chromosomes in chimpanzee and humans, you might want to have a look at the post Evolutionarily speaking, why do humans have 46 chromosomes where it is explains (with plenty of citations) how did the change in chromosome number occurred in our lineage.

I have read a lot about the idea of evolution

I do not want to seem pedantic but given that the vocabulary that you are using (change in kind, concepts of transfer errors, concept of gradual change) it really suggests that all you read comes from the creationist propaganda and not from the evolution literature. Indeed nobody use these terms in the research. Those terms are mainly used as straw man from the creationist propaganda.

There are many free intro courses to evolutionary biology. You might want to have a look at Understanding Evolution by UC Berkeley.

Another example is Turner's syndrome. Affected women lack an X chromosome and so have 45 chromosomes. Fertility is lower in these women but some can get pregnant and bear children.
Bernard V et al. Spontaneous fertility and pregnancy outcomes amongst 480 women with Turner syndrome. Hum Reprod. 2016 Apr;31(4):782-8.

It may be that some of these persons who have different chromosomal numbers in sampled cell populations (usually blood) but are still fertile are actually [mosaics](https://en.wikipedia.org/wiki/Mosaic_(genetics). These individuals have different populations of cells comprising them. Perhaps the mutation leading to trisomy or monosomy occurred in one cell after the embryo was already comprised of several cells. Cells from that lineage will show the phenotype associated with the mutation but if the germ cells are descended from cells which did not have that mutation, they would be normal and so be associated with normal fertility.

Plants are particularly well know n for this, polyploidy (duplicate sets of chromosomes) are rampart across plants and is often exploited by humans to increase fruit yields. Strawberries for instance vary from 14 to 56 chromosomes and remain cross fertile. In plants they can still be cross fertile however in animals this is has never been seen and all known polyploid animals are believed to be the result of multiple individuals having the same duplication.

Sturgeons, show various degrees of Aneuploidy (different numbers not due to duplication), and it has been studied by crossing sturgeons with different numbers of chromosomes, many of the offspring are fertile.

chromosome fusion has be observed in horses, cows, sheep, lab mice, and fruit flies, and there varying degrees of fertility. Basically the animals that we pay very close attention to the genes of have shown it, meaning it should be relatively common. The university of indiana provides a more complete list.

Insects, many insects are haplodiploidy which means males anf females have vastly different numbers of chromosomes.

Indian Muntjac (see picture) actually have different numbers of chromosomes between males and females, 7 and 6 respectively. they share this trait with wallaby and echidna. 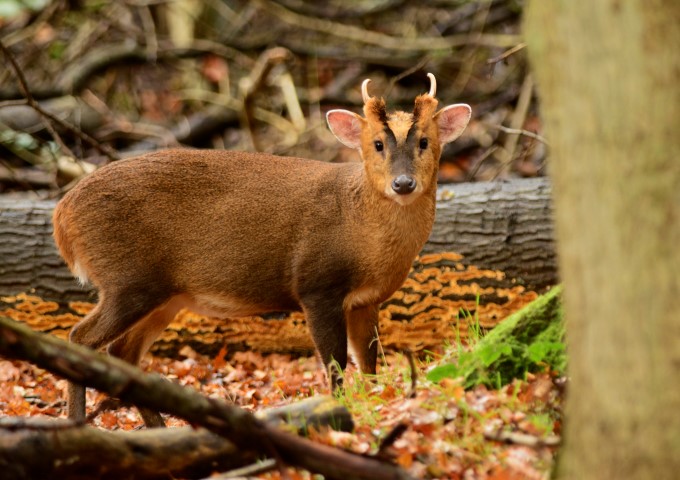 crossbreeding of scarlet macaw with different numbers of chromosomes to reintroduce genetic diversity has been shown to be successful.

The blue butterfly is the all time winner however as the chromosome count varies wildly, without polyploidy no less. They have so many chromosomes 448-452 that the loss or fusion of some just has little effect.

A 44 chromosome human exists, who appears normal, this number is due to chromosome fusion, since he has not bred we don't know about his fertility. As has been mentioned humans can have different numbers of chromosomes and while most or lethal some are not and those with them can remain fertile. changes in chromosomes in particular seem to be the most tolerable biologically.

Not the answer you're looking for? Browse other questions tagged molecular-genetics molecular-evolution or ask your own question.

15
Evolutionarily speaking, why do humans have 46 chromosomes
8
Evolution of Chromosome Numbers
4
How are new chromosomes replicated into the next generation via sexual reproduction?

21
Do animals other than humans have different blood types?
3
Why do genes with closely related functions often reside on different chromosomes?
9
What determines the number of chromosomes an organism carries?
9
Are the number of base pairs in a given chromosome same between different individuals?
1
What exactly does the phrase "chimerical sharing" mean in this abstract?