The second law of thermodynamics and the cell (3 questions)? [closed]

First question: the answer is actually contained within the question. The cell maintains order precisely by discharging heat. The second law of thermodynamics states that the tendency of a closed system is to proceed from ordered to disordered. Since thermal energy is (to our knowledge) the most disorderly form of energy that exists, in any given system where energy is involved, some energy will always be lost to heat.

For instance, if your cell performs the break down of ATP to drive some chemical need of the cell, some of the energy released in the breaking of the bonds in the ATP to form ADP will be lost as heat. This means that the cell's heat is going up on average, and it must export heat to the environment. If the heat was held inside the cell, the cell would rapidly become extremely disordered as proteins de-natured, non-enzymatic reactions sped up, and the cell basically self-destructed.

Second question: I think you've slightly missed something. Autotrophs (producer cells, such as plants) are the cells to actually "create order" in the biosystem. They do this by capturing Carbon dioxide and water from the environment, and using light energy from the sun to bond them together and form complex biomolecules - usually carbohydrates.

These carbohydrates are then sent into the rest of the biosystem, where heterotrophs (consumers like me, you and the lion in the zoo) break them down to release their energy for tasks their cells need to do (cellular respiration, catabolism). As time passes, all that energy is converted to heat and radiated from our bodies, and ultimately by the atmosphere off the Earth (barring excessive greenhouse gases.)

Third question: Not necessarily. If the multi-cellular organism were a closed system, you are absolutely right. The chemical energy would rapidly be all converted to thermal energy, and the order would disappear entirely. However, bodies are not closed systems: they are continually radiating thermal energy and absorbing chemical energy, either from the sun through photosynthesis, or from autotrophs through ingestion and digestion. 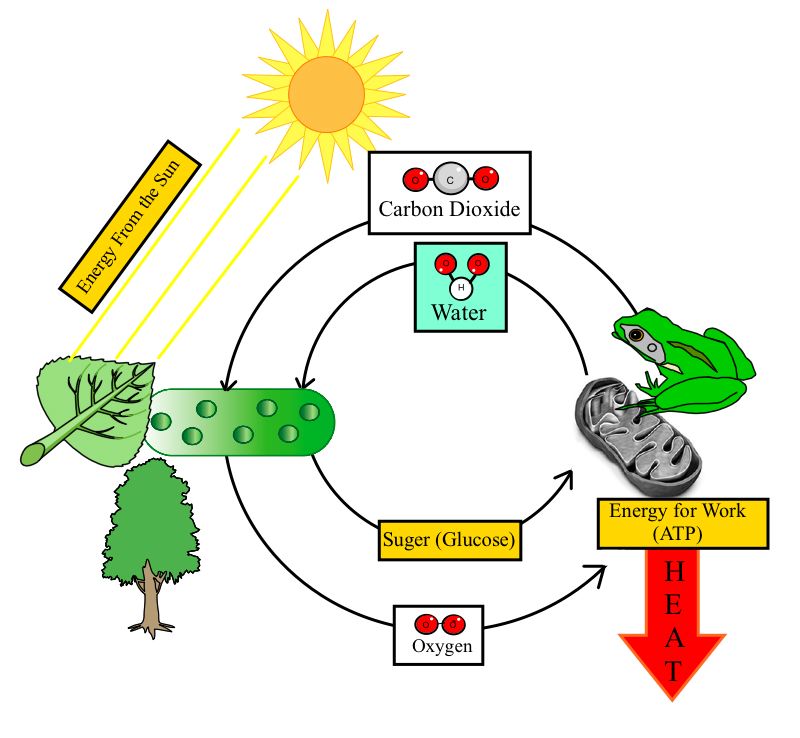 Not the answer you're looking for? Browse other questions tagged cell-biology thermodynamics or ask your own question.

10
Doesn't osmosis violate the law of conservation of energy?
0
Cell state and cell function
11
A question about the intersection of evolution and thermodynamics
0
What is the second phase of photosynthesis?
3
Is cell wall and cytoplasm an organelle?
1
Hayflick's limit and cell division
3
How are cell death like apoptosis and entropy related?
1
Understanding entropy and the second law of thermodynamics as involved in metabolic processes