Population where most of the newborns die soon?

Is there an ecological name to describe a population of organisms where most of the newborns die after birth without reproducing? The population as a whole keeps growing, however, because there are enough individuals that manage to reproduce.

The type of species you describe are the r type.

A species can vary its strategy through time and space

Species can change from K to r (and vice-versa) depending on the environment and number of individuals. Consider humans as an example.

The expression r/K selection theory can be misleading

The term "selection" in "r/K selection theory" can be a bit misleading as it refers more to a demographic reality (which has come to be due to selection pressures) but not to the selection process behind it.

The terms r and K are sometimes used to mean whether a species has reached carrying capacity (K) or whether they are growing in number (r) which is not exactly the same as the interpretation of whether there is much parental investment in the species presented in the wikipedia article.

This second interpretation is actually closer to the origin of the terms r and K. The most common (and one of the simplest) equation of population growth through time is the logistic equation (see here for an easy explanation and also wiki > Population ecology ) 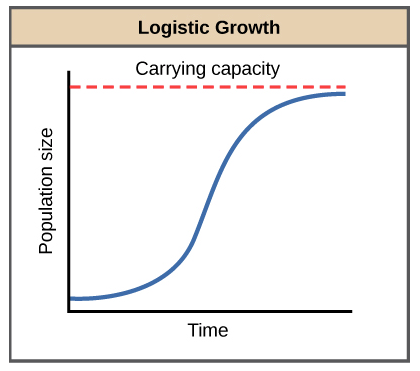 15
Do invasive species cause long-term damage to ecosystems they invade?
26
What prevents predator overpopulation?
5
History: Do evolutionary and ecological processes occur at the same timescales?
9
The replicator equation vs the Lotka-Volterra equation
4
How to introduce predators to a simulated ecosystem?
7
What is the impact of the invasiveness of the European Starling in North America?
1
How can a species switch from r to K - reproductive strategy in a single generation?
5
What is the biology behind human population dynamics?
4
References concerning the relative population sizes of predator and prey
0
Can the apparent drop in insect population be explained by local insects evolving to avoid traps?