Can a shark stall?

Today in marine biology I learned that, like airplanes, sharks use their pectoral fins to generate lift. The question that neither me or my Professor know is if a shark can or cannot stall.

A stall occurs when the angle of attack of the wing (in aircraft) is exceeded, creating stalls of wind behind the wing. This kills the lift and the aircraft begins to dive towards the earth. Even though water is a more viscous liquid (than air), could a shark suffer the same effect?

As it turns out, yes- they can. First few hints in favour would be- 1) A stall is a fluid dynamics concept; and 2) Sharks have streamlined bodies.

The source for this answer is a researchgate article: https://www.researchgate.net/publication/331145186_Hydrodynamic_analysis_of_shark_body_hydrofoil_using_CFD_methods

The study uses a real-scale image of a Tope Shark (Galeorhinus galeus). Below, you can see the hydrofoil production*.

The pressure and velocity contours are there plotted for various angles of attack ($\alpha$), which can help determine the stall angle. The following is the velocity contour: 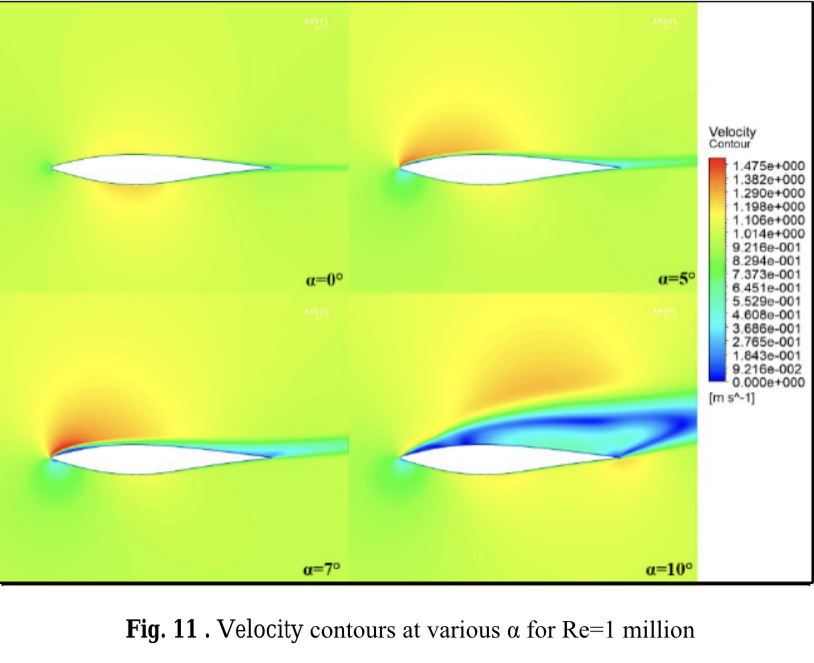 The velocity contour plot (Figure 11) shows that for α=0˚ the water speeds around both upper and lower surfaces are close to each other and the lift force at the smaller angles of attack is relatively low due to nearly symmetrical geometry. The velocity at the boundary layer of the wall is observed to be approximating to zero (blue region) at each case due to the viscous effects around the wall. Increasing α expands the high speed zone (red color) above the boundary layer of upper surface, also extends the flow separation zone which is shown as blue. It is observed that, the hydrofoil is at the condition of stall at α=10˚ due to the flow separation.

The simulations at both Re numbers reveals a stall angle around 7-8 degrees which is also verified by JavaFoil results. Beyond the 8 degree stall angle, the lift performance is deteriorating and the drag coefficient increases exponentially. This result shows that the variations in TSH swimming speed do not affect the performance behavior of Tope Shark; demonstrating the body shape of the tope shark is appropriate for a wide range of swimming velocities and is suitable for both cruising velocities and burst of speed.

Although I dont know about the shark diving using pectoral fins, i do know about sharks somewhat "stalling". They slow down movement to attack seals and whatnot. This article may help you : https://www.earth.com/news/slow-moving-sharks-strike/#:~:text=A%20new%20study%20from%20the,to%20pounce%20on%20their%20prey.&text=This%20behavior%20suggests%20that%20the,the%20best%20seal%20to%20attack.

6
Does anybody know what this shark is eating?
8
Can jellyfish sting outside of water?
18
Would a shark whip into a frenzy from smelling its own blood?
3
Can anyone tell me what type of fish this is?
4
anyone can help identify this aquatic microganisms?
3
Can Shark bodies be preserved?
3
Can anyone identify this fish?
2
How can this coral survive with little sunlight?