What are hyphal compartments?

The hyphae are the branching filaments that make up the mycelium of a fungus. Hyphal compartments are part of the hyphae. What are they exactly?

I did a quick lookup on google for "hyphal compartments" and the number of online texts/books/citations using this term is quite meagre to say the least. One of the images that I found was this- 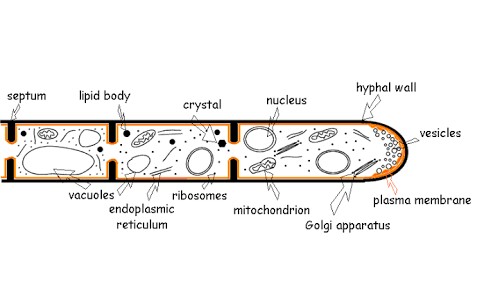 And I have reached to the conclusion that--

Hyphae cells (only in septate species) are known as hyphal compartments.

A hypha (plural hyphae, from Greek ὑφή, huphḗ, “web”) is a long, branching filamentous structure of a fungus, oomycete, or actinobacterium.In most fungi, hyphae are the main mode of vegetative growth, and are collectively called a mycelium.

A hypha consists of one or more cells surrounded by a tubular cell wall. In most fungi, hyphae are divided into cells by internal cross-walls called "septa" (singular septum). Septa are usually perforated by pores large enough for ribosomes, mitochondria and sometimes nuclei to flow between cells. The major structural polymer in fungal cell walls is typically chitin, in contrast to plants and oomycetes that have cellulosic cell walls. Some fungi have aseptate hyphae, meaning their hyphae are not partitioned by septa.

Hyphae have an average diameter of 4-6 µm.