Why is there an apparent reduction of reptile species near the Mississippi River?

The USGS Gap Analysis Program published a map of reptile species richness in the U.S. There is a conspicuous reduction in reptile richness along the Mississippi River corridor. Why might this be? 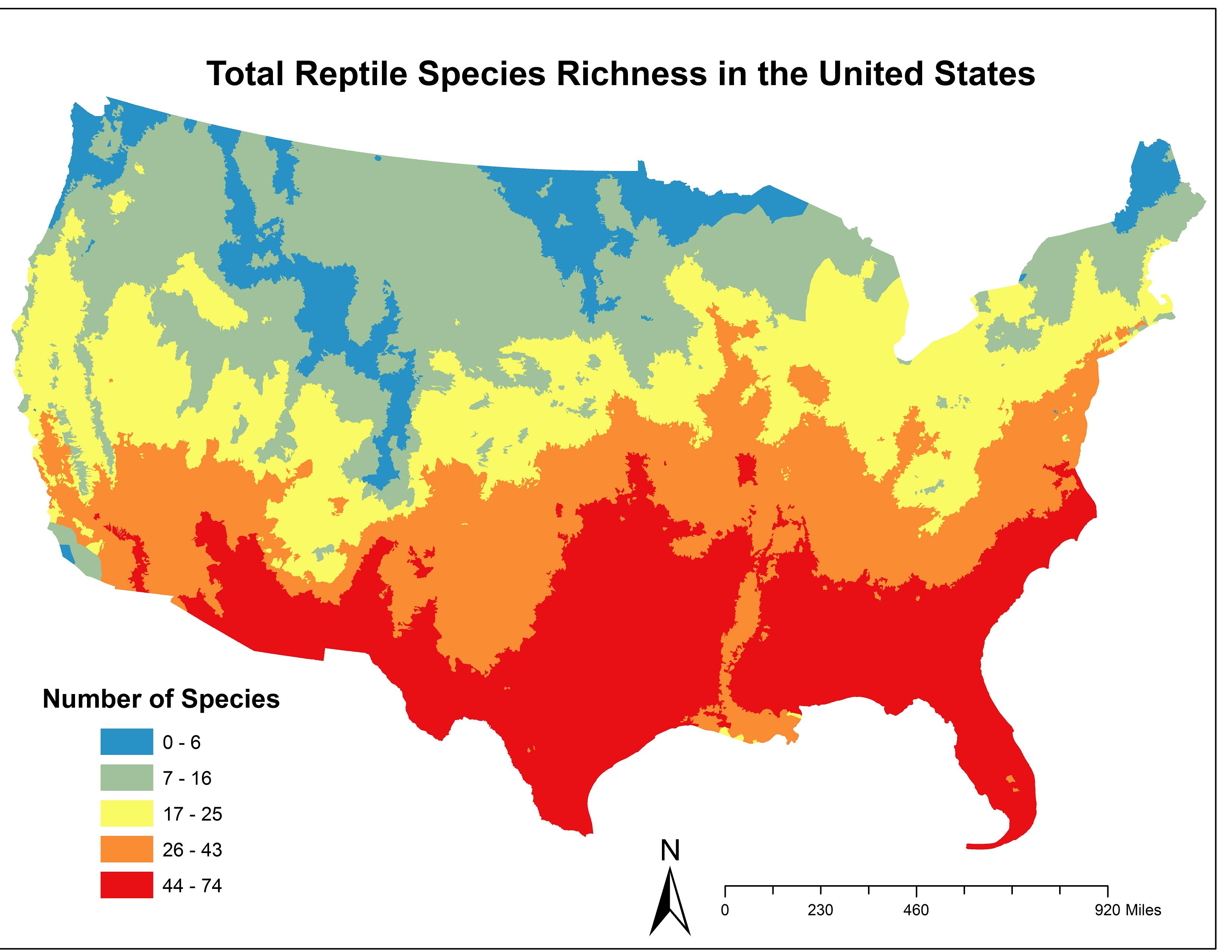 The reptiles mostly were ploughed away and replaced with soy beans.

The Silt Plain is very flat, mostly has hills left by oxbow lakes and river meanders. If you put your hand in the ground, it consists of organic matter/silt/clay/mud/fine sand, and it is very fertile until it is depleted by modern agricultural practices.

It's one of the more productive agricultural regions in the USA, and it's mostly giant square fields and mono cultures.

Here is a quote from the Discussion at the end of this review:

traditional agricultural landscapes, typically characterized by mosaic–like structures, intermediate levels of disturbance, and able to host great biodiversity levels (Bignal & McCracken, 1996), have undergone profound transformations in last decades. The rapid extension of intensively cultivated fields and the reduction and fragmentation of the original habitats have led to the creation of more uniform and depleted landscapes, with significant loss of biodiversity (Whittaker, 1975; Bull & Skovlin, 1982; Burel et al., 1998; Zechmeister & Moser, 2001; Moser et al., 2002; Pfiffner & Luka, 2003). In accordance with these changes, our analysis of reptile assemblages in an agricultural area mainly devoted to the intensive cultivation of arable lands found the landscape to be relatively poor in biodiversity. Four out of five agricultural land uses hosted only one species, while most of the recorded reptiles occurred inside a few patches of semi–natural habitats and, above all, in the grid of vegetated buffer strips interspersed among the cultivated lands. In addition, during field activity, we observed only seven of the eighteen species of terrestrial reptiles reported for the province where the sites are located, and most records were ascribable to a single species.

Reptiles and Amphibians are at the top of the insect food chain, and studies have shown that they are sensitive to pesticides, especially when their numbers are low:

By using three evaluation factors - (i) pesticide exposure, (ii) physiology and (iii) life history - a taxon-specific pesticide exposure risk factor (ERF) was created. The results suggest that about half of all evaluated species, and thus at least 1/3 of all European species exhibited a high exposure risk. Previously the region would have been host to a very tall high growth forests, because of the high temperatures, available water table of the area and fertility.

you can check pics 6 and 8 from this page to see the productivity of the region. It suggests that the reptile biomass was replaced with obese humans.

That forest has been reduced to the swamp forests where the roots are covered in stagnant water for most of the year, where some large aquatic reptiles take refuge, and which is completely different than the lost forests of the Mississippi plains.

The old forests would have perhaps been similar to florida's inland forest, and perhaps very different, because of the available water table, and much more productive silt, than florida's ground allows for. I didn't manage to find photos of the lost forests of Mississippi plain regions, they would have been dense, producing 3-7 times more biomass than normal forests.

6
Why is the floral biodiversity of grazed grassland higher than that of mown grassland?
10
Is there a hypothesis that attempts to explain patterns of species richness along all three energy-related environmental gradients?
4
Why are Oxyuranus snake species named Taipan?
4
Minor differences in morphology of a snake: Why designate it a different species?
2
Why is there extreme itching when we touch a hairy caterpillar? What are ways to stop itching?