Does the leaves of papaya plant help in increasing platelets in a case of dengue?

In Kolkata and nearby regions, due to sudden and huge amounts of rainfall, there has been an outbreak of dengue, a disease spread by female Aedes mosquitoes. The outbreak has been so dangerous that dozens have already died in the villages.

A problem of this disease is that, the platelets in blood are decreasing abnormally. For example, a patient had 120 thousand platelets when checked at night, but when checked on the morning, it drastically reduced to about 20 thousand. This particular patient could not be saved.

Many people say that the juice of papaya leaves (leaves of Carica papaya) helps in increasing the platelets in blood. Some doctors say it's wrong, while others say that it does effectively help. Even tablets and powders have been made, but the confusion persists as to whether they are effective or not.

I could not find any good information on the net. Can anyone, with scientific arguments, answer this question?

So With some digging, I found some articles/presentations that provide evidence that fresh papaya leaf extract does increase platelet counts. The first link tested this in a rodent model and found that in the test group treated with the leaf extract, there were significant increase in platelet count and red blood cells (RBCs) from the control group. Here is the summary of their results trend from the paper:

Additionally, I found a Multi-centric, Double-blind, Placebo-controlled, Randomized, Prospective Study and a meta-analyses that supports the observation that papaya leaf extract does in fact show statistically significant increase in platelet count than that of the control groups. (Dengue fever causes platelet counts to plummet). [#2-3] Below is the image of platelet counts from the Multi-centric, Double-blind, Placebo-controlled, Randomized, Prospective Study (2): 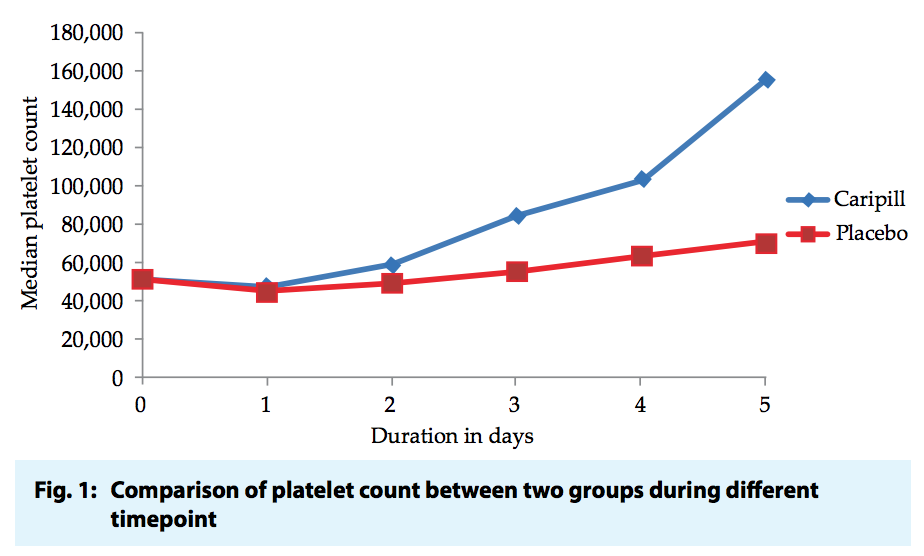 However, the mechanism by which this occurs is not well understood. According to the 4th article, "The secondary metabolite of plants origin makes up a vast repository of compounds with a wide range of biological activities". The presentation (5) states some possible mechanisms by which the extract can inhibit the Dengue virus/vector.

Not the answer you're looking for? Browse other questions tagged human-biology biochemistry or ask your own question.

2
How does GTP help in the step of codon recognition?
5
Does the formation of water inside the mitochondrial matrix help contribute to the proton gradient during the electron transport chain?