Why are the neurites from hair cells to spiral ganglion cells called axons?

In Kandel's Principles of Neural Science I found the following figure which shows the innervation of the organ of Corti: 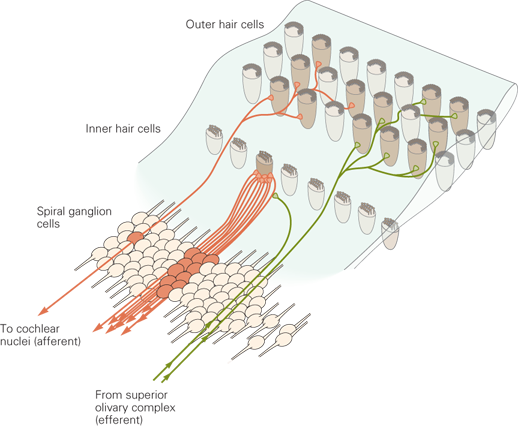 "The great majority of afferent axons end on inner hair cells, each of which constitutes the sole terminus for an average of 10 axons.[...] Efferent innervation of inner hair cells is sparse."

BUT: The depicted axons that "innervate afferently" hair cells seem to go into the wrong direction (downwards, not upwards). What do the (red) bulbs touching the hair cells represent. I guess synapses, but which one is the presynaptic and which one is the postsynaptic neuron? (I guess: The hair cell is the presynaptic neuron - it's a sensory neuron! But then the neurites emanating from it would be afferent dendrites of the ganglion cells, not axons. I'm lost. Might it be the case that transport along these neurites is active - like in axons, not passive like in dendrites? Or are they called axons because they are myelinated? Or is it because in bipolar cells it is not distinguished between axon and dendrite?)

Question: Why are these neurites called axons?

I believe to understand now, thanks to @AliceD's answer to this question:

Why are Merkel cells innervated by an axon, and not a dendrite? 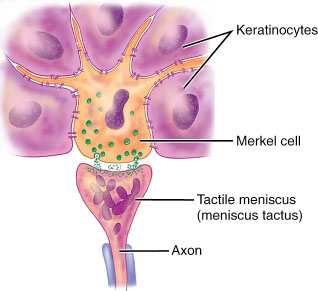 Not the answer you're looking for? Browse other questions tagged neuroscience neurophysiology neuroanatomy hearing or ask your own question.

4
Why are Merkel cells innervated by an axon, and not a dendrite?

4
What are the functions and differences between axons and dendrites?
4
What is the relationship between W, X, Y and P, M retinal ganglion cells?
3
What determines the shape of the center-surround receptive fields of retinal ganglion cells?
2
Why are the posterior and anterior inferior temporal cortex called area TEO and area TE respectively?
2
What is the signal conversion from hair cells to cochlear nerve cells?
2
Vision: what is the difference between on-off ganglion cells and lateral inhibition?
2
Why is the ratio between action potential and threshold value called the 'safety factor'?