What does C. Elegans sense when touched?

I'm reading up on C. Elegans' touch responses. Once touched, what is it that the neurons are sensing, specifically? Presumably, touch deforms the body cells, and that deformation is sensed by the sensory neurons. Is that correct? Alternately, are the neurons themselves directly stimulated due to the organism's small size? (Or am I way off?)

In short, you are correct. You touch the skin, and that compresses mechanoreceptors, which then generate a cascading neuronal response.

As far as the actual neurons, it really depends on the type of touch. For example, a well characterized type is gentle mechanical stimuli, which can involve ALM, AVM, PLMs, and PVM, depending on the response (Will Schafer's review doi: 10.1007/s00424-014-1574-3).

Those gentle touch receptors (TRNs) are in the hypodermis, and they have specialized mechanotransduction (MeT) channels along their neurites. It's the altering of those channels that causes receptor activation and the whole downstream behavioral response (summarized from the scientific reports paper below). 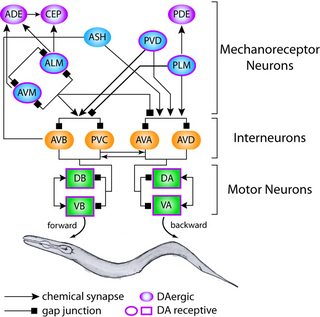 There are many other mechanosensation mechanisms, and WormBook is the place to see a ~comprehensive review of those.

The actual mechanical mechanism/way that MeT channels are activated is a great enough question that a recent paper was published in Scientific Reports to address it. That paper is DOI:10.1038/s41598-017-12190-0 (Elmi et al. Determining the biomechanics of touch sensation in C elegans).

They introduce the paper reiterating what I summarized above.

[...] touch sensation can be considered as a chain of events initiated by the spatiotemporal distribution of mechanical loads applied to the skin, which result in stresses that deform the skin’s surface, sub-layers and underlying mechanoreceptors. In response to the transmitted mechanical energy, the mechanoreceptors activate a neuronal signaling network that encodes the physical contact as information which we perceive as ‘touch’.

Elmi et al. set up a clever assay to look at how the worm's body changes. The body is pretty elastic (up to 16 micrometers) and there's some imperfect skin displacement because the body isn't perfectly cylindrical.

They used that data to build a preliminary model of the different layers of a worm body, and then they validated and tuned the model. It's a cool paper (with some math/physics, which from your profile it looks like you might appreciate).

Not the answer you're looking for? Browse other questions tagged touch or ask your own question.

10
Why does it hurt more when you touch a nerve directly?
6
What exactly is the neural receptive field?
1
What could cause no pain but sense of touch?
7
What stimulates a nociceptor?
8
What is the smallest touch sensation that a human can feel?