What is the function of the Hyoepiglottic ligament?

The hyoepiglottic ligament (ligamentum hyoepiglotticum) is an elastic band that connects the epiglottis to the hyoid bone.

Although I can find information about the clinical significance of this ligament (mentioned here), I have not been able to find a definitive or reputable description of its actual physiology/function.

Can anyone provide a reputably-supported description of the function (physiology) of the hyoepiglottic ligament?

My thought was that the hyoepiglottic ligament might act as a see-saw during swallowing. Specifically, my assumption was that as the hyoid is raised during swallowing (thus raising the hyo- end of the ligament), the opposite end of the hyoepiglottic ligament (attached to the epiglottis) is pushed down, forcing the epiglottis to cover the glottis to prevent food stuffs from getting into the trachea. Is this possibly right?

It's an interesting question. This 2010 paper contains some discussion of the function of the hyoepiglottic ligament. The following is a quote from the introduction:

In the study, the authors demonstrate histologically that the hyoepiglottic ligament is bipartite, with a part they call the pars hyoideus connecting the anterior epiglottis to the hyoid, and a part they call the pars lingualis connecting the epiglottis to the root of the tongue (they claim that this attachment to the tongue was previously unreported). Another quote from the paper follows:

It is suggested that the pars lingualis plays an important role in active mechanisms such as upward movement of the epiglottis during phonation associated with tension of the lingual muscle and supraglottic airway patency during respiration.

To get some idea of how tension in a ligament anterior to the epiglottis can cause posterior movement (i.e. closure of the epiglottic 'flap'), I found this 1979 paper useful. They used cinefluorography to investigate the biomechanics of the epiglottis. The following lengthy quote should help to clarify the proposed model:

The radiographic observations indicate that at the peak of the deglutitional excursion of the hyoid bone and the larynx the following circumstances prevail:

(1) Forward translation of the hyoid bone in conjunction with extreme thyroid-hyoid approximation causes extreme elongation and tension on the hyo-epiglottic ligament at its attachment to the margins of the epiglottic tubercle.

(2) The compression of the median thyrohyoid fold, secondary to extreme thyroidhyoid approximation, tends to make the epiglottic tubercle bulge backward transversely as well as vertically.

The principle of the mechanism of folding deduced from these observations is demonstrated in a working model that can be set up in a few seconds. All that is needed is a rectangular piece of fairly stiff paper. The piece of paper represents the complete epiglottic cartilage (epiglottis and tubercle). A $\Lambda$-shaped crease is applied at the center (Fig. 4) to simulate the groove on the back of the cartilage, between the epiglottic tubercle below and the epiglottis proper above. One next applies stress to the model from the opposite side, at the site of attachment of the hyo-epiglottic ligament. This is done by grasping the paper lightly at the edges, below the level of the crease, whereupon the part above the crease, representing the epiglottis, immediately begins to fold down. Each limb of the crease functions as the directrix of a cone; the apex of the crease is the vertex of the cone. When the paper is gripped the directrices rotate towards each other and pull the attached paper after them, giving it a conical shape.

I've attached the figure 4 from the paper to illustrate better (I'm not sure if that's allowed on SE; please delete it if that's appropriate): 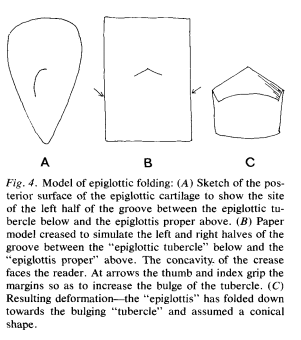 The authors of this paper and this paper argue that the model just given does not fully explain the motion of the epiglottis during swallowing. The latter paper describes the existence of distinct lateral hyoepiglottic ligaments attaching to the ends of the greater horns of the hyoid bone. These, they argue, transmit the biomechanical forces generated by the movements of the hyoid and thyroid cartilage to the epiglottis to cause downfolding, although their full argument is too long to reproduce here.

Hopefully all of that has shed a little light on the possible function of this ligament. It seems to be quite complex, but there appears to be a relative consensus that the transmission of tension via this ligament is important in causing the folding down of the epiglottis during swallowing.

Not the answer you're looking for? Browse other questions tagged physiology human-anatomy human-physiology anatomy or ask your own question.

4
What is the function of epiglottis?