Can humans breathe an Argon-Oxygen atmosphere, where Argon substitutes the inert Nitrogen gas which currently populates our atmosphere? I didn't quite know which forum to stick this one in; I put it here because I only want to know if such a mixture of gases can be feasibly inhaled, without the prospect of early death by some physiological component.

One may think that Argon, being an inert noble gas, causes no harm at all and can perfectly replace N2 in a mix with oxygen. After all, you've been breathing Argon your whole life, since approximately 1% of the air is Argon: 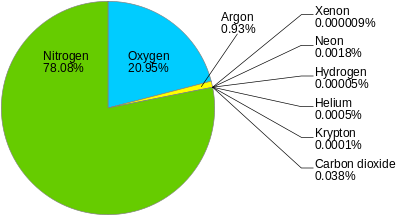 However, we are talking about a raise from 1% to 78%... and there are possible consequences here:

As an additional information, there is an Argon-Oxygen mix, called Argox, which is used for decompression research only, not as a scuba-diving breathing mix.

In conclusion: this Argon-Oxygen mix is not harmless.

Not the answer you're looking for? Browse other questions tagged physiology human-physiology cellular-respiration respiration or ask your own question.

3
Source of hydrogen in reduction of oxygen in electron transport?
2
Does the necessary Carbon Dioxide need to be in the atmosphere for mammals?
2
Why is an increase in the amount of oxygen in the atmosphere favorable for life?
8
How much oxygen does a plant use up at night?
5
Cooperativity of haemoglobin and oxygen dissociation curve of haemoglobin
15
Why does a worm's skin need to be wet for oxygen to diffuse across it?
1
Could humans breathe if the average methane content of the atmosphere increased to 1%?
1
What is the benefit of oxygen tanks to persons trappped in an enclosed space?